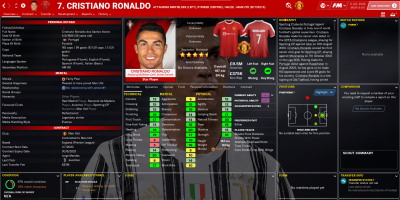 Hello, I have taken the official Sortitoutsi data update and updated squad numbers for the 21-22 season.

The update includes correct squad numbers (up to the published date, future updates to come) for the following leagues:

I have also created Kyogo Furuhashi, Luka Romero and Keita Endo and added them to the Celtic, Lazio and Union Berlin squads respectively, using info from Transfermarkt and stats from FIFA 21, which I converted to FM21 stats.

Please let me know if you spot any mistakes or missing numbers. I may also consider taking requests to update other teams' squad numbers, if there are any particularly popular teams that I have missed.

This file will work alongside all other Sortitoutsi files and should be placed in your editor data folder.

Hi @Day Tripper  , do you have any tutorial how to create and add a new player to the team. I got 1 player form SS Lazio (the name Luka Romero , move from Mallorca B) and until now still not include in the Sortitoutsi Data Base. Thank you….

I have already added this player to this file 🙂

I have already added this player to this file 🙂

can u do scottish leagues please

can u do scottish leagues please