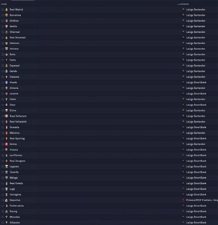 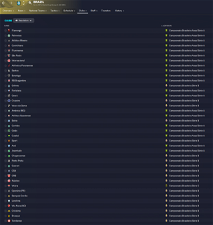 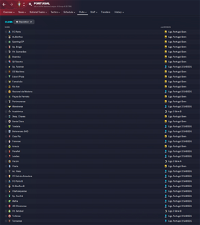 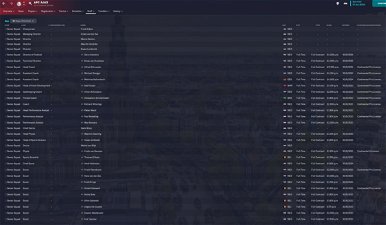 Subscribe to this thread (by following these steps) so you get notifications whenever a new version is released.

If you have any issues, first read the FAQ.

This file will need to be re-applied if/when official patches/updates are released to ensure full compatibility. This is due to the fact that some files which are removed when installing this file are automatically re-installed by Steam when official patches come out.

Some of these changes, ESPECIALLY THE CLUB NAMES, do NOT apply in existing save-games. There's a workaround for that in the first post.

The sortitoutsi real names fix changes the instances of fake names in Football Manager 2023 to the proper, real life names for awards, cities, stadiums and competitions, in cases where the actual name is not licensed, such as  Premier League displaying instead of Premier Division. It will also fix the fact that the German and Japanese National teams don't call up real players. These are all fully save-game compatible.

There is also a club name changes file, which changes the names of clubs in a way which ensures that any nicknames entered in the default database are retained. This file includes the proper names for Brazilian, German, Spanish, Portuguese, Italian (including Napoli) and French clubs, as well as Manchester Utd, to circumvent licensing restrictions. It also adds real-life media and journalists, encompassing most major footballing nations and continents. Brazilian clubs' text colours are also changed through an editor data file. Another editor data file creates the Ajax non-playing staff and the German national team manager missing from the database due to licensing restrictions. Finally, it includes a small file which corrects the 3-Letter competition names to correspond with any changes made in the lnc files. For all the files in this paragraph to work, however, you will need to start a new game.

Follow the below instructions to install this version of this file

I am led to understand that mods are enabled by default this year, so nothing needs to be done other than the below

For Mac Lion users, the Library folder will be hidden. Use this link to find out how to show it.

For those struggling to find the Steam and Steam Apps folder etc using Mac with the new OS High Sierra, this link below shows how you can unhide your Library folder which will then let you find the other folders.

navigate to drive it was installed in (C: or D🙂

If you can't find where your Xboxgames folder is, you can find it by clicking on “More actions” button (three dots that appears when you move your mouse cursor over Football Manager 2023 on Xbox app), then “Manage” → “Files” tab → “Browse…” button.

if game is store on external micro SD card

if game is stored on internal storage

STEP 2:
COPY the dbc, edt and lnc folders from the downloaded pack

STEP 3:
PASTE them into each of your respective folders mentioned in step 1.

These are what the respective folder structures should look like in the 2300 folder:

STEP 4:
COPY the 9 files located in the EDITOR DATA FILES folder in the downloaded pack

This is also the same folder to be used for Gamepass.

By default this folder is hidden, so to access you need to do as follows:

Open Finder
Click ‘Go’ from the menubar
Press and hold down the ‘Option’ (Alt) key
This will bring up the ‘Library’, click to enter then go to ‘Application Support’ -> ‘Sports Interactive’ -> ‘Football Manager 2023’

This should be what your editor data folder looks like now. There may initially be a config.xml file in this folder and it can be safely overwritten; it is generated by FM every time the game starts.

To make sure the files have been applied correctly, go to English Premier Division in your saved game, and it should be renamed to Premier League. If you are in the middle of a save-game when you install this download, Japanese and German national teams will be populated in the next instance that players are called up, and not immediately. Do keep in mind that this file does not add Japan-based players, who are not in the official database and will need a third-party add-on to be created and added.

Club names are only changed if you apply the editor data files before starting a new game. For a workaround if you've already started a new save-game, then please read the opening post of this thread.

Sure, here we go.

Sure, here we go.

Looks good. Can I see a screenshot of the folder it's located in?

I can't see anything wrong, either in the lnc file or the file structure. You have closed down FM and started it again, I imagine?

What's in your editor data folder?

I have closed it, closed steam, tried everything haha.

I have closed it, closed steam, tried everything haha.

Manchester United and Napoli that I can see at a glance.

Manchester United and Napoli that I can see at a glance.

Are you playing in a non-English language perchance?

Are you playing in a non-English language perchance?

Found it! In the db folder, there should be a folder titled 2300, in which the files from this download are to be saved.

Found it! In the db folder, there should be a folder titled 2300, in which the files from this download are to be saved.

that fixed it. Thanks heaps.

I follow step by step the guide e all is done, i don't know because the Ajax staff file dosen't work.

I'm the only one whit this problem?

I follow step by step the guide e all is done, i don't know because the Ajax staff file dosen't work.

I'm the only one whit this problem?

Did you install it after starting your save game? Can you give us a screenshot of where you placed it?

Sorry guys it's my fault.

I read after, the problema is the dimension of DB.

Hello I have the same problem with Manchester United.
I took a different logo pack and unfortunately the problem still exists.
So I don't think it has anything to do with the pack.
Thanks for your help.
Greeting
dirk

I also have this problem. What's funny is, that when i downloarded this zip and installed it two weeks ago, Manchester United was shown with the logo. Several days ago, I realised, that it's gone. Thought, that there might have been an update, but no. Can't see the problem

Romanian first division needs fix, it's SUPERLIGA since this year.

Romanian first division needs fix, it's SUPERLIGA since this year.

I have some minor changes

I have some minor changes

@mons  at what time is the release from V.1.3? This weekend?

@mons  at what time is the release from V.1.3? This weekend?

No plans to do so that soon. Will be aiming for release when the next official update is released.

in the “Serie D girone B” it’s not “ ASD Chievo-Sona” it’s only “ASD Sona”. Please check also the name of “Chievo“,it was “ChievoVerona“,not ”ChievoSona”.

in the “Serie D girone B” it’s not “ ASD Chievo-Sona” it’s only “ASD Sona”. Please check also the name of “Chievo“,it was “ChievoVerona“,not ”ChievoSona”.

It's one of the fixes in v1.3, which will include a review of Italian lower-league club names.

It's one of the fixes in v1.3, which will include a review of Italian lower-league club names.

V1.3 will include some changes to Turkish club names. This particular one was suggested here and was added for v1.2.

Not entirely. This is the official name as per the Turkish Football Federation's official website, i.e. it's correct in this download.

I'm not sure how you didn't find anything online about it @GingaMilla.FM - the first and second results in a Google search refer to it 😕