1 hour ago
Mark! commented on: Latest FM update 1 hour ago
A new version of our data update was released with 91694 changes from 364 contributors.

2 hours ago
lembergman commented on: 3D Official Kits Thread 2 hours ago
A new version of our data update was released with 91676 changes from 364 contributors.

3 hours ago
mons commented on: Please help- trouble getting any skins, logos etc to work

3 hours ago
Ben Getty commented on: Please help- trouble getting any skins, logos etc to work

3 hours ago
Ben Getty commented on: Please help- trouble getting any skins, logos etc to work 3 hours ago
A new version of our data update was released with 91640 changes from 364 contributors.

4 hours ago
lolmappo commented on: Lets go on a European journey, man! 4 hours ago
A new version of our data update was released with 91631 changes from 364 contributors.

4 hours ago
leftfoot commented on: Facepacks Release thread - NO REQUESTS

6 hours ago
Load FM! commented on: FM20 - A Wandering Dork

Susie On Tour - #2 The Leverkusen Curse

I kept the transfer pretty tame compared to some people, not wanting to overhaul the squad too much, as we had a fairly successful first season. Obviously Toprak left for £10.15 million, followed by Leon Baily for £5.75 million (£8 million) to RBL. The other main leaver from the club was Julian Baumgartlinger to Inter for £7.5 million.
Coming in we saw 2 main deals. Matija Nastasic for £15 million from Bundesliga rivals Schalke, along with Javier Pastore from PSG, a fine coup for us costing £14.25 million. Yaya Toure and Fernando Torres also joined us, both on a free, just to add some back up to the squad. Next up, lets look at the Super Cup. A victory over last seasons Bundesliga champions FC Bayern. We went into know we could beat them, but we went a step further than that and trounced them! A huge 4-0 result to lift the silverware. Onto the league campaign! We got off to a good start, not losing in our opening 6 matches, winning 4 and drawing 2 of those. Then it went downhill, rather quickly. Several losses started to creep in, and our morale was getting low. A run where we couldn't string 2 wins together really knocked us for the rest of the season. Something we never really recovered too well from. The second half of our season was better, however, it wasn't good enough to see us match last seasons successes. We fell 13 points short of last seasons points tally. Pretty disappointing to say the least. The poor runs of results were always going to leave it tough to get a decent finish. There was no title fight for us like the previous year. Infact, we were fighting to hold onto 3rd place.Dortmund ended up champions, 3 points ahead of Bayern, before 9 point gap between Bayen and ourselves. Another top 4 finish was not a terrible result though, but we know we could've gone a lot further. The German Cup saw us easily through the first 2 rounds, beating Wurzburg 3-0 and then Bielefeld 2-0. From there it got a bit tougher. A 3-2 win over Bremen in the 3rd round kept us in the cup. Hamburg were our quarter final opponents, who we beat 3-2 after extra time toset up a tie vs Wolfsburg in the semi final. We were denied a final appearance by a 90th minute equalizer, as we battled away with 10 men due to an injury after our subs had been used. Into extra time we went, and we just didn't have it in us to beat the hosts. We went 2 down before grabbing a consolation goal to finish 4-3. We faced a tough Champions League group, after being drawn with Barcelona, Inter and Feyenoord. We opened with a 2-0 defeat to Feyernoord, before beating Inter in Germany 2-1 to get our first points. Next up, Barcelona visited us. A close game, but we blew a 2-0 lead to end up losing 3-2. 3 big points wasted! The return leg went as horribly as possible Aranguiz got sent off in the 9th minute, before we went on to lose 8-1 to the Spanish giants, with Luis Suarez scoring all 8! We recovered from the to beat Feyenoord 4-2 at home and Inter 1-0 in Italy. We finished 2nd, and earned ourselves a very tough tie vs Real Madrid. A positive goalless draw at home in the first leg gave us hope that we could snatch the tie with an away goal. But it wasn't to be. The 2nd leg ended in a 5-1 defeat, and that was the end of the road for us in Europe this season.

Season 2 complete. I never play with bigger teams in the game, however I really enjoyed this challenge. I had a team coming along and im sure if I carried on I would win the league and eventually become a dominant team in Europe. Here is my results.


Transfers
I kept leaking goals at the back, what was really annoying. I didnt have to much money to start, however a few sales of unhappy players, including Bailey, generated enough money to buy Dijk, who turned out to be a decent signing for me. Lozano, what a player! South American POTY, and become 4 1/2 star rating, with a new assist record in one season. Results
I started average, knocked out the cup early, out the European Champions Cup to Arsenal in the 1st round, gave me time to concentrate on the leg. I was top, until I lost to Freiburg, and you will see the outcome! 
League
2nd. What a kick in the teeth. Sooooo close, yet so far. Freiburg loss near the end put me second and I just couldn't catch Bayern after. 
Manager Of The Year
No even in for a shout of runner up this year. Pretty understandable to be fair.

I have added your scores to the leader board for stop two and the overall leaderboard. Please go check they are correct, I believe they are. All making moves into positive points and climbing the table nicely
FM20 Career: 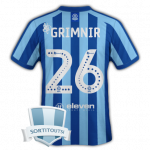 Is the third leg announced today? Could always use a jump start of a weekend to get into it myself! Just like we did for this one.
Sometimes you have to stand in the shadows; to see the light.

However I will see if I can master something up later
FM20 Career:

I'll try sort something tonight fellas for those that want it. Looks Like its a wet weekend down here anyway so won't have anything better to do over the weekend! I've got a couple smaller ideas so will piece it together and try post it later this evening.
FM20 Career:

I'll try sort something tonight fellas for those that want it. Looks Like its a wet weekend down here anyway so won't have anything better to do over the weekend! I've got a couple smaller ideas so will piece it together and try post it later this evening.

I've just got weeding to do so please anything to distract me from that!
Sometimes you have to stand in the shadows; to see the light.

I've just got weeding to do so please anything to distract me from that!

I've just got weeding to do so please anything to distract me from that!

Great if it's up there, no pressure if not! Looking forward to seeing what your creativity brings

Don't panic, the weeding isn't being done this weekend! I've figured out stage 3 of the tour, I've just got to run the normal sim through the season to check everything over as its a league I'm not too familiar with and then it'll be posted some point around 9pm I imagine! It'll be a cracker, looking at being a 1 or 2 season challenge again.
FM20 Career:

Dans Journey Around the World
Comments are now closed, no more comments can be added