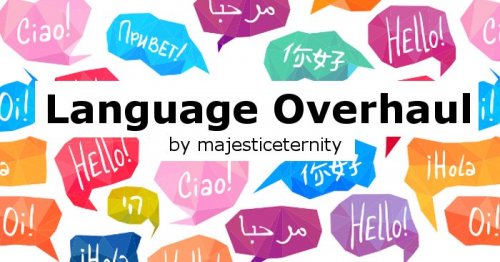 **This file changes the way languages work. Please read below, so you understand what you are getting.**

Languages in FM are very simple, and generally apply to an entire nation. This is very unrealistic, when language in real life is endlessly complex, and not all people of one nation speak the same language. The original database has less than 120 languages, while in real life there are over 6,000, not to mention each language's regional dialects.

It's also wildly inaccurate: FM has USA listed as 100% English and 100% Spanish, while in reality Spanish speakers(native or learned) totals only about 25%. FM also has Germany only capable of speaking German. Yet, studies show 63% can speak English, 18% French, 9% Dutch, etc.

Players also pick up languages far too easily. Any national language is learned in one or two seasons to Fluent level. For example: A 20yr old from Georgia spends 2 years in Belgium and becomes FLUENT in 3 different languages at the same time.

The regions and cities your players come from and play in are now important.

The 46 new dialects were created to do multiple things:

1. Add a sense of culture. The idea that a player also has to fit in with the region's specific culture, their teammates' and clubs' way of life. That a strong accent, a lack of full language understanding, and a different way of life may still divide a player from another, until they learn that area's culture, and adjust to it.

2. Add the idea that language/dialects/sounds are learned over time, with experience and exposure. A teenager is not a master of all language. A 16yr old American may have a tough time understanding someone from the UK, but as he spends time with them, he's able to tune his ears, and easily understand them.

4. Adds the idea that players and staff have to adjust to the new club, new surroundings, the clubs' DNA and culture.

There are endless dialects, but the ones chosen for FM were based on: how generally difficult they are for foreigners to understand, how different the culture is, if they have a distinct accent, and also if they have different words, meanings, grammar, or slang that would be unknown to others.


The New World of FM Languages:

Newgens:
Players from the SAME nation may not understand each other at first. You now have to pay attention to where they are from.
(Example: In Italy, your players may speak Italian AND a dialect, or ONLY a dialect.)
Youth can be culture-shocked
(Example: A 16yr old from Sicily, an island in Southern Italy, may have a tough time leaving his home and adjusting to the busy city of Rome. Or a youth from the rural Tibetan area of western China would have to learn an entirely new culture and language if he moved to Beijing, the 3rd most populated city of the world.)
Regions are now very important. They have certain languages set according to their real life versions.
(Example: Liege region of Belgium speak mostly French, while East Cantons speak mostly German, and Vlaams-Brabant speak mostly Dutch and some French)
Multilingual people are also region-based
(Example: Originally USA was 100% English, 100% Spanish. Now, those who also speak Spanish are located primarily in the states that border Mexico.)
Regions bordering other nations have language overlap
(Example: The Brazilian border areas have Spanish speakers. The Czech areas bordering Slovakia have Slovakian speakers, whereas those bordering Poland have Polish speakers)
Minor languages are minor, instead of encompassing the whole nation)
(Example: Peru was Spanish 100%, Aymara 50%, and Quechua 50%. Yet, Wiki says native speakers are Spanish 84.1%, Quechua 13%, and Aymara 1.7%. Also Quechua and Aymara are limited to their 15 real life regions, not all 25.)
Some people may not know the official national language
(Example: Some Spanish speakers living in the USA may not speak English)
Youth will likely know their regional dialects, and in big cities will also know the standard language
(Example: In the Shaanxi-sheng region of China, a 16yr old from the big city of Xi'an will know Mandarin Chinese, and may know the region's dialect. But a youth from much smaller Huangling will probably only know the dialect.)
Large cities tend to have many more people who are bilingual/multilingual
(Example: Brussels region of Belgium have those who speak French, Dutch, English, some German.)
Small cities and rural areas tend to stick more with their regional languages or dialects
(Example: People in the Hainan province of China primarily speak Min Chinese, not the general Mandarin Chinese of the nation)
Big cities teaching English from elementary school have many English speakers
(Example: Dakar, Senegal has many English speakers, while those more inland and rural only know their African language)
The amount of people in a nation who know English is more accurate
(Example: Originally Brazil was 50% English speaking, yet they are #59(Low) on the EPI, and Wiki says "Only 3 percent of Brazil’s population speaks English fluently". So while a decent percentage may speak English, it is at a basic level.


Foreigners:
Age and experience makes it easier for a player to fit in a new squad
(Example: An Italian player who has played in several clubs all over Italy would have no problem moving to Rome, as he has learned the slang/accents/culture of many Italian regions.)
Club careers shape more unique players, as they learn the language of their club's city, not nation
(Example: 2 players move to Germany, then Belgium, then China. One learns High German, French, and Wu Chinese. The other learns Central German, Dutch, and Hakka Chinese.)
Players that know a dialect will find it easier to pick up another dialect of the same language
(Example: A player who knows Spanish and Italian, who spends 1 season in Liverpool, England, will only have a basic knowledge of Southern British English. But a player who is fluent in English, who spends 1 season in Liverpool, England, will have fluent knowledge of Southern British English.
Foreigners will generally learn the main, more national or global language in big cities.
(Example: If playing in the big city of Xi'an, they will learn Mandarin Chinese, and not the dialect. )
Foreigners will be more attracted to the bigger cities of nations with many English speakers, where they can much more easily adapt, than choosing a small town where the local or national language is spoken
(Example: In the Netherlands, a player moving to the large Amsterdam city can get by with English, and will likely learn English if they don't know it already. But in much smaller, rural cities they will need to speak/learn Dutch.)
If the nation has many English speakers, but the area mostly speaks their national language, the player won't pick English up enough
English speakers from the UK will have an easier time understanding other UK dialects than Americans will

Note on Dialects:
Every player/staff has a default language and additional known languages added in the database, and unfortunately these do not change unless edited specifically. So, you may join an English club, and find that your players and staff do not know the "language", which is now a local English dialect. Don't worry, no language courses are needed. They already know English, so by the end of the season, they should all know the dialect.

Manager Job Appointments:
This also changes the jobs you can receive, as clubs may prefer someone who speaks the language. Even if you speak English and have the correct qualifications, you may not be welcomed with open arms to Manchester City or Newcastle United. Remember, you have to know their culture too!

Let's say you're managing Stuttgart in Germany, so German speakers are preferred. You send your scouts the top countries, one of them being Spain, looking for a new first-team defender. A scout recommends a Spaniard who is just what you're looking for. You think, of course he doesn't speak German. So unfortunately, you either have to pass, or pay for an intensive language course and wait for him to adapt. Actually....looking at the Scout Report, you realize he speaks some German! How is this possible? Well, he's from the region along the Mediterranean coast that has many tourists, especially from Germany, and over time has picked up some German.

Or maybe you're managing LOSC Lille in France, and some of your players are from a region near the Spanish border. One speaks some Catalan, and would be perfect to help you welcome that Spanish defender Stuttgart wants! Do you make a bid? Or do you stick to French speakers, and sign the USA wonderkid from Louisiana?

This file opens up a world of possibilities! Endless storytelling, yes, but it also means that other features in FM are more important.

Scouting Reports matter more. Sending scouts to nations involves more strategy. Can you find the places outside your club's nation, that have players who speak the same language? Scouting nations like Belgium who can speak multiple languages may be a priority. Conversely, a club in the French region of Belgium may have to scout France and search for more French speakers. A player's Adaptability matters more, both in other nations and in the same nation. Managing a club in a smaller town may mean a club in a big city will always have an easier time convincing a player to join than you do. A big club may be able to build a squad of players all over the world, while a smaller town club may have to stick with players from the same region, until a proper squad is built. Squad Building has a whole new level of depth added to it. The languages your starting squad speaks may shape the rest of your squad building decisions, or you may heavily rely on shelling out money on language courses, or even put a priority on players with high Adaptability. You may need to more gradually bring a new player into the first team. A Club Vision to sign players from a certain nationality may determine the rest of the players you buy, as they need to speak the same language. A Club Vision to sign youth players may mean you must choose the clubs to loan them to more wisely, as you want them to learn the language of the team.

There are so many new aspects to this, that hopefully you enjoy the new challenges, and the fact that languages matter a bit more than they used to!

Place in Documents\Sports Interactive\Football Manager 2021\editor data. Start a new save. When selecting the database(before Advanced Setup), be sure to select the checkbox to enable this file.

If you like this creation, and wish to support the hours of work, you can donate below:
(Please know that it will be very appreciated, as everyone in my family have lost their jobs since March)

Does this work for Touch version also?

No, sorry, I believe fmf editor files only work for the full game

Got a Question about Germany

I'm not sure why Frisian is twice....

There is Low, Central, and High German, yes.

Because Bavarian is of the West German language family.

Got a Question about Germany

Maybe you're confused with the Dutch Frisian?