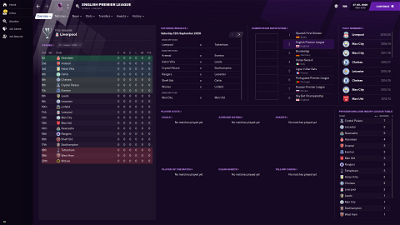 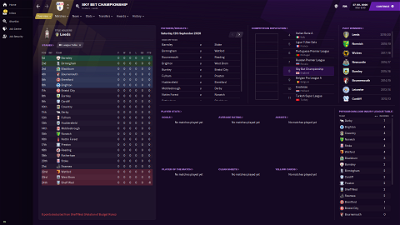 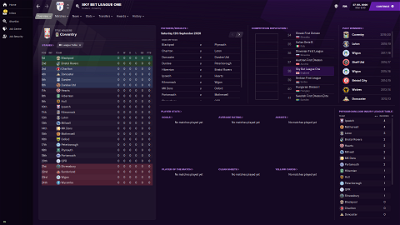 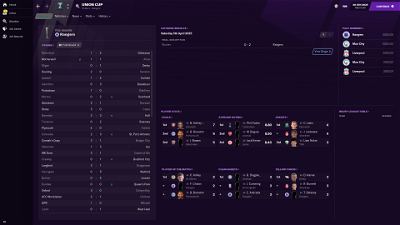 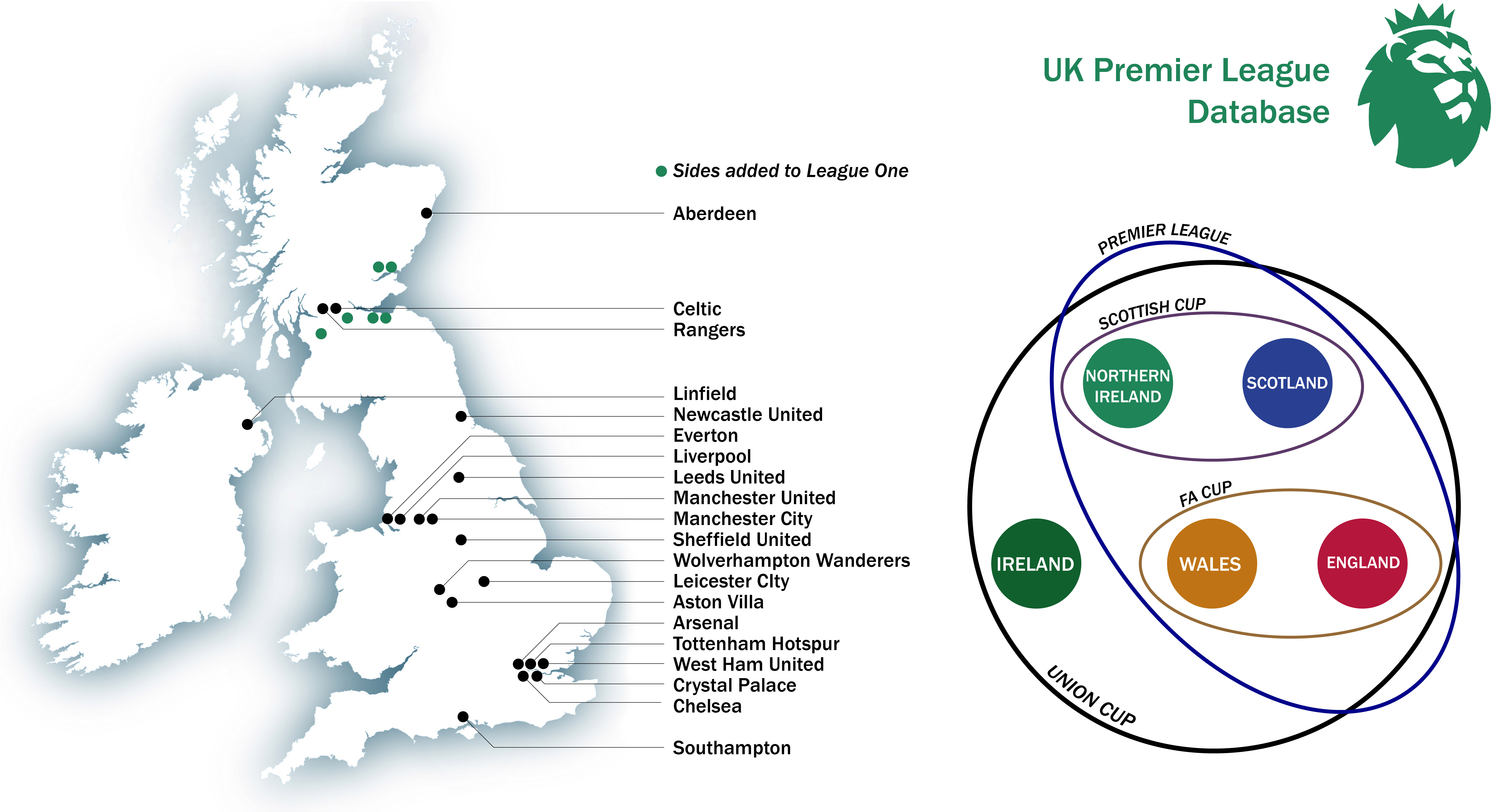 To use this database, I recommend simply loading the 'UNION' save game, but you could also load or edit the editor files yourself if you choose.

The primary change in this database is the addition of Rangers, Celtic, Aberdeen and Linfield to the Premier League, and Hearts, Hibs, Kilmarnock, Motherwell, Dundee and Dundee Utd to League 1. Other English sides have been reshuffled (relegated) to accommodate this*.

The top 6 in England all lose £50m which is then redistributed amongst the sides entering the English system, to compensate for the fact that their existing teams were built for a weaker competition. Reputations have also been adjusted for fairness, and I had to add a few players to the Linfield squad, otherwise they fail to score a single point in their first season. To be honest, I've messed around a bit with several teams and players to even things out. You may find that the usual wonderkids are no longer so, for example.

Wales, Scotland and NI all now have clubs in the English League system as well as domestic leagues of their own,  so a new international club competition has been created with clubs from across the British Isles given the chance to play one another. The full format is below**,  but essentially its a simple knockout tournament with Premier League teams entering in the third or fourth round depending on their League position at the time of the draw. The first round is regionalised with Irish and NI teams (including Linfield, if they're in the Championship or below) playing one another. The semi-finals are held in Glasgow and Dublin with the final in Cardiff. This provides smaller sides from the home nations the chance to play Premier League and Football League clubs.

This replaces the EFL Cup in England***, but each of the other nations keeps all of their domestic competitions in addition to this. In Scotland,  the clubs in the English League system (Celtic ect.) participate in the Scottish Cup, with the FA Cup only for English (and Welsh) clubs. This means some Championship and National League sides enter the FA Cup later than they otherwise would. Linfield also enter the Scottish Cup to even the numbers. The Betfred Cup remains for Scottish league clubs only but Celtic and Rangers will still participate in the first season. Teams still participate in their own nation's U18 system but the FA Youth Cup has been expanded to include teams from each of the home nations.

The SPFL Trust Trophy provides another opportunity for sides from across the British Isles to play one another, and finally a friendly tournament has been created for Linfield and the top NI clubs each year.
Finally, Linfield have a new logo and kits to help shed its sectarian reputation and become a club that can represent all of Belfast. Aberdeen, Dundee and Kilmarnock also have new kits as the existing ones don't offer enough variety when playing away.

Please let me know if there are any issues with this- I'll look to resolve as soon as I can.

*The 9 Scottish clubs were chosen based on their perceived reputations, their stadiums, and their rivalries with one another. English clubs were relegated based on a similar criteria, although I'll admit to cherry picking some clubs I particularly dislike (Ie. Salford and Fleetwood which have been bankrolled way beyond their natural level).

***The EFL Cup could easily be reinstated or changed to a different format, but I'm not sure what this would be.

Help needed: There is one key thing I have not been able to do with this, and I'd still like to if possible. Its a question I've seen asked plenty of times but I've never seen an answer.
How can I access the advanced rules of all European club competitions, so that I can change which teams qualify for the Champions League, Europa League, ect. ?

I am aware that by assigning the Champions League a nation you can edit the nation's rules and and see the advanced CL rules that way, but this doesn't include the qualification system which allocates CL and EL spaces to each country. Effectively I want to adjust the number of qualification spaces allocated to each coefficient position.

I'd also like to avoid remaking the full system from scratch.

My plan is to reassign Champions League spots from the Welsh, Scottish and NI premier to the English leagues. It doesn't seem fair that tiny TNS get a Champions League spot whilst two of the big six miss out each season. Instead, the smaller countries could receive additional Europa Conference spaces.

It doesn't seem fair that tiny TNS get a Champions League spot whilst two of the big six miss out each season.

I would like a Robin Hood set up...take from the entitled rich clubs and give to the tiny ones...balls to the big six😁

interesting concept and thanks for sharing

I would like a Robin Hood set up...take from the entitled rich clubs and give to the tiny ones...balls to the big six😁

Thanks for the reply!

I also hate the big 6 model, and want finances to be allocated more fairly. This database actually has a lot of smaller changes included that aim to do just that, TV and sponsorship income has been adjusted in England for example. However, on European spaces, I would rather large clubs like Leeds, Newcastle, Villa ect. were given a chance to play in Europe ahead of clubs like TNS that have average attendances of less than 1000 and would probably be in the sixth or seventh tier in England. With the best Welsh teams playing in England, shouldn't the Welsh UEFA representative be Cardiff, Swansea or even Wrexham?

In this database, the Scottish sides (Celtic, Rangers ect) play in the Scottish Cup but can't qualify for Europe this way. In the ideal world I'd like Welsh sides to play in the Welsh Cup, too, and the winners of these national cups awarded a Champions League space. However, I'd also want these sides to be able to qualify through the Premier league, and I think that's too complex for the game (or UEFA in real life) to handle.

It may be possible to load a game using these files and the UEFA Supercup editor file that someone posted here the other day, but I haven't tried it.

Generally, the big 6 are overpowered in FM. I bet you could run the first season 100 times and the big 6 would finish in the top 6 almost every time; Even more frustratingly, you'll find the same top 6 in 10 or 20 years time. This database should tackle that a bit and allow other sides to challenge for the title over time. Have you any advice on how to increase this volatility further? If you look at the Premier League table from 2010, four sides are now in League 1 and Bolton are in League 2, but in FM the table looks pretty much identical after 10 years.

Bielsa is a Legend

My plan is to reassign Champions League spots from the Welsh, Scottish and NI premier to the English leagues. It doesn't seem fair that tiny TNS get a Champions League spot whilst two of the big six miss out each season. Instead, the smaller countries could receive additional Europa Conference spaces.

Those nations only get those spots because they have their own leagues. It's why Wales had to create a national league in the 90s, because African nations threatened to boycott international competitions if the British 'nations' continued to get representation in UEFA and FIFA while African countries did not.

By removing those leagues, you are justified to just switch off their European qualification. I don't think you can then justify allocating them to English clubs who haven't done anything to earn it though.

"Union Cup" seems like a pretty poor name for the only competition involving clubs outside the 'union'.

Those nations only get those spots because they have their own leagues. It's why Wales had to create a national league in the 90s, because African nations threatened to boycott international competitions if the British 'nations' continued to get representation in UEFA and FIFA while African countries did not.

By removing those leagues, you are justified to just switch off their European qualification. I don't think you can then justify allocating them to English clubs who haven't done anything to earn it though.

Yeah, I had to explain this elsewhere; I'm aware that Ireland isn't in the UK but I just thought using language of unity might be better than language of division (us & them). 'Unity Cup' would have been a better name and I'll rename it in the next version of this. Nevertheless, I created a version with this competition renamed the 'British and Irish Cup' if you're interested:
https://www.mediafire.com/file/v1oj0m3b4vv0a3f/UK_Premier_League_%252B_BIC.zip/file

I suppose my view is Cardiff or Swansea should represent Wales in Europe, as the best team in Wales, rather than tiny TNS (who are based in Oswestry, England for a start). Welsh teams are welcome to join the English pyramid at any time but if they did that they'd never qualify for Europe again.

Doing this in practice is really difficult. Editing which teams qualify for the Champions League is impossible, apparently, as this is hardwired in. But the system can be recreated from scratch, albeit without coefficients factored in, so this is what I'll aim to do.

This is the direction UEFA is going in too. They'd much rather have Cardiff (or whoever finishes 6th in the PL, say) in the Champions League over TNS as they'd contribute more in gate and TV money, so I want to create a system which genuinely pits the best teams in Europe against each other, regardless of which nation they're based. Smaller tournaments like the Europa Conference can then be rebuilt to give clubs from smaller nations a genuine chance of success in Europe. To be continued...