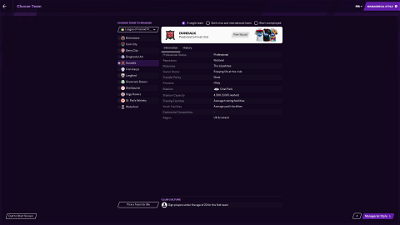 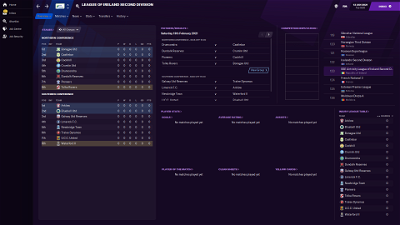 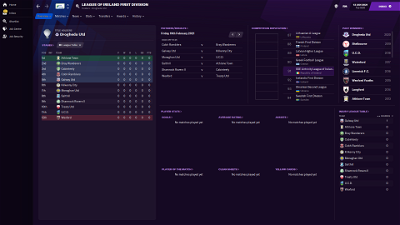 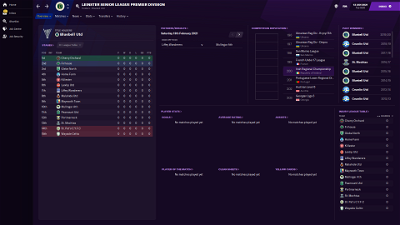 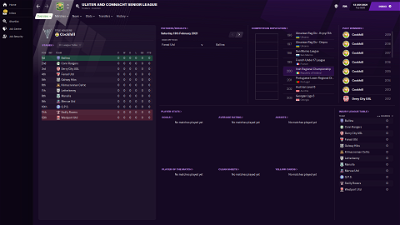 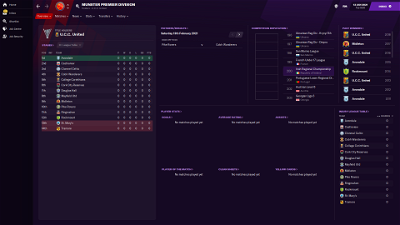 Ever wanted to take the likes of Cherry Orchard FC or Kilmacrennan Celtic from the amateur leagues to the Champions League? Then this is the database for you!

This database re-imagines the Irish football league system as a pyramid, with relegation to the provincial divisions, and makes thousands of other changes to competitions, clubs, stadiums and players.

Firstly, a new League of Ireland Second Division has been added. This is regionalised into a northern and southern conference, with a single promotion place offered via the playoffs between them. The bottoms sides in each also compete in a relegation playoff. Limiting the number of teams promoted and relegated keeps a level of stability in each division, and means that promoted teams usually do quite well the following season.

The Regional Senior Divisions have been adjusted and expanded. The three provincial winners play in a playoff for promotion to the League of Ireland. Leinster get an additional promotion playoff place as the largest province in the ROI and the largest senior league. 1-2 teams are relegated from the provincial Premier divisions.

Additional changes include the activation of the Intermediate Cup for lower-level teams and an adjustment of the FAI and League of Ireland Cups. A full list of changes follows:

- The League of Ireland First Division has been expanded to 12 teams with the addition of Kilkenny City and Monaghan Utd.
- Treaty United have been added to the League of Ireland First Division, as they have been in real life.
- The 'Treaty City Derby' between Limerick and Treaty United has been added.
- The new League of Ireland Second Division is regionalised north and south. The top two teams qualify for the Promotion Playoff and the bottom team from each region plays in a relegation playoff, with the loser relegated.
- Provincial senior leagues have been activated, with the winners of each division qualifying for a playoff for the single promotion spot. The top two in Leinster qualify as it's the largest province.

- The 'Ulster Senior league' has become the 'Ulster and Connaught Senior League' with relegation to/from the Galway Junior league, Connaught Junior League, Ulster Junior League and/or the Innisowen Junior League.
- B-teams can play as high as the Second Division, but specific rules apply to those sides, for example relating to the number of loanees and full-time players that can play.
- A maximum of four reserve sides can play in the Second Division, and reserve teams are denied promotion from the senior leagues once this is met.
- Shamrock Rovers II allowed to play in the First Division, but if relegated, they cannot be re-promoted.
- The FAI Intermediate Cup has been activated for teams in the Second Division and below.
- The FAI Cup has been adjusted slightly. Second Division and Provincial Senior league teams enter in the first round, First division teams enter in the second round and Premier division teams in the third round.
- The FAI Cup winner plays the League of Ireland PD winner each January for the Presidents Medal.
- Some changes made to the stadiums of lower-league Irish clubs, and minimum stadium requirements brought in to the League of Ireland.
- A new All-Ireland Youth tournament has been created between the top NI and ROI youth teams each year, played January-March. Each team plays six matches in an initial group stage, with the top six teams progressing to the final knockout stage.
- The Enda McGuill Academy Trophy is a new 64-team knockout tournament for youth teams from across the Republic of Ireland. Teams that make it to the Quarter finals automatically qualify to play in the following season's U19 National League.

- A new 'Celtic Nations Cup' brings together amateur, semi-pro and reserve teams from the six Celtic nations in a pre-season tournament each year.
- The existing and expansion capacity of several stadiums have been adjusted for realism.
- The graphics pack includes logos for each of the new tournaments.
- Custom/Fantasy 3D and Standard 2D kits have been created for all Irish clubs in Steps 2-5.
- As the kits need to correspond with the database colours, I've included Irish Step 1 kits by wfm18 and priority76 in this pack.
- Additional custom third kits have been added to some teams without enough variety in their default kits, such as Dundalk.

This is separate to the ‘UNITY CUP' database, and for the full experience I recommend downloading that. The two are similar, but the other includes ‘Dublin Morrigan', a Dublin-based Premier League side, and the Unity Cup itself which allows Irish sides to play competitive matches against team from across the British Isles.

Let me know if you have any questions or comments!

Brilliant, lookig forward to trying this

I try this database. Brilliant work

Not initially. You'll either have to wait for them to be promoted from the Galway Junior League to the playable Ulster/Connaught Senior League - or you could swap Athenry with a UCSL or League of Ireland side in the editor before beginning a save game.

Love that there is a kevin kilbane stadium in it 😂

Where did you download that logo pack for all the Irish Teams?