45 minutes ago
Cymro commented on: SS Official Kits Thread 53 minutes ago
A new version of our data update was released with 31198 changes from 124 contributors.

1 hour ago
Kykinson broke the record for FM2020 Highest Career Average Rating for Club with 7.88

3 hours ago
ovidiu10 commented on: Image finder thread - assistance in finding a source image 3 hours ago
A new version of our data update was released with 31143 changes from 123 contributors.

3 hours ago
rfreixo commented on: Facepacks Release thread - NO REQUESTS

3 hours ago
Waterdeep70 commented on: International Save..England to start with

4 hours ago
Waterdeep70 completed a season in their Football Manager career: International Save..England to start with

Hi all, desperately looking for some help with an issue that has completely thrown me. I have started a new save with Gateshead in the National League and I selected, as always, disable first transfer window. I didn't try and sign anybody for the first couple of months and then then I had two injuries to two GKs. I went out a signed a GK on loan from a National League side. I then made an offer to sign a striker (he was playing on a non-contract for another team). I changed my mind so withdrew the offer. Both of these happened about mid September.

A couple of weeks later I looked at signing another couple of players and for some reason every time I click on 'make an offer' or 'approach to sign' I get a message box saying Gateshead are unable to sign players during this transfer window. It wasn't an issue two weeks before! Any ideas what the hell is going on!? I haven't had a message regarding an embargo, etc, so like I said - I'm stumped! Any and all advice greatly appreciated.
danbeats71 30-04-18 - 13:47

Hi all. Can somebody point me in the direction of the Argentine premier league? If not do you know if they are in the works at all? Many thanks in advance.
danbeats71 07-11-17 - 22:24

Glad to know!
Could you post some screenshots in game? Just to see how they look...

Here bayern kits, for a start. Download the attachment and replace the kits if you already installed a kitpack.
If not, you will find a config file for bayern kits inside the rar archive.
Rest of Bundesliga will follow.

Here a preview of the kits: 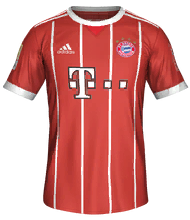 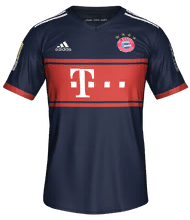 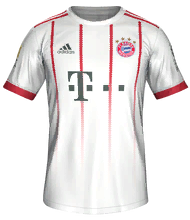 Just loaded the Bayern kits in to the game and they look stunning! Very very similar to the FM kits and the resolution looks fine as well. Can't wait to see what the rest look like!!
danbeats71 07-11-17 - 18:50

So that you are the first "customer", I will start from 1.Bundesliga. Hope to release the pack really soon!

Mine intention is to release kit packs for unlicensed FM leagues first. So priority goes to:
- EPL
- Liga Santander & Liga 123
- 1. and 2. Bundesliga, 3. Liga

Bear in mind that some third kits will be missing due to the fact that EA didn't include some of them in its game.

Hi guys!
I have all FIFA 18 default minikits in dds format. I was thinking to convert them in png and create some league packs.
I already tried to convert some of them.

Here Juventus kit set which I converted from FIFA 18: 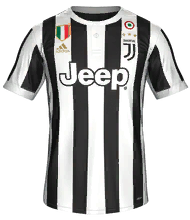 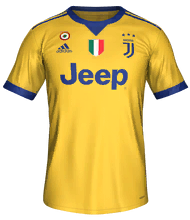 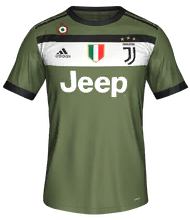 The style is very similar to the new FM 18 one. Unfortunately the maximum resolution that I manage to reach is 190x220. The default EA minikits are 256x256, but the image is centered and there is too much unnecessary space.
So the only problem with this style is the resolution, lower than other kit styles (SS, FB, FC'12 and probably FM default one), but I don't think upscaling will be a solution.
Anyway guys, what do you think? This style worth a league packs project?

I think this would be perfect for the new FM. I've been desperately searching for kits similar to the new style and this looks the closest yet. Go for it!
danbeats71 02-08-17 - 22:32

Anybody know if there is a Bundesliga pack knocking about? I was able to scrounge together about 10 teams worth of La Liga just by trawling through the forums but couldn't see many German kits. Can't bring myself to use another style instead, I've only ever used standard!
danbeats71 04-11-16 - 12:08

Does anybody know how to change a team's nickname using the in game editor? I've not been able to do it in the past and was wondering if this year was any different. I've got a save as Valencia and they're known in game as 'Los Ches' despite the fact their nickname is 'Los Che' - only minor I know but I'm picky like that!

Sorry to be cheeky in asking again, but any chance anybody could do Notts Forest's new home and away kits please?!

Thanks again in advance! Any chance anybody could do QPRs new home, away and third kits please? Thanks in advance! Poland home and away kits.

Here it is (UPDATED) Thanks for the template. Had a go at the England kits - never made a kit before so let me know what you think! Any chance anybody could do the new Nike (e.g. England and France) and adidas (e.g. Spain and Germany) templates please? I'd love to have a go at making them but would be hopeless at creating the actual templates!
danbeats71 15-06-16 - 15:50

If anybody could do these I'd be very grateful!! Thank you in advance.

France Home and Away
https://www.google.co.uk/search?q=france+new+kit&oq=france+new+kit&aqs=chrome..69i57.3627j0j4&client=tablet-android-pega&sourceid=chrome-mobile&ie=UTF-8#imgrc=PXr4yNQVUYtBLM%3A

Spain Home and Away
https://www.google.co.uk/search?q=spain+new+kit&client=tablet-android-pega&prmd=insv&source=lnms&tbm=isch&sa=X&ved=0ahUKEwjHxuqBoqrNAhXmJMAKHTupB14Q_AUIBygB#imgrc=cgXZU6R40rXcmM%3A

Germany Home and Away
https://www.google.co.uk/search?q=germany+new+kit&client=tablet-android-pega&prmd=insv&source=lnms&tbm=isch&sa=X&ved=0ahUKEwjwy6nfoarNAhVnKMAKHcJhDk0Q_AUIBygB&biw=960&bih=600#imgrc=wYeL8uU_QvPsuM%3A

Italy Home and Away
https://www.google.co.uk/search?q=italy+new+kit&client=tablet-android-pega&prmd=insv&source=lnms&tbm=isch&sa=X&ved=0ahUKEwjqkIHHo6rNAhWhB8AKHaffA6QQ_AUIBygB&biw=600&bih=960&dpr=2#imgrc=lzxKcZ72qgDouM%3A

Hi. Any ideas on whether the template pack will be updated for new kit designs like the England/France Nike kits, or the Germany/Spain Adidas kits they are wearing at the Euros? I'd quite like to have a go at creating a few but it seems the template pack hasn't been touched in a while!
danbeats71 30-12-15 - 17:29

Hi guys. Any chance somebody could have a go at these Blyth Spartans kits please? Thanks in advance.

Hi guys, slightly random but has anybody got an English premier League Kitpack for either FM 05, 06 and/or 07? I was getting all nostalgic watching Premier League Years so fancied firing up some old school Football Manager! Thanks in advance.
danbeats71 29-07-15 - 22:32

Know that this ain't publish or release here, I just grabbed a link and give it to you guys.

put it into "editor data" folder just like SSKCC, and start a new game.

Top job, thanks very much!!

Do you know if there is a kit pack in the standard style knocking about? The SS style looks nice but all my other leagues are standard style so in the interest of consistency it'd be good to keep them the same!

Can somebody point me in the direction of kits/logos etc. for the Chinese Super League - had a hard look around but couldn't see much, which surprised me.

Can somebody point me in the direction of kits/logos etc. for the Chinese Super League - had a hard look around but couldn't see much, which surprised me.

Can anybody tell me if it is possible to edit players career history using FMRTE (i.e. appearances and goals, etc.).

I only ask because I've started a season with New York City FC in the MLS and they don't join the MLS until 2015 (as in real life). So I've simmed the 2014 season but despite the fact that I haven't played any games with them at all, my players have still racked up appearances, goals and ratings for some reason and I want to reset their stats to zero. If anybody could also shed light on why that is that would be a bonus!

Any chance for NY Red Bulls new home kit? Thanks in advance!

Hi, could somebody please have a go at creating the new Portland Timbers home shirt please? Thanks in advance!

Hi guys, just wondering if anybody was planning on doing new MLS kits? Think most of this seasons have been released as of this weekend. Thanks!
danbeats71 01-03-15 - 09:20

Just wondering if you could help me out? I've started a career with New York City FC in the MLS and it's bloody difficult! I've built a fairly decent team through drafts and trades (decent according to assistant reports anyway) and through pre season we won 2, drew 2 and lost 2.

Going in to the season, fitness was good but understanding of tactics was "awkward" still. Anyway I've played the first 5 games of the season, using a couple of tactics and tinkered line ups, and I've LOST ALL 5 GAMES!!

Anyway my question is - will it get any better?! I'm a reasonably experienced FM player, but I've never done one like this (i.e. with a completely new team). I'm hoping it's just that my team still have very poor understanding of one another because all of the players are new with NYCFC being an expansion team and all (they struggle with basic passing/defending in games for crying out loud!)

Any advice or reassurance would be greatly appreciated! I've put a heck of a lot of work in to building this team so really want to turn it around! Thanks in advance.

Hi guys. Could somebody please do Vitesse Arnhem.s new kits for this season?

Thanks in advance!
Attachments