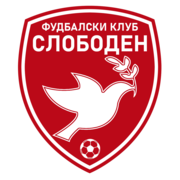 So a few days ago I was making changes to my Macedonian database, and as I was searching I had found a "team" called Sloboden in the youth leagues, but that "team" didn't have any info out in the public eye. So I contacted my links in Macedonian football and even they were surprised by this "mystery team". Turned out in the end that Sloboden was used to mean "bye" as there were only 11 teams in the division.

This seems fine up till now, but then I posted the chat out on the internet as it was stupidly funny and "why not". This lead to this small team going from "just a joke" to BEING ACTUAL NEWS. SERIOUSLY, I'm still shocked as I'm writing this.

So I decided as a joke, I'd add FK Sloboden in the database and try to fight with them to the top of the football chain, starting from the 5th tier (the lowest known level in Macedonia).

So ladies and gentlemen, please join me, as I take a joke that went too far to years of success.

PS: Cause this team doesn't exist, I've marked the career as Mlekar and starting in the lower leagues cause I'll be using a database to add my leagues.