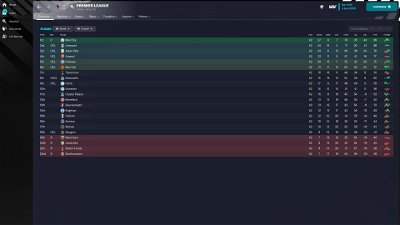 Celtic and Rangers join the English football system. This will offer these teams better competition and will also make managing these teams a lot more interesting.

There are two files included which you can can only pick one from:

[list]
[li]Option A: Celtic and Rangers join the English pyramid and completely step out of the Scottish football. Reserves teams of these sides will fill in their spot. European qualification will go via the English system (like Swansea and Cardiff). Instead of almost guaranteed European football each season you will really need to fight for a spot.[/li]
[li][/li]
[li]Option B: Celtic and Rangers join the English pyramid while also remaining in the Scottish league system. European qualification will go via the Scottish system. They will be 'guest' teams in the pyramid (like FC Vaduz in Switzerland for example). This option will mean a really full calendar. You will most likely need to rotate a lot more than you're used to.[/li]
[/list]

Both these options have their own pro's, cons and challenges. Just pick the one that you think will suit you the best (or go out of that comfort zone and set a real challenge).

Two other optional files are included are as follows:

[list]
[li]Empty squads: speaks for itself. This file terminates all current player contracts of the teams. Choose this file if you want to make a fresh start.[/li]
[li][/li]
[li]Financial boost: This file gives the teams a financial boost to make the transition a bit easier. Both teams get £100,000,000 (£75,000,000 transfer budget) and a raised reputation level to near that of the top-6. Some might find this file cheating, but it's your party 😉[/li]
[/list]

Things to keep in mind:
The Premier League will now consist out of 22 teams instead of 20. This means 4 more games each season.
The amount of relegation spots have been increased to 4 instead of 3 with increased EFL Championship play-offs.
The Editor and game have only been out for one day, so some bugs could occur. I have tested the files, but if you encounter any bugs. Please let me know them so that I can fix them.

Lastly, I have made a donation page where people can donate to me if they like to. Don't feel obliged in any way. I purely/solely make these databases for fun and making them gives me a lot of joy 🙂. If you want to donate and if you can really miss it, feel free to do so 🙂