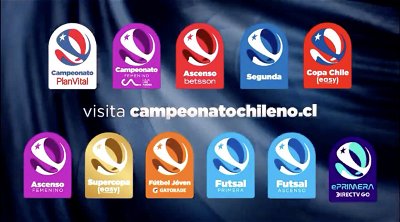 Sorry for my English. I used google translate.

RECOMMENDATION BEFORE STARTING THE GAME:
-ACTIVATE THE OPTION TO FILL WITH PLAYERS THE TEAMS THAT DO NOT HAVE (ANFA), THIS ALLOWS YOU TO HAVE A BASE OF PLAYERS IF YOU WANT TO START THE GAME
WITH A TEAM FROM THE ANFA.
-CHECK IF YOU HAVE ANY OTHER PATCH THAT ADDED PLAYERS, CLUBS, ETC. BECAUSE IT WILL CHANGE THE IDs OF THE PLAYERS CREATED IN THIS PATCH AND THE FACES, STADIUMS, AND LOGOS WILL BE UNSQUARED.

Created more than 1000 players for Tercera A and Tercera B.

Added more than 700 Faces for Third A and B players.

Media and journalists for specific leagues and clubs.

Betsson Ascent:
-16 Teams
-2 wheels
-All against all
-1st is Champion and is promoted directly to AFP PlanVital
-2nd classifies to the Playoff semifinal
-3rd to 8th qualify for the Playoff
-16th descends directly to Second Group TX
-Playoff round-trip cup format, the winner qualifies for the semifinal against the 2nd overall, the winners play the final for promotion.

Second TX Group:
-14 Teams
-2 wheels
-All against all
-1st is Champion and ascends directly to Ascenso Betsson
-13th and 14th descend directly to Third A

Third B:
-36 teams in total
-3 groups of 12 teams grouped by geographical condition (North, Center and South)
-Each group plays 2 wheels, all against all
-1st and 2nd classify to Second round
-11th and 12th descend to ANFA
-Second round league format, 6 teams, 2 wheels, all against all, the 1st and 2nd are promoted to Third A, 3rd to 6th qualify for the Playoff
-Playoff cup format, round trip, the 2 key winners are promoted to Third A

ANFA:
-69 teams in total
-6 groups of 13 and 14 teams each grouped by geographical condition (North, North Center, Center, South Center, South and South Austral)
-Each group plays 2 wheels, all against all
-1st is Champion and is promoted to Third B

Chilean Cup:
-62 Teams in total, 16 AFP PlanVital, 17 Ascent Betsson, 14 Second Pullman-Bus, 8 Third A, 3 Third B and 5 ANFA
-Teams from Third A and below are randomly invited each year
-Winner classifies Libertadores as Chile 4 and Super Cup

Super Cup:
-2 Teams, AFP PlanVital Champion and Copa Chile Champion
-If the Champion is the same in the 2 competitions, I would play it with the runner-up of Copa Chile

ANFA Amateur Champions Cup:
-63 teams in total, all ANFA teams
-Back and forth keys to the end

ANFA Rookies Tournament:
Championship created from the Under 21 Projection format but is played by the Under 18 teams of Third A and Third B.

In addition, there are several details added and corrected, such as:
-Realistic schedule
-Transfer periods with the correct windows
-TV
-Money for TV
-Money for prizes
-Budget of transfers corrected to the annual calendar
-Rule of minutes sub 21 without bug
-Dates where matches are not played (September 18)

Some Known Bugs:
-In Third A and Third B on January 1 they ask you to send a template to register, this has nothing to do with the actual date of registration of the template, which is the day before
to the first date, however after that squad registration date you can continue registering free players with a maximum limit of 30 players in the squad.
If for any reason you do not meet the registration requirements on January 1st, the game will not let you advance by day. To solve this problem you have to go on vacation for 1 day.