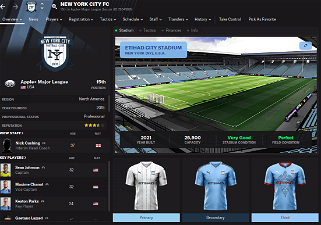 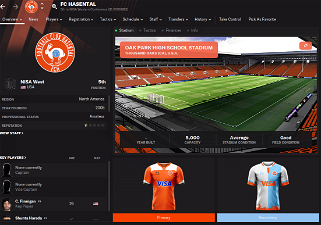 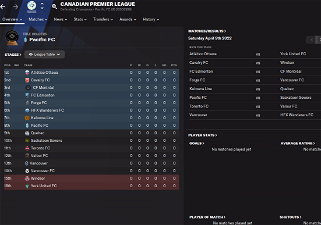 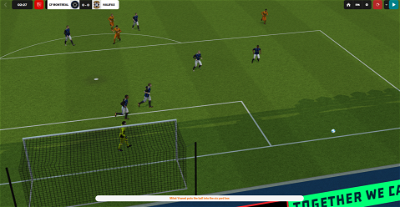 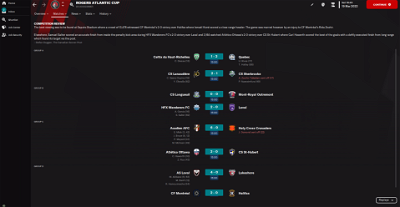 **Last year I created a ten tier US Pyramid and a two tier Canadian one, as well as some new continental competitions. I was hoping to roll the file over quickly and easily for FM 23, but alas there seems to be an error in the editor that isn't allowing me to do the stuff in advanced mode that I would hope, and the continental competition crashes to desktop even in basic mode. As of now, the Canadian and USA databases seem to be stable together (despite the empty discipline rule warning when you load the game) - I simmed both of these files fifteen years into the future a few times, and they seem stable. So, I'm going to release an in process version for people that are looking for a US or Canadian database (along with kits and crests for all the clubs), and will update the files as the bugs are fixed in the PreGame editor**

About a decade ago, the user Raysox created a three tier US pyramid complete with crests and kits for 72 teams. He released  an FM mod for the set, which is how I got into the game, and ever since I've updated and expanded it for new versions. It's grown a bit from his original vision (now ten tiers and 384 teams in the US and four tiers and 80 teams in Canada), but explores what it would look like if the US and Canada had functional soccer pyramids.

A few notes on the two set-ups

- The US has four professional leagues (Apple+ MLS, Prime Championship, Peacock League One, and Paramount+ League Two), three semipro leagues (reconstituted USL Championship, 1, and 2), and three amateur leagues (NISA, UPSL, and NPSL.) The lower five leagues are split into regional divisions, while the top five are national in nature. There is a good amount of TV money throughout the Pyramid, because that is how TV rights for US Sports work (our amateur sports often have $300-$400 million dollar a year TV contracts, so...). It is also on a winter schedule, beginning in August and running through May.

- There is one national Cup, three cups based on league type (named for major figures in US Soccer history), and twelve regional cups that take place in the winter months.

- All teams in USL1 and above have reserve teams, and all teams have a U19 squad. The teams are split into regional youth and reserve competitions.

- Once advanced mode is available, there will be numerous changes, including the immersive deadline day, changes in the schedule to address the fixture congestion, VAR (we love our replay), FFP Rules (we love our owners making massive profits, or, more realistically, our billionaires love making massive profits and we are powerless to stop them), roster rules, and changes in the playoff structure.

- The Canadian Set-up has two professional leagues (The CPL and the Canadian Soccer League), one semi-pro league (CSL 2nd Division), and one amateur league (CSL 3rd Division.) The lower two levels are split into regional divisions. There is also TV money, but not nearly as much as the US. The season runs from April to October.

- There is one national cup and four regional preseason cups.

- All teams in the top two tiers have a reserve and a U18 team, split up according to the preseason cups.

- Like the US database, when advanced rules are editable there will be numerous changes to make the file more realistic.

There is also a competition between the top tier teams in Mexico, the US, and Canada in August and September, mimicking the newly expanded Leagues Cup of MLS and Liga MX.

I also put together badge and kit packs for both of these databases, to help raise the realism of the files. You can find the zip files for each below:

The ZipFiles have the kitbasher files for the teams and sponsors in each country, so you can easily update the kits as you advance through the save. Hopefully this is the first of several versions during this release cycle. Thanks all!

Reserved for Continental Competition and other CONCACAF nations (when applicable)

Reserved for other future info

Awesome glad its back for FM23! Any estimation on when the advanced edits will be made and posted?

Awesome glad its back for FM23! Any estimation on when the advanced edits will be made and posted?

It depends on when the editor gets fixed. Once the bug has been resolved I'll get to work on it. My hope is that it'll be done 1-2 weeks after we can edit us databases.