Football Manager 2018 will be released on November 10th.

They say football is a game of opinions and everyone has theirs, but it’s only yours that counts around here.

You make the decisions now, from who you sign and who you sell, to how you manage your budget. Will you build tactics around the players at your disposal or train them in your vision of how the game should be played? Who you pick and who you bench will affect squad harmony, and it’s up to you to manage it. Every decision comes back to you.

Get it right and you’ll be the star of the show, grabbing the newspaper headlines and dominating trends on social media. They’ll write your name in footballing folklore…if you succeed, of course.

With unparalleled choices both on and off the pitch, all within the immersive footballing world, it’s time to decide what kind of manager do you want to be?

Try your hand in 50 of the biggest footballing countries
Win the title with any one of world’s top 2500 clubs
Play the transfer market with over 600,000 real players and staff
Watch your football vision come to life before your very eyes

In addition, you’ll also enjoy access to a fully-playable Beta version of the game at least two weeks prior to the November 10th official release date, allowing you to start pre-season early. Single player careers started in this Beta version will also continue into the full game. 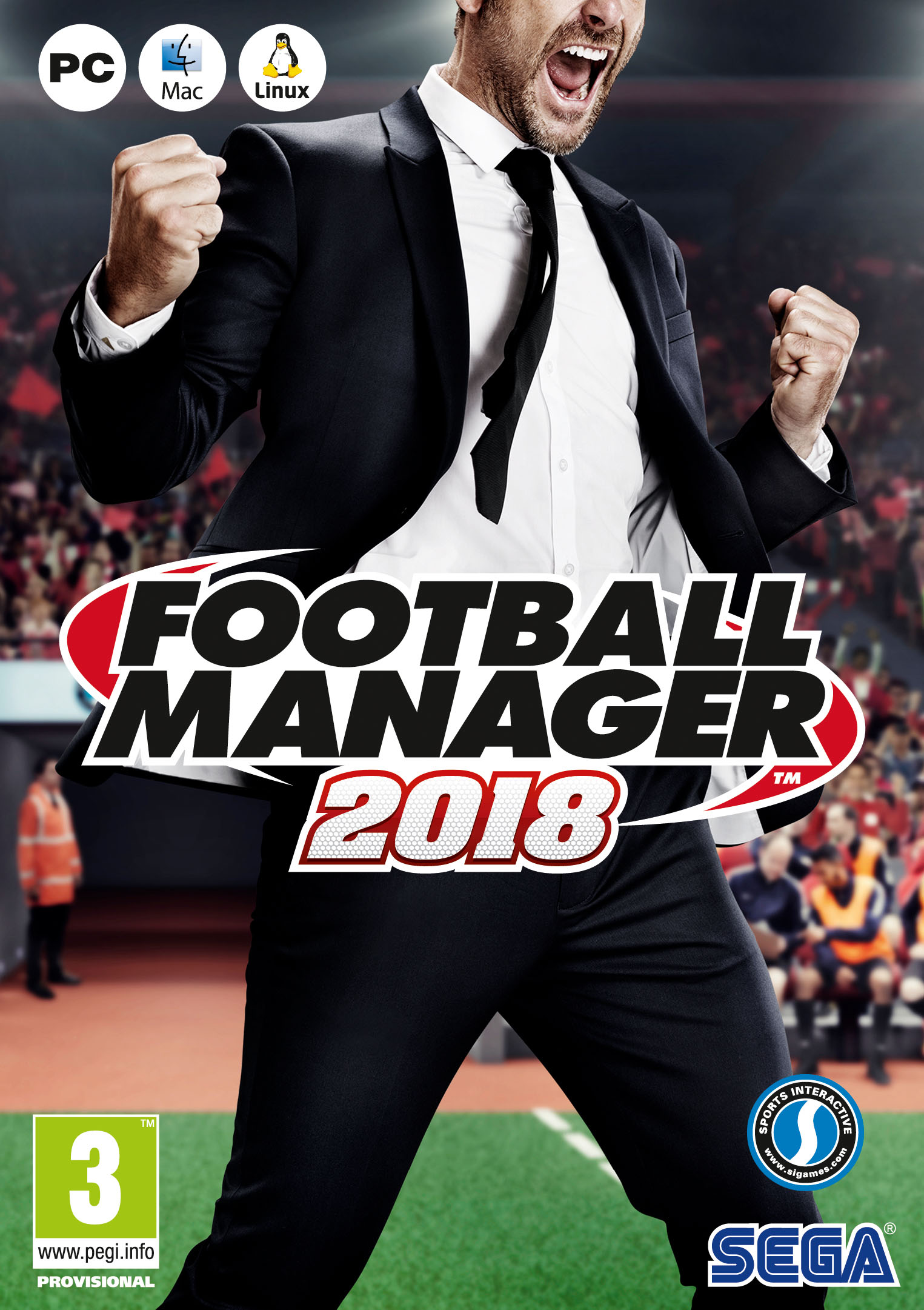 When is Football Manager 2018 going to be released?

The sortitoutsi real names fix changes the instances of fake names in Football Manager 18 to the proper, real life names for awards, cities, stadiums and competitions, in cases where the actual name is not licensed. It will also fix the fact that the German National team doesn't call up real players. These license updates are fully save-game compatible.

Football Manager Backgrounds are big graphic pictures that appear in the game as you're browsing showing stadiums or other relevant photos. Our awesome stadium backgrounds megapack is based on aerial shots from Google Maps and Google Earth, check it out!

Want to prove that you're the best at Football Manager? Or just want a new challenge to help you get back into it. Our challenges and scenarios are a great way to show off your skills in short little careers that other people are playing at the same time!

Annoyed when brexit happens and you have to start requesting work permits for European players? Our FM18 No Brexit add on will prevent brexit from happening in Football Manager 2018.

In Football Manager 2018 you’ll see a graphical representation of the biggest spending clubs and leagues during the transfer window.

Unsurprisingly the social feed has been improved in Football Manager 2018, with more context given to posts such as fans having a say when a player moves to a rival.

Reject and accept all offers from the inbox

What you can do from the inbox has improved alot in recent years and FM2018 is no different, with small changes such as accepting or rejecting all offers direct from a news item

Football Manager 2018 will include new squad dynamics where you can see team your teams hierarchy, including who the team leaders are and most influential players. This will an effect on the harmony within the squad, particularly as players come and go.

Football Manager 2018 will include social groups for the first time. This will let you see the social groups within your squad and who isn't integrated into the squad properly. Thinking of selling a player? Better make sure you're not going to upset his friends first.

Match analysis in the tactics screen

Football Manager 2018 is going to have a new medical centre facility. This will give you an overview both of who is injured as well as the general health of your squad, in particular, who is at risk of being injured due to their general condition

Within FM18's new medical centre you can view the injury history for your squad. Get stats on what time of year injuries are happening, how you compare to the rest of the league and which players have been injured the most.

Scouting has been improved in FM18 with the data analyst staff role now more important. When you get a scout report you can get the analyst to give a more in depth report on the player

FM18 brings more realism to your scouting, with the option to buy player data packages from big companies (real life teams do this). Giving you detailed stats on players from all over the world.

The transfer centre has been improved in Football Manager 2018. Players will now be organised by position and you can quickly see the role they play at a glance. Really useful if you're bidding for alot of unknown players and can't remember who's who!

In FM2018 you'll get regular news items in your inbox updating you on your squads dynamics including dressing room atmosphere, the players support for the manager, the squad hierarchy and the social groups within your squad.

There is now a dedicated Dynamics section in the sidebar. Clicking on it will give you an in depth break down of the dynamics of your squad, including match cohesion, dressing room atmosphere, the players support for the manager, any issues players in your squad might be having, the most influential players in your squad and your squads social groups.

Match Cohesion relates to the understanding of the players on the pitch. A good level of understanding means your squad benefits from an improvement in their collective mental attribute rating. For instance, a more cohesive squad may receive an in game boost to their vision attribute meaning they’re more capable of producing those great defence splitting passes for your strikers.

You can click on any player in the hierarchy pyramid to see a more detailed breakdown of their squad status, personality and happiness as well as an explanation of why they’re in the position they’re in. This may give some indication of whether a player is likely to move up or down in the hierarchy.

In FM2018 social groups massively expand upon the relationship system from previous Football Managers. It’s now more important than ever to consider the bonds formed between players when dealing with your squad.

In Football Manager 2018 there's is a new happiness screen, where you can see a player by player breakdown of each players happiness split into different sections: promises, morale, training, treatment, club, management and playing time.

In FM2018 each player now has a dedicated dynamics page, which includes elements from previous games, such as their long term plans, favoured personnel and general positives and negatives, as well as the new squad hierarchy and social group features as well.

FM18 has a new scouting centre where you can manage every aspect of scouting. Including a new scouting inbox, so scout reports don't clog up your normal inbox.

FM2018 introduces scouting focus, which is a great way to give yourself control over your club's scouting operations without having to assign individual scouts. There are two types of Scouting Focus – general and short-term. A general focus gives your scouts an idea of the type of player you want to sign without having to go into detailed specifications. Your scouts will then go and search for suitable players over an indefinite timeline with their recommendations for stars appearing in the Scouting Centre. The short-term focus option is perfect for use around transfer windows, or when you need to quickly identify a transfer target. In this case, your scouts will pause all other scouting activity to attend matches and draw up a list of potential signings.

Data Analysts have a bigger role

Data Analysts will play a much more important role in FM2018 with new Data Analyst reports giving a completely different perspective to that of your Scouts. Unlike a Scout who looks at a player more generally a Data Analyst will give you a report based on a players stats such as tackles made, passes completed, distance covered etc.

The next opposition scout report has had a revamp in FM2018 now featuring the roles each players will likely be playing in.

FM18 features a new tactics screen with two panels split between your players and your tactics where it's even easier setup your team for the forthcoming match. You can minify the tactics panel to get a better view of your squad, but all the same controls are still there even in the minified view.

FM2018 features pre match briefings, you can tell your squad the areas you'd like them to have the most focus on during the next match and you can even get reactions from the squad on whether they agree or disagree with your approach

The tactics screen in Football Manager will now highlight the areas that your team is vulnerable in red and orange.

The Segundo Volante is a new player role appearing in Football Manager 2018. The Segundo Volante is different from a Deep-Lying Playmaker in that their role is primarily a defensive one best suited to being paired with an Anchor Man, and is also different from the Ball-Winning Midfielder, in that they often run with the ball, or arrive with a late run, into the opposition area in much the same way a Box-to-Box Central Midfielder does.

The Carrilero is a new player role appearing in Football Manager 2018. The Carrilero, or "Shuttler", is a supporting role more often than not utilised as part of a midfield three, or as two central midfielders in a diamond midfield. It is the job of these shuttlers to cover lateral areas of the pitch and link the defensive midfield area with the attacking midfield area. This is what separates the Carrileros from a Box-To-Box Midfielder, as they are not expected to shuttle between boxes, but merely between lines of the midfield.

The Mezzala is a new player role appearing in Football Manager 2018. A Mezzala is similar to a Box-To-Box Midfielder but with less defensive responsibility, the Mezzala gets into attacking positions that an Inside Forward would usually be found in.

Football Manager 2018 introduces a new "Medical Centre". A one stop shop for everything related to the fitness of your squad, including an overview of players who may not be injured, but are at RISK of being injured. So you can manage their fitness in order to avoid a possible injury.

In FM2018 you can go to your Medical Centre to get an assessment from your sports scientist.

The injuries panel in your FM2018 Medical Centre will detail every injury your squad has picked up over the season including a comparison of your injuries compared to the rest of the league as well as a year on year comparison.

In FM2018 you can now get a more detailed fitness report on each player including their injury history, a risk assessment of potential future injuries and their current physical status

In the FM2018 Medical Centre you can get a season summary, which gives a break down of each individual players injuries and how much of the season they've missed.

In FM2018 you'll get more detailed injury updates in your inbox