Feed
Football Manager 2020 is available to Play Now! Buy now, play instantly. Get these essential add ons to enhance Football Manager 2020 Want updated squads for FM20? We have the worlds biggest FM2020 Data Update. 4 hours ago
A new version of our data update was released with 91405 changes from 363 contributors.

6 hours ago
tongey commented on: Lets go on a European journey, man! 7 hours ago
A new version of our data update was released with 91338 changes from 362 contributors.

8 hours ago
julkjulk commented on: Facepacks Release thread - NO REQUESTS

8 hours ago
Ben Getty commented on: Please help- trouble getting any skins, logos etc to work

9 hours ago
anthony.duggan commented on: SS Fantasy Kits ONLY Thread (NO REAL KITS)

9 hours ago
hammer9 commented on: SS Official Kits Thread 9 hours ago
A new version of our data update was released with 91316 changes from 362 contributors.

10 hours ago
geordie1981 commented on: Facepacks Release thread - NO REQUESTS

11 hours ago
liverpool8 commented on: F.C. Valdelavilla (English Club in the Spanish Pyramid) 11 hours ago
A new version of our data update was released with 91270 changes from 362 contributors.

11 hours ago
Dan commented on: Lets go on a European journey, man!

12 hours ago
vinny68 completed a season in their Football Manager career: Vinny Stevens 12 hours ago
A new version of our data update was released with 91073 changes from 362 contributors.
sortitoutsi
FM2020 ($55.51)

@Ron Wandle, I can see what you mean. But it'll be something "wrong" from SI, rather than an actual licensing issue - so it wouldn't be something for this file

Yep, the mistake looks to be by SI, not with this file.

Can you give me a couple of examples so I can check please? I don't think the issue it'll be at my end tbh...

I think I've worked out what's going on.

The twenty teams in Campeonato Brasileiro Série C are divided into two regional leagues of ten teams each, Group A and Group B. The game accurately has all twenty of these real life Série C teams, but does not put them in the correct real life groups - the game places three Group A teams in Group B, and vice versa.

The Wikipedia page on the 2019 Campeonato Brasileiro Série C has a helpful map of where the competing teams are located. I have highlighted the two regional leagues in the maps below, with Group A in red, and Group B in green. The map on the left shows the real life distribution of clubs, while the map on the right shows the distribution of clubs as appearing in the game. 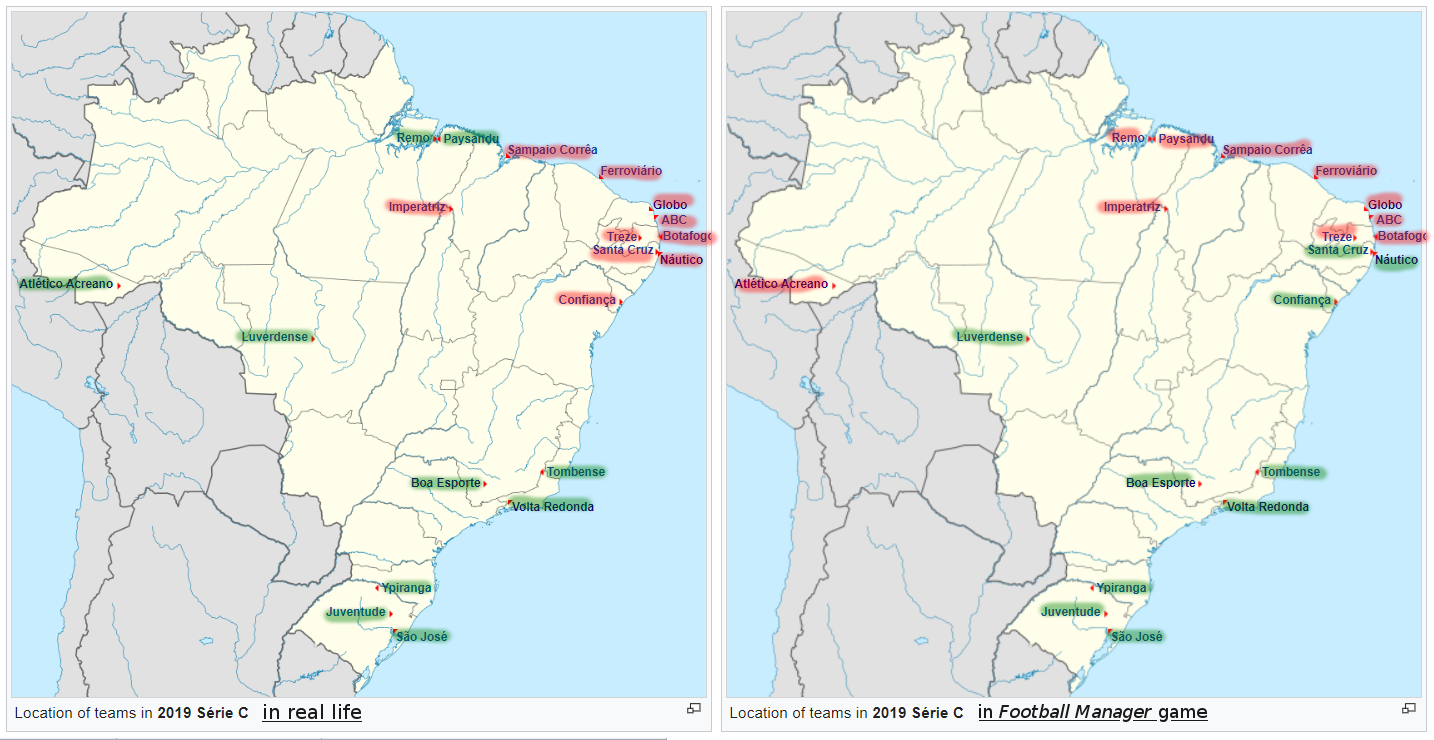 It can be seen that, in real life, Group A encompasses the north-east of Brazil, with Group B encompassing the rest of the country, while, in the game, the division is on a more North-South basis.

Can you give me a couple of examples so I can check please? I don't think the issue it'll be at my end tbh...

These are the clubs in 2019 Campeonato Brasileiro Série C, Group B, in the game:

Looking in the lowest Brazilian league, the Campeonato Brasileiro Série C, the teams featured are those from the 2018 season (14 April to 22 September 2018), not the 2019 season in which FM 2020 starts.

What's going on here? Is this Sports Interactive not updating the current teams, or the Licensing and Real Name Fix applying the wrong names to them?
Ron Wandle 11-12-19 - 20:02

If you have already started a save-game or you are playing FMT or you are playing the beta and wish to change German, Spanish, Italian and French club names to the correct ones, there is a workaround. However, you will lose the club nicknames.

Open the City, Club and Stadium Names.lnc file with Notepad (on Windows) and TextEdit (on Mac). All the changes I've made in the editor data file are included in this file, however they are preceded by a hashtag (#) which makes the lnc file ignore any text following it.

You can remove the hashtags from in front of any of the "CLUB_LONG_NAME_CHANGE" and "CLUB_SHORT_NAME_CHANGE" codes which you wish to change, and this will ensure these changes are displayed in your save game.

For Notepad, all you need to do is: Select the edit menu, click the replace option, type #"CLUB in the first field and "CLUB in the second and clicking replace all. Then save and close. Shouldn't take more than 3 seconds if you do it right 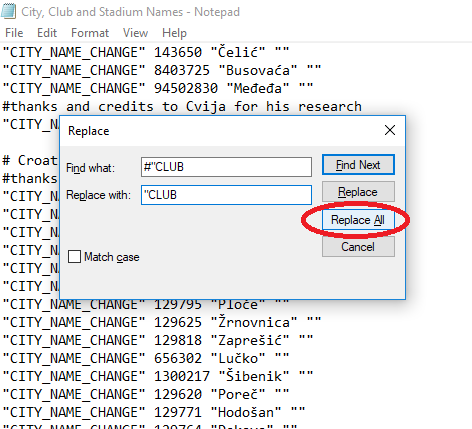 
Basically:
Using an lnc
Pro: Can be used (and disabled) after a save game has been started
Con: Removes club nicknames for those teams whose name has been edited