1 hour ago
tongey commented on: Lets go on a European journey, man! 1 hour ago
A new version of our data update was released with 91338 changes from 362 contributors.

2 hours ago
julkjulk commented on: Facepacks Release thread - NO REQUESTS

2 hours ago
Ben Getty commented on: Please help- trouble getting any skins, logos etc to work

3 hours ago
anthony.duggan commented on: SS Fantasy Kits ONLY Thread (NO REAL KITS)

3 hours ago
hammer9 commented on: SS Official Kits Thread 4 hours ago
A new version of our data update was released with 91316 changes from 362 contributors.

4 hours ago
geordie1981 commented on: Facepacks Release thread - NO REQUESTS

5 hours ago
liverpool8 commented on: F.C. Valdelavilla (English Club in the Spanish Pyramid) 5 hours ago
A new version of our data update was released with 91270 changes from 362 contributors.

5 hours ago
Dan commented on: Lets go on a European journey, man!

6 hours ago
vinny68 completed a season in their Football Manager career: Vinny Stevens 6 hours ago
A new version of our data update was released with 91073 changes from 362 contributors.

Staying overnight in Ely ahead of my mums graduation ceremony at the cathedral tomorrow. We went into a pub overlooking the new Bedford river and had to wait almost an hour for food, when we asked why we was told the place isn't normally this busy...there was literally ten people in whole place.

As I said earlier in this thread, I'd be happy enough with mid-table this season whilst we rebuild the squad under RDM and hopefully kick on in 2017/18. The current squad has a few decent players such as Ayew, Adama and Grealish who could tear up most Championship defences if given the freedom to do so (and if they stay of course), it's the defence and central midfield that needs a complete revamp.
Rick87 02-06-16 - 20:28

After six months of coaching the Aurora youth team I was given the reigns of the first team following Jorge Habberger's decision to return to his native Argentina. My task will be to get Aurora promoted back to the top flight and build a side capable of returning the club to the levels we were at in 2008 when we won the title.

Short Term:
*Get Aurora promoted back to Liga Nacional A.

My name is Juan Carlos Cardoso, I was born to crop farming parents in the small village of Torotoro in the Charcas province of central Bolivia. The mountainous terrain and weather conditions meant that our village was only accessible during the summer months and in milder spring and autumn seasons as the torrential rain from the Amazon in the north all but washes away the gravel roads that serve our community. before winter came each year I was sent off to live with my grandparents in the city of Cochabamba, approximately eighty miles to the north of my parents farm so I could continue my education. I was never particularly interested in school, my learning was severely disrupted by the fact I missed much of the year working back home in Torotoro, but I absorbed enough to read and write coherently when required to do so, but I did learn one thing in Cochambamba, something that I learned to love and absorbed every facet of information I could learn on the matter, Football. 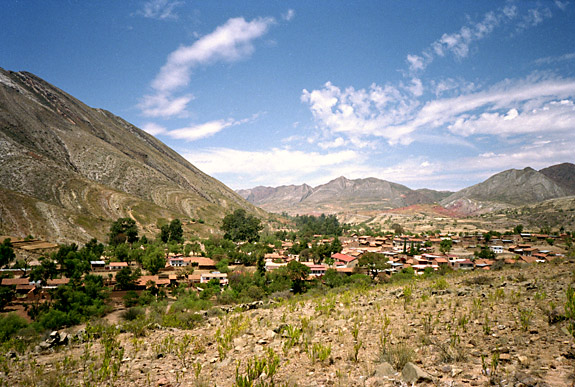 Torotoro, Bolivia
My first exposure to the sport came when my good friend Fernando, who was already a huge football fan, was given money as a birthday gift to attend the local derby between CD Jorge Wilstermann and Club Aurora, Fernando asked me to go with him which I agreed to do as I had nothing better to do that day, but as soon as we arrived at the stadium, the Estadio Felix Capriles which the two clubs share, I was sucked in, the noise was incredible, 32,000 people singing, shouting and clapping, united in their love for the game and hatred for the opposition. Fernando was an Aurora fan so we stood with their contingent, all attired in the clubs sky blue livery, the feeling of belonging was palpable and I couldn't get enough of it. Fernando explained the rules of the game as the match progressed and I became more and more enthralled in the antics both in the stands and down on the pitch, the game finished in a 3-2 victory for Aurora with no fewer than three red cards for aggressive challenges and on field brawling. As Fernando and I left the stands I declared there and then I wanted to be a professional footballer such as those who I had just witnessed electrify an entire city by merely kicking a ball around. 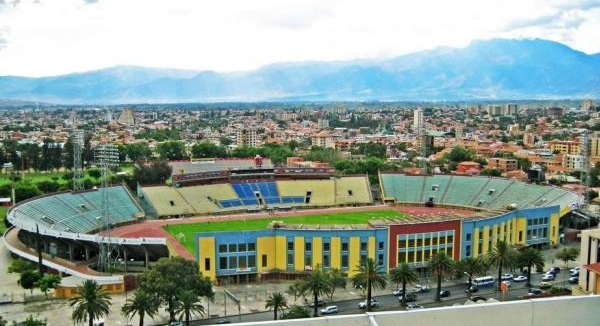 Celebrating winning the league in 2008
After my retirement Jorge offered me the job of youth team manager on the recommendation of Hector who briefly served as my assistant before his death in January. I will be eternally grateful for all he did for me, the old man not only gave me my big break to get into the sport on a professional level but also took me under his wing and mentored me in the subtle arts of tactics and man management.
Please note; this back story and characters, including Juan Cardoso are entirely fictional.

Got a genuine chance of some silverware in my second season with Villa after reaching the semi's of the League cup;

Hull are currently fifth in the Championship so we will be favourites, especially with the first leg being at Villa Park.

We're currently on a good run, undefeated in seven games in all competitions.

This has put us in a good position in the league, well clear of relegation troubles;

Seems to have gone by largely unmentioned that the U21's won the Toulon tournament last night, beating France. The first England team to have won anything in over 20 years.
Rick87 28-05-16 - 09:23

I'm currently playing as Villa, I holidayed for a season and oddly enough they were relegated without signing or selling anybody in January, just as in real life. I completely overhauled the squad for life in the Championship and sold no fewer than sixteen first team players and bringing in fourteen new faces. Our attacking style just about won us the Championship title as despite a strong challenge by Blackburn;

We also had a great run in the FA cup, reaching a Wembley semi-final against Manchester United;

Back in the Premier league we have fared ok, some solid performances so far have us sitting exactly where I hoped we would in a nice solid mid-table position as well as having reached the last eight in the League cup.

Here is my squad;

Guess it's time to start hanging out with you lot.

Yeah that's pretty much what I thought. Not sure if makes me look bad wanting away so fast though. Not really desperate to leave my job as duty manager at my two shops I look after currently but this position I'm applting for is for a actual shop manager role so ithat would be step up in job title even if the pay is only about 1500 more a year.
Rick87 25-05-16 - 07:18

I've just applied for a new job, but I've only been in my current position since February, if I get an interview how should I approach the inevitable issue of why are you leaving after just four months?
Rick87 25-05-16 - 07:15

That looks pretty hideous and unappetising. And the chicken isn't great looking either.

Aston Villa Football Club is pleased to announce that an agreement has been signed today for the sale of 100% ownership by Randy Lerner to Recon Group owned by Dr Tony Jiantong Xia subject to the approval of the Premier League and the Football League. Once those approvals have been granted and the new board members approved under the fit & proper rules of both leagues, Dr Xia will become Chairman of Aston Villa. The Club will announce the appointment of a new manager shortly.

Randy Lerner has sought the right new owner for Aston Villa who would take great care of the Club and restore its fortunes. He believes that Tony Xia is an excellent choice.

Recon Group is Dr Xia's privately owned holding company that owns the controlling interest in five publicly listed companies on the Hong Kong and Chinese stock exchanges and many other private companies employing 35,000 people in 75 countries.

Dr Xia played football as a striker until he finished at college and football has remained his passion. Dr Xia decided to buy an iconic football Club in England as the cornerstone of his Sports, Leisure and Tourism Division. He became a fan of Aston Villa many years ago and is delighted at the opportunity to become the new owner.

Dr Xia's immediate objective is to return Aston Villa to the Premier League and then to have the Club finish in the top six, bringing European football back to Villa Park. He plans to make Aston Villa the most famous football Club in China with a huge fan base.

Having to dig deep into my patience this afternoon trying to teach my 91 year old volunteer to use our new touch screen tills after 20+ years of using an open all hours type machine.
Rick87 10-05-16 - 13:14

Anyone good with getting printers to work?

I'm trying to print my payslip from last month, but all I am getting out of the printer is the shaded boxes which on screen contain all my information,however when it's printed the boxes are all empty of text.

Fucking hell, Fellaini gets banned and we somehow put out a worse side than usual.

Resting players when we've still got a chance of top four. Criminal.

Van Gal just wants to ride off into the sunset with the FA cup, doesn't look like 4th or 5th matters much to him.

Pretty special around here at the moment, most of the shops and houses adorned in blue and white leicester stuff and almost everyone walking home past my shop in kit. I'm going to the pub after work to watch the game, bound to be one he'll of a party when Wes Morgan lifts the trophy.

This season is just the gift that keeps on giving for Villa supporters.

According to him the banks only loaned Arsenal the money to build the stadium on the provision he stay as manager for at least five more years, and he hinted there were other clubs trying to hire him at the time. BBC Sport
Rick87 25-04-16 - 22:03

Can't wait for Sunday now, I live in Leicestershire so it is going to be amazing in the pubs for the Man United game.

I noticed on my FB trending doo-da last night that there is a Red Dead Redemption 2 coming out. Completely slipped under my radar that, can't wait though as a loved RDR1.
Rick87 19-04-16 - 07:01

Shay Given starting for Stoke tonight.

Mervyn King and David Bernstein have resigned from the Villa board of directors just a month after being appointed. avfc.co.uk

I like the sound of the line about being in advanced negotiations, Hopefully this is an indicator Lerner has dropped his price and is prepared to just cut his losses.
Rick87 16-04-16 - 17:16

Well that's the relegation finally confirmed then. It's almost a relief to finally have it official after being dead in the water since before Christmas. Perhaps relegation isn't the worse thing that could happen as some of the mercenaries the club spent millions on who have put in fuck all effort all season will hopefully leave and we can build a fresh new squad with some of the talented academy players such as Hepburn-Murphey and Andre Green coming through under a new manager.