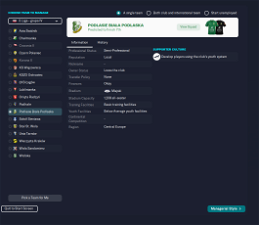 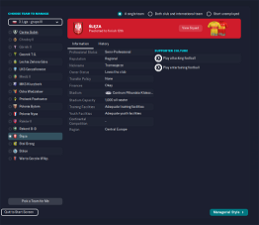 As usual, yearly file to start your save as low as in 4th level in Poland.

Fortunately, all league sizes are the same so I didn't have to make the rules twice. Tested for 10 years in the game, all is okay.

Probably I will pass on creating lower divisions for now, so sorry if someone expected 5th and lower levels.

Where can i find kits for the lower leagues? 🙂

As always, many thanks! 🙂

You can check on the german community forum, they should make something within few days https://www.meistertrainerforum.de/index.php/board,36.0.html

I certainly won't do them, so watch the fansites and their download sections. And official forum as well.

my updated transfers bonus file (mostly in poland but all over the world as well like Ryan Thomas, Toni Dovale, Aljaz Struna)
https://www.mediafire.com/file/x06wf0g28bzeldh/transf.fmf/file

How to unlock the Polish Lower Leagues on FM
1) Download the Data File.

2) Drag the file into your "Editor Data" folder. located at \Documents\Sports Interactive\Football Manager 2022\editor data. If this folder doesn't exist, create it.

3) Open Football Manager 2022 and start a new career, In the top right of the screen, under "Database", make sure this Data File is selected.

5) Once the database has loaded, click "Add/Remove League", then tick "Poland". The Polish lower leagues will then be playable.

where can i find logos for poland lower leagues?

where can i find logos for poland lower leagues?