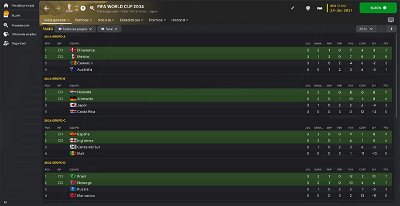 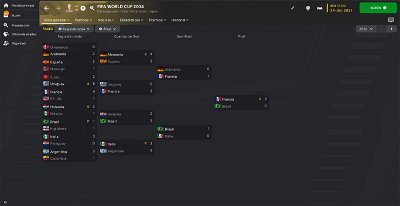 Hello everyone, I bring you a file that maintains the world cups with 32 selections, with the same format that it had until Qatar 2022.

-Copa América with 16 teams (6 from CONCACAF)

- The places by confederation that were held until 2022 are maintained

Mexico, the United States and Canada qualify directly, so there are only 1.5 places left.

- First round the remaining 32 teams go to 8 groups of 4 teams, the leaders of each group advance to the second round.

- Second round: 2 groups of 4 teams, the two leaders advance.

- Third round: The two leaders of the previous round play back and forth, the winner goes to the World Cup, the loser to the intercontinental play-off.

- First round: 9 groups of 3 or 4 teams, the leaders and the 3 best seconds advance.

- Second round: 3 groups of 4 teams, the first places go to the World Cup, the best second advances to the intercontinental play-off.

- Second round: The 10 teams face direct elimination, the winner of each series goes to the World Cup.

- Second round: 4 groups of 6 teams each, the first places advance to the World Cup, the second best goes to the intercontinental play-off.
Separate qualifiers are created for the Asian Nations Cup.

The UEFA, OFC and CONMEBOL qualifiers remain in the same format, only the quotas are modified.

Intercontinental play-offs:
They return to the format that was in place until 2022, with 2 round-trip rounds.

To install it, you just have to copy the downloaded file to the editor data folder and select it when starting a new game:

Do you have a separate file with just the Copa America w CONCACAF format?  I'd like to be able to use that and IRL new World Cup format.

Either way, THANK YOU for making and sharing this.

Big Thumbs Up to you