8 minutes ago
Load FM! commented on: FM20 - A Wandering Dork

3 hours ago
Bart0 commented on: SS Fantasy Kits ONLY Thread (NO REAL KITS) 3 hours ago
A new version of our data update was released with 73796 changes from 263 contributors.

4 hours ago
CountVladimir commented on: Facepacks Release thread - NO REQUESTS

4 hours ago
ExtremeGravity commented on: SS Fantasy Kits ONLY Thread (NO REAL KITS)

4 hours ago
mparry857 commented on: SS Official Kits Thread 4 hours ago
A new version of our data update was released with 73739 changes from 263 contributors.

5 hours ago
v7ville commented on: SS Template Thread 5 hours ago
A new version of our data update was released with 73639 changes from 263 contributors.

6 hours ago
pompey1 commented on: SS Fantasy Kits ONLY Thread (NO REAL KITS) 6 hours ago
A new version of our data update was released with 73555 changes from 263 contributors.

7 hours ago
Hajdučki sin commented on: 3D Official Kits Thread 8 hours ago
A new version of our data update was released with 73542 changes from 262 contributors. This is bloody hard, I need to get rid of one foreign player after my transfer activity but I just don't know who. I think Jakobsen is prolly the one who will go as I bought in Thwaite and we already have plenty of CB in the squad.

Edit: Nevermind Cahill is on a guest contract worked everything out

Well I went to finally finish season 2 and my save is corrupted and won't load. So looks like no points for me in the second season

Second season Hernendez picked up a ligament injury which has ruled him out for 5-7 months for me. Luckily I picked up Balotelli on a free in the summer.

Okay so a random guy is in charge again.

We started off very slowly 2 draws and 2 defeats in our first 4 and pressure was on immediately. Took a lot of tinkering with the tactic but finally got something that worked. AND MY GOD has anyone else ever managed a side so full of whingers? I honestly had at one point 6 players in a row whinge about game time. It was so bad and annoying I am just gonna try sell them all off useless pricks.

Well as it turns out that poor start is pretty much what cost us the league in the end.

We came so fucking close to knocking off Madrid, bloody away goals. Would have had a very winnable tie against Lyon in the next round too.

Had a very easy run in the cup apart from the Bayern game which took us to extra time with Hernandez bagging the winner off the bench.

Won the manager of the year award.

Well I got sacked. Game was against me from the start, the injuries kept piling up, Cattermole got suspended every 2nd game, was almost impossible to have a settled squad.

Everyone went Long, I went something different with Keane, Long scored against me. Prick.

Relegated and sacked so -50 points there.
Lost in the 3rd round so +5 points.
Didn't beat Middlesbrough or play Newcastle so nothing
and no bonuses.

Thats an injury crises immediately! Are they long term?

Ndong 2 weeks, Defoe 2 months, Borini 4 weeks. It's fucked my plans for the transfer window, half my team is unfit and or coming back from injuries this is going to be tough hahaha.
mr.SPANKY 20-06-17 - 11:12

Count me in, I remember how fun these used to be. Had a good start in my first game, unfortunately this happened: Now just one away from the league record. Our next game is against 17th placed Guiseley so hopefully his form stays up and he snags the record here.
mr.SPANKY 10-05-17 - 08:22

From memory I think this is the only player of the month award any of my guys have received. Big month for strikers though with all 3 players scoring 6 goals despite the shortened month.

Skapetis also claimed player of the month and I claimed manager of the month, my first of hopefully many more.
mr.SPANKY 10-05-17 - 08:18

A small but unbeaten month sees us shoot up to 10th. Such a tight competition though, at the beginning of November I was 2.40 to get sacked, after our win against Tranmere I somehow went to 1.90 to get sacked. We are 9 points off the lead and 8 points from bottom so a couple of bad results and I'm in the dog house again. Our form is purely based on Skapetis ability to perform at the moment, he bagged 6 goals that month and is one MoM away from breaking our record. If he hits a dry patch I worry about the rest of the teams ability to find the net.
mr.SPANKY 09-05-17 - 02:27

Another mixed month, 7 points sees us drop back into the drop zone and fucking Whitehawk scored late goals against us in both games before knocking us out on penalties. We really needed the income from an FA Cup run.

Skapetis is finally starting to show the form I thought he was capable of, he's now on the verge of breaking our MoM record, however the rest of the team aren't really performing and we have a couple of players that really like to get red cards which pisses me off.
mr.SPANKY 09-05-17 - 02:17 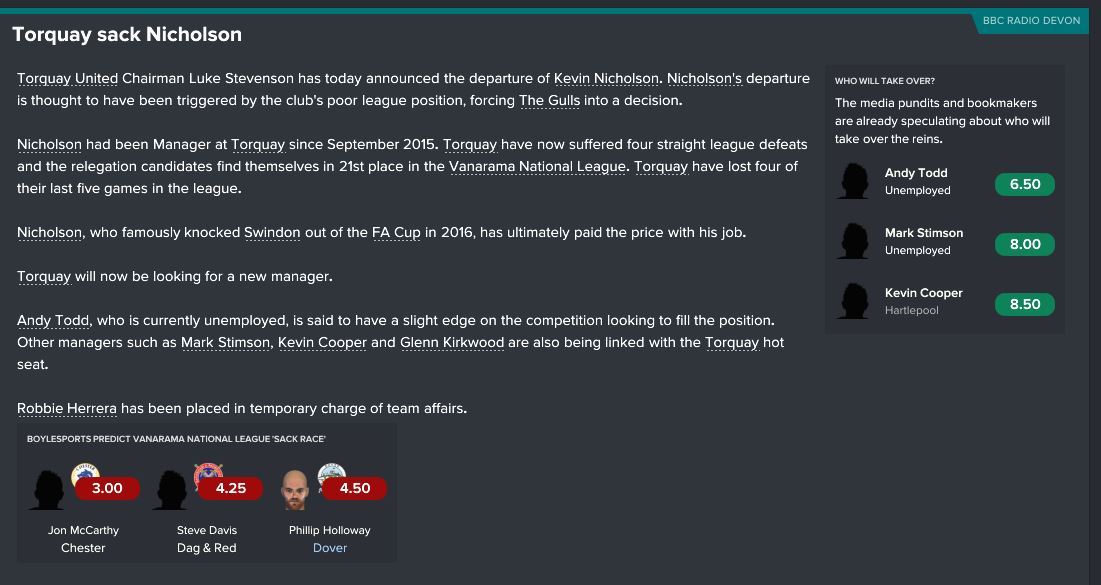 A much better month. Made a few tweaks and we are controlling the ball much better and our defence has been rock solid. Still not the greatest in front of goal but that will come I hope. Only the one blemish and again it comes against a team near the top of the table so we need to work on our game plan against the better teams.
mr.SPANKY 09-05-17 - 00:40

So friendlies went largely as expected. We were surprisingly competitive against the premier league teams and beat the teams we should have.
mr.SPANKY 08-05-17 - 03:53 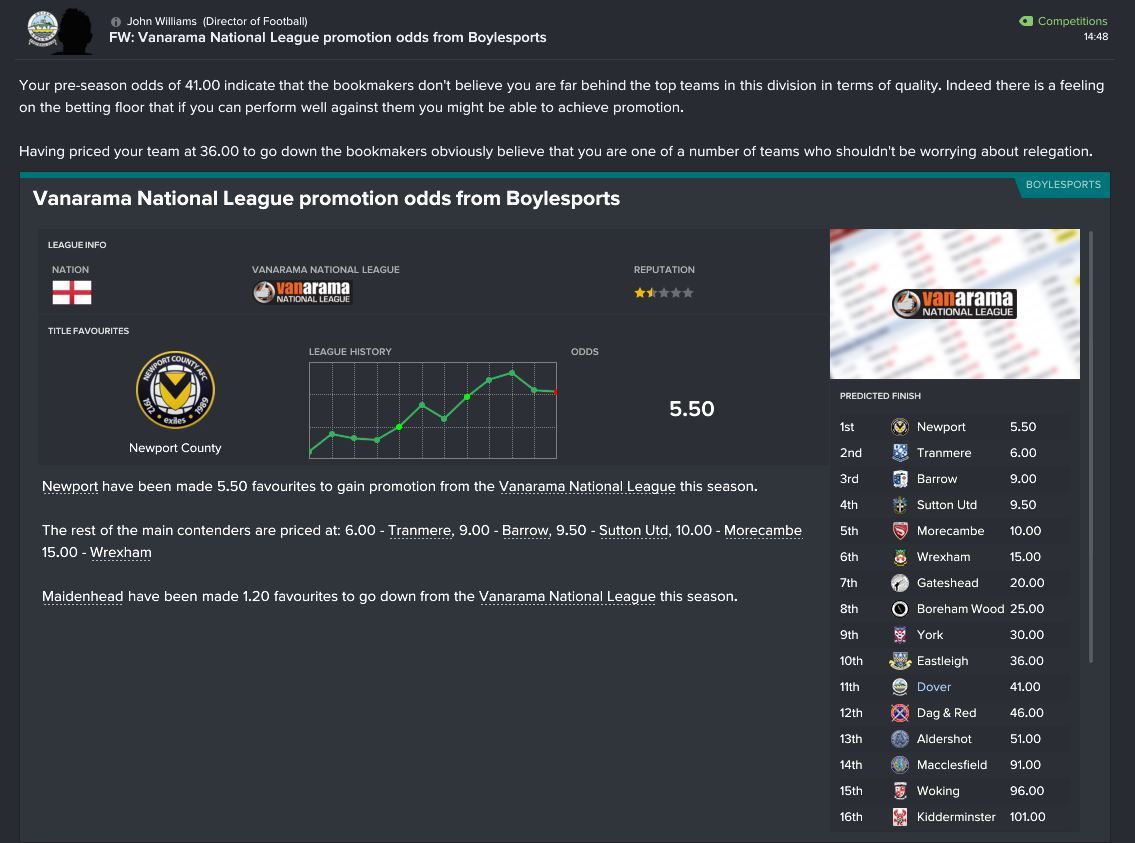 Got him on loan from affiliate Burton so costing nothing.

I now only have 5 players excluding my strikers and goalkeepers that can only play in one position. 10 of them can play 1 to 4 positions which is great for such a small squad meaning I have cover for nearly everyone and no one should be unhappy about game time.
mr.SPANKY 08-05-17 - 03:38

My transfer business, this will be all I do as we are struggling, we are still over the wage budget by 1k which is disappointing but I have no talent to bring up from my youths.

The fans are happy about all the signings and the scouts all rate them so happy to have snagged them. There was 1 player who I unfortunately had to cancel his transfer as we just couldn't afford it.
mr.SPANKY 08-05-17 - 03:11 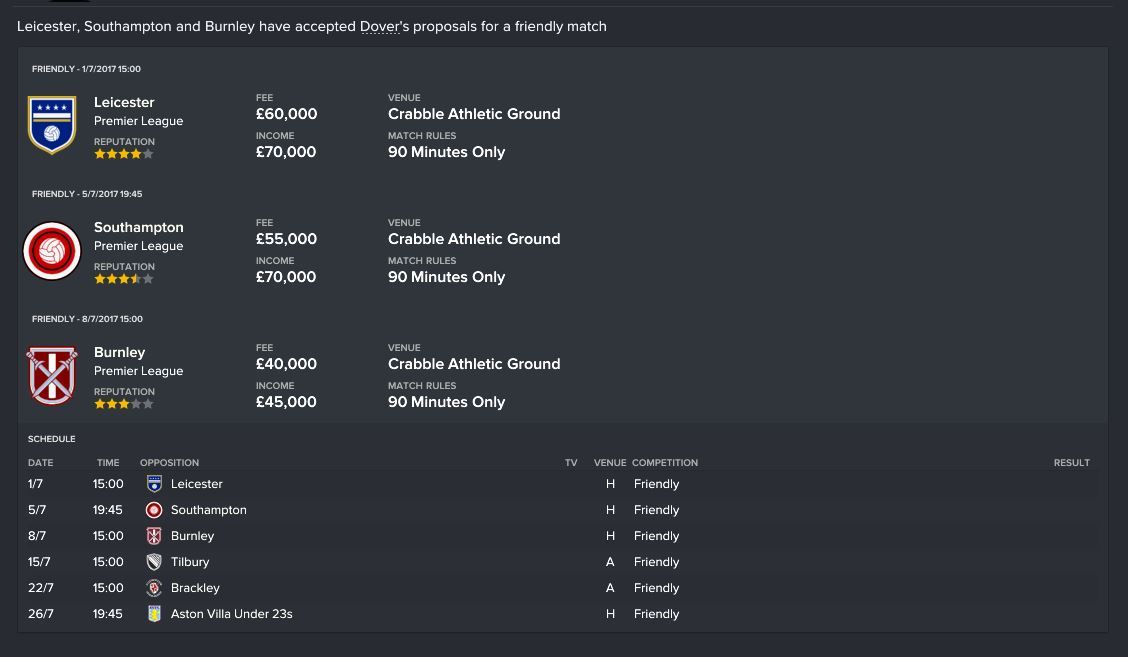 Now these fixtures are purely for financial gain, I fully expect us to get absolutely destroyed.
mr.SPANKY 08-05-17 - 03:09 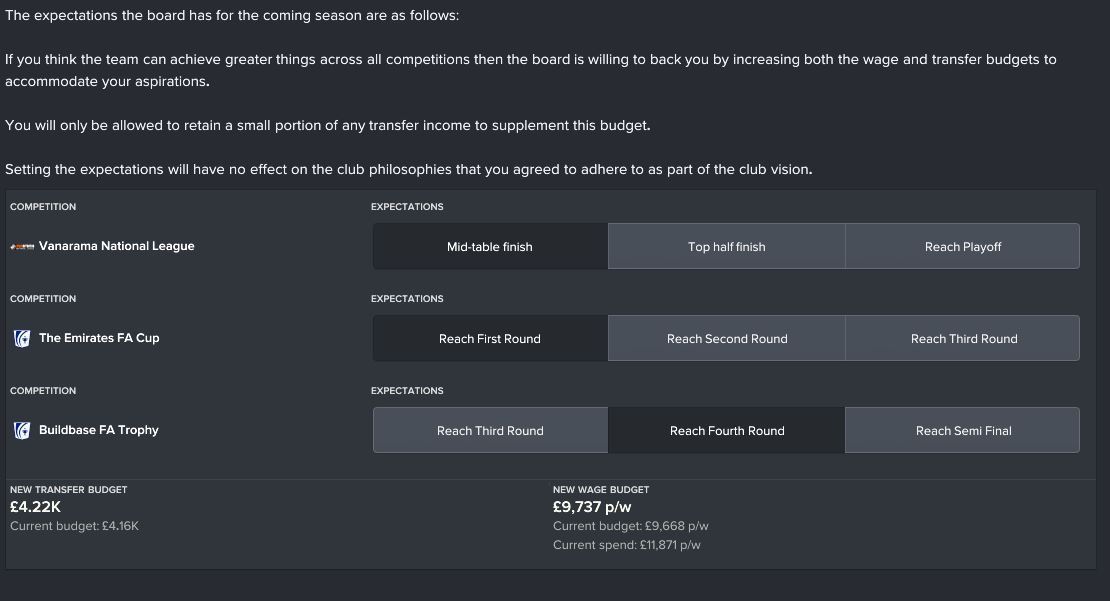 Gonna keep expectations relatively low especially with wholesale changes I am forced to make as you can see by current wage spend and my limit.
mr.SPANKY 08-05-17 - 03:08

New season is upon us. I've been pretty quiet atm, waiting for contracts to expire things like that but expect a few moves in July.
mr.SPANKY 08-05-17 - 02:24 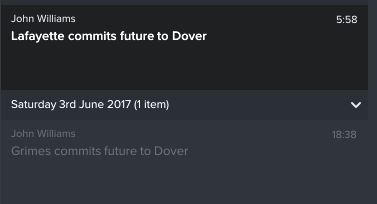 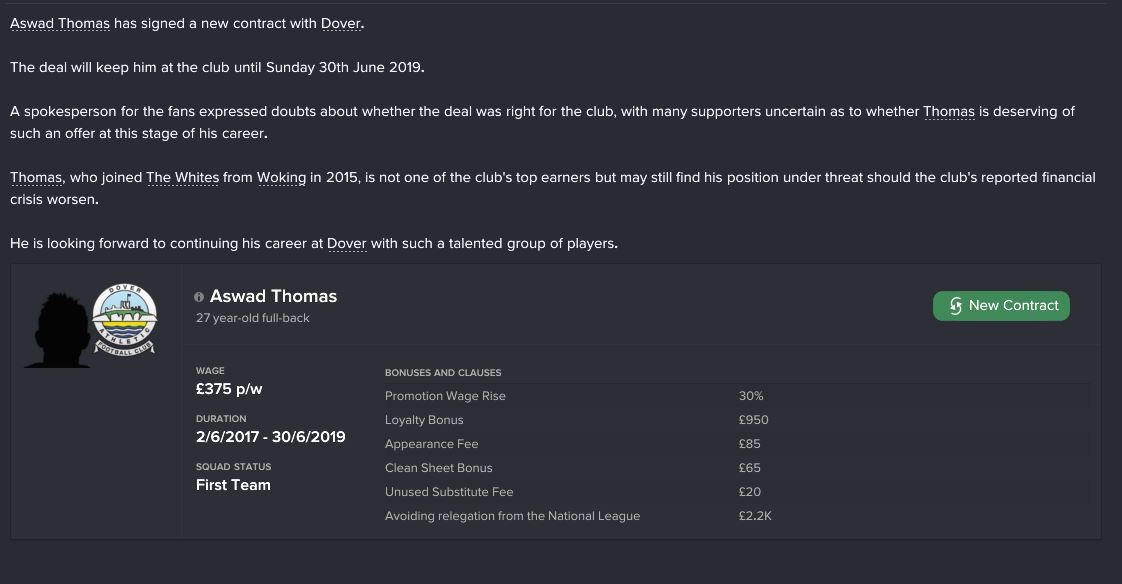 Another one locked down, everyone who I have offered extensions too has been between £50 and £200 cheaper than the last contract which is the first steps I'm taking to ensure we don't go bankrupt.
mr.SPANKY 08-05-17 - 02:10 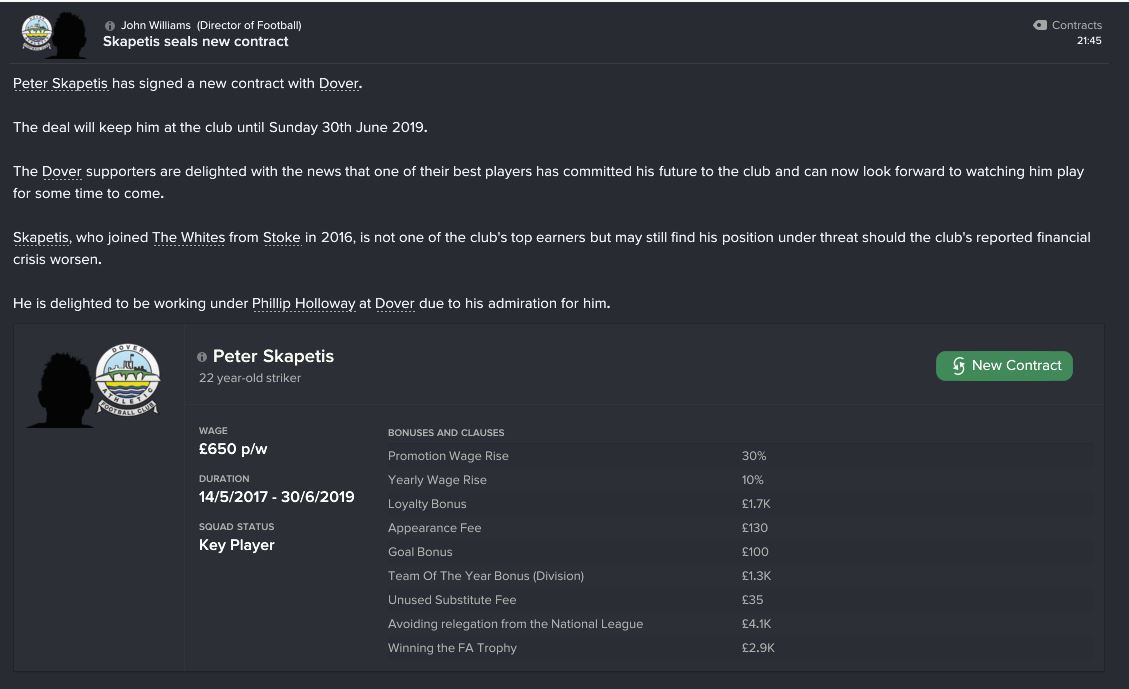 So he finally signed a new contract, it's a little high with quite a few clauses but there are a huge number of players leaving which I will look to replace for cheaper.
mr.SPANKY 08-05-17 - 01:12

Here is the final table.

Okay for next season I think I will skip the game by game updates. I might go for a pre season, half season and end of season update with interesting results transfers news items etc that pop up in the mean time. 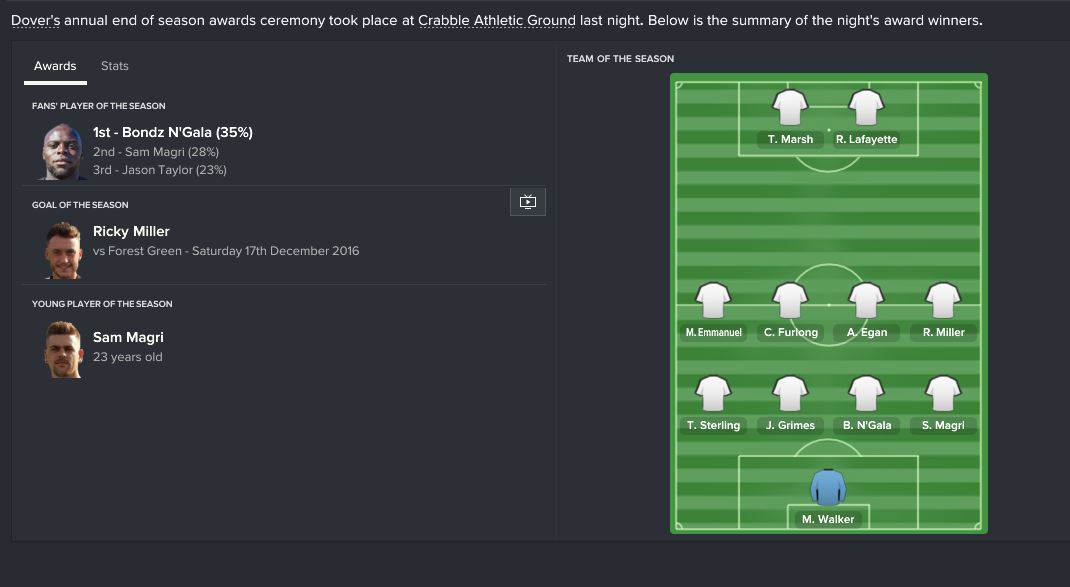 No surprise Bondz was our player of the year, guy was an absolute rock and chipped in with some goals. Magri is one of the real quality players in this side too and I don't think it will be long before one or both are looking to move up the division.

Furlong made team of the year despite only playing half a season and not wanting to come back on loan. Guy was class. 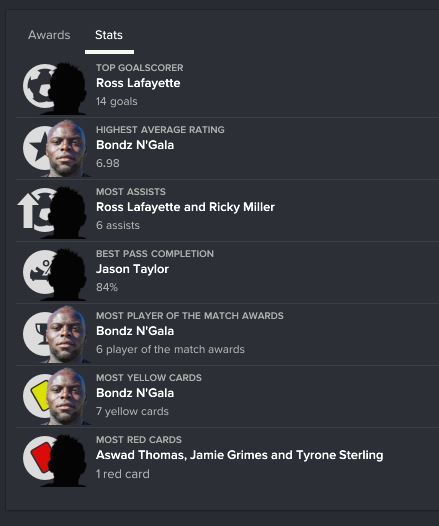 I had bigger wraps on SKapetis but Lafayette was the better player in his target man role. Not only did he score them himself but lead the way with assists too, just need to find a partner for him now. My man Bondz popping up everywhere good and bad loved a yellow card but evened it out with his MoM performances. 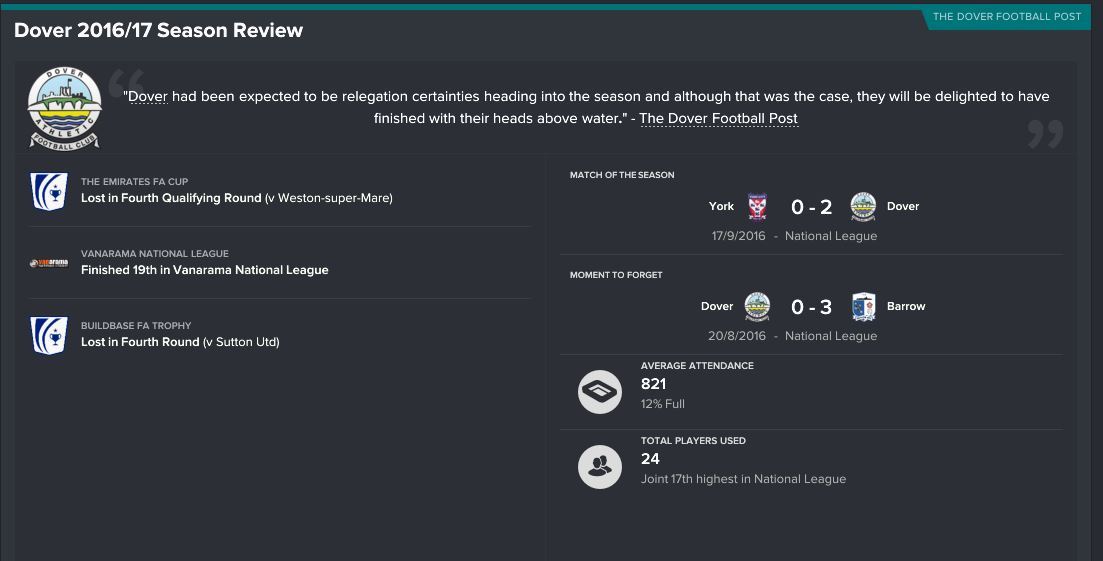 We need to work on getting that attendance figure up if we wanna start turning a profit. You can also see that we only used 24 players all season, I was very lucky in that my team stayed relatively injury free so I was able to maintain a constant 11 which obviously aided us in our end of season push.

Just so you can see my team and how they performed roughly, goals were shared around quite a bit and my defence was pretty damn good but you can also see the issue I have with a few players wanting out and overall negative morale.
mr.SPANKY 08-05-17 - 00:59

Saved one of our worst games for last of all but with safety guaranteed I suppose they could afford to phone it in.

End of season wrap will be coming soon.
FM2020 SALE