Feed
Football Manager 2020 is available to Play Now! Buy now, play instantly. Get these essential add ons to enhance Football Manager 2020 Want updated squads for FM20? We have the worlds biggest FM2020 Data Update. 5 minutes ago
A new version of our data update was released with 79648 changes from 282 contributors.

1 hour ago
mushtaq23 commented on: 💡 Logos Request Thread 2 hours ago
A new version of our data update was released with 79640 changes from 282 contributors.

3 hours ago
injilio commented on: Requests 5 hours ago
A new version of our data update was released with 79612 changes from 282 contributors.

5 hours ago
injilio commented on: ESS v5 Logo's REVIVED !!! 5 hours ago
A new version of our data update was released with 79610 changes from 282 contributors.

6 hours ago
sparta1888 commented on: Fantasy kits, FC'12 and PR style 6 hours ago
A new version of our data update was released with 79573 changes from 282 contributors.

7 hours ago
rekooner2 commented on: Facepacks Release thread - NO REQUESTS

7 hours ago
tdurb0 commented on: Please can someone do me a NBC rainbow-news Derby . A fancy new (ie different brand to the currennt 1st and 2nd kit-makers

7 hours ago
tdurb0 added a topic: Please can someone do me a NBC rainbow-news Derby . A fancy new (ie different brand to the currennt 1st and 2nd kit-makers 7 hours ago
A new version of our data update was released with 79541 changes from 282 contributors.

Good to see you giving Arsenal another go again

Surely its a bug now that you entered FIFA Club World Cup?

Wow, walked through your CL group with ease!

Doing brilliantly now compare to start of the season.

But is there need to blow 300M on Kane

That's really unlucky mate, maybe start with teams like HSV or lower league somewhere and climb up through divisions?
Johno 24-12-18 - 14:54


Came close to getting CL spot, went to the last day, we played AC Milan away, Fiorentina played Sassuolo, away. We ended up losing 3-2 and Fiorentina, won 3-1. I can't complain how the season went for us. I am surprised to see Inter Milan winning the league

Congrats on winning the league

Does worry me to see you're spending almost 4M on wages

Wenger, would completely fainted if he saw it

Aren't you getting concerned by amount of attacking players, your DOF is signing?

Fantastic back to back promotion

Didn't know they was relegated to 3rd division

What a journey from China to Italy to manage Parma

It's only taken 26 seasons but we've finally brought the Champions League to Ibrox.

Will keep eye on this progress 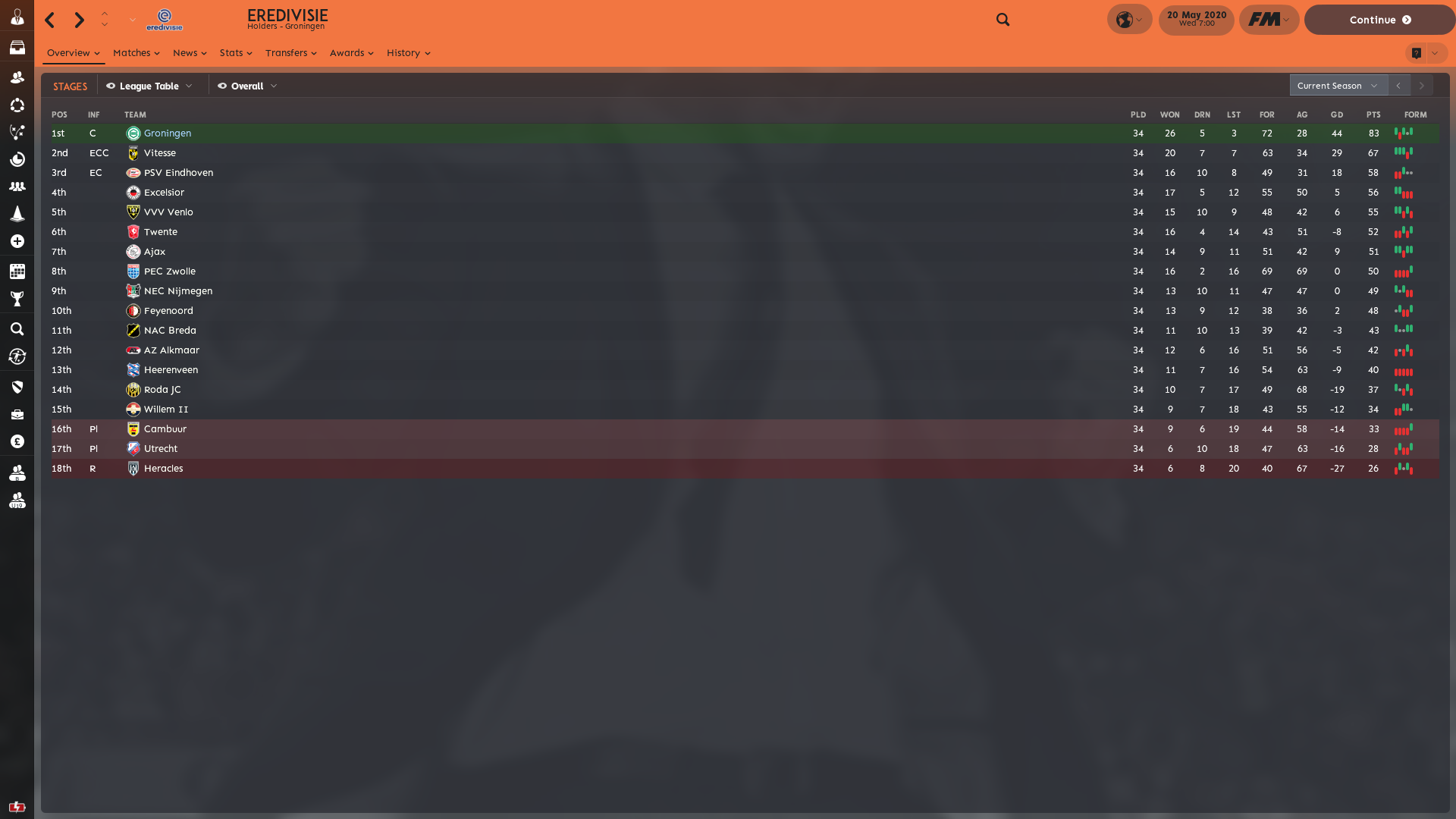 (will update the table after the play off)

Great to see we managed to defend our title, It was tough battle with PSV, which they fell apart in last 5 games, which Vitesse, won 4 of last 5 to over take them!   We haven't lost a game at home all season in the league

Delighted to win this cup. Game was pretty much over by half time in the final.


Europa League - Knocked out by Ajax in 2nd Knockout Round

Disappointed we got knocked out to Ajax. We raced to 2-0 up in first leg, blew it.  We attacked and attacked in 2nd leg (25 shots at goal) and couldn't break them down. 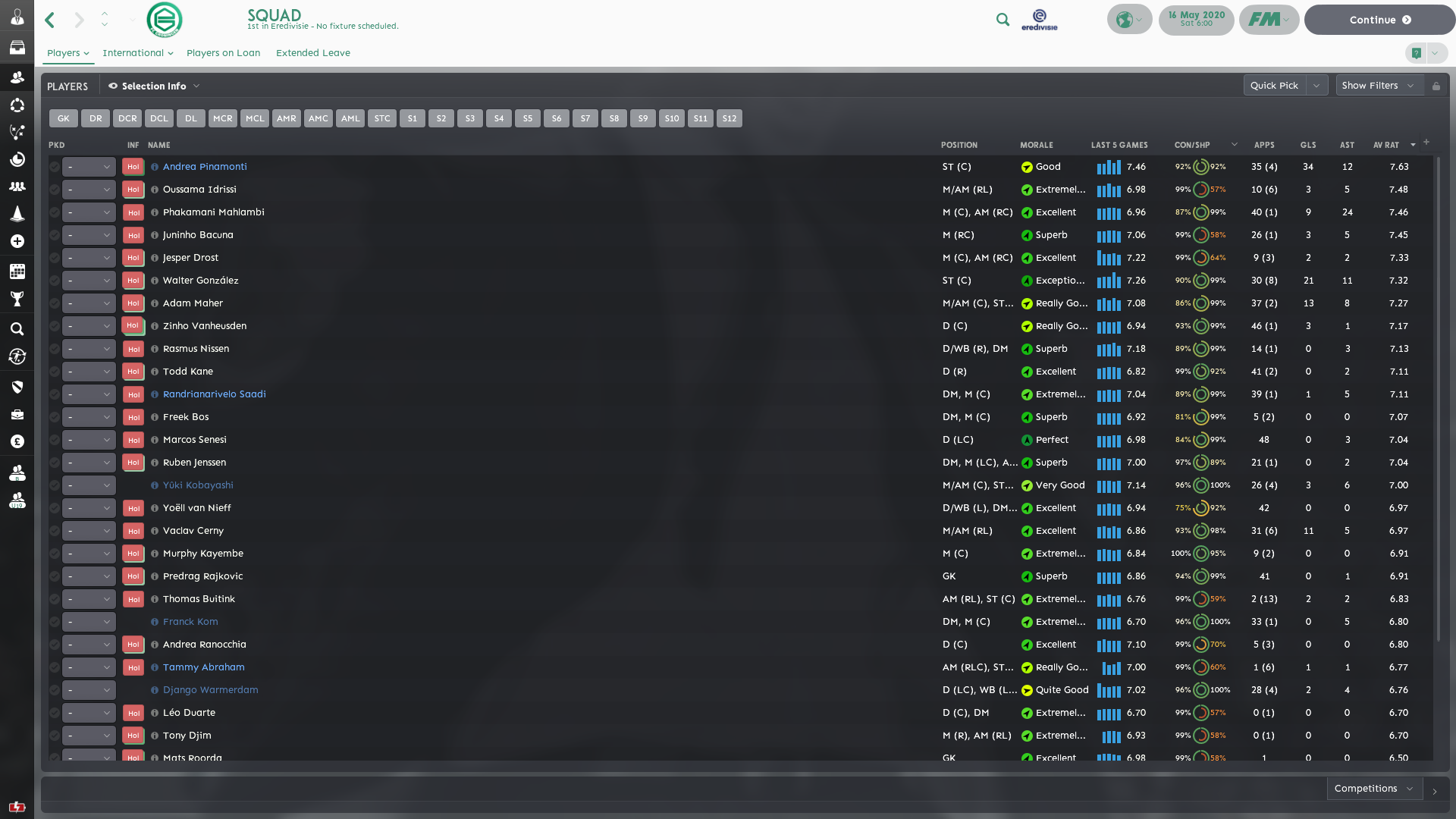 Once again, Andrea Pinamonti had a storming season for us, sadly Inter Milan want to play him in first team next season   Heartbreaking for us, but bringing in few strikers for next season to fill the avoid.  Will be looking to offload deadwood players in the summer and promote few young players into first team. 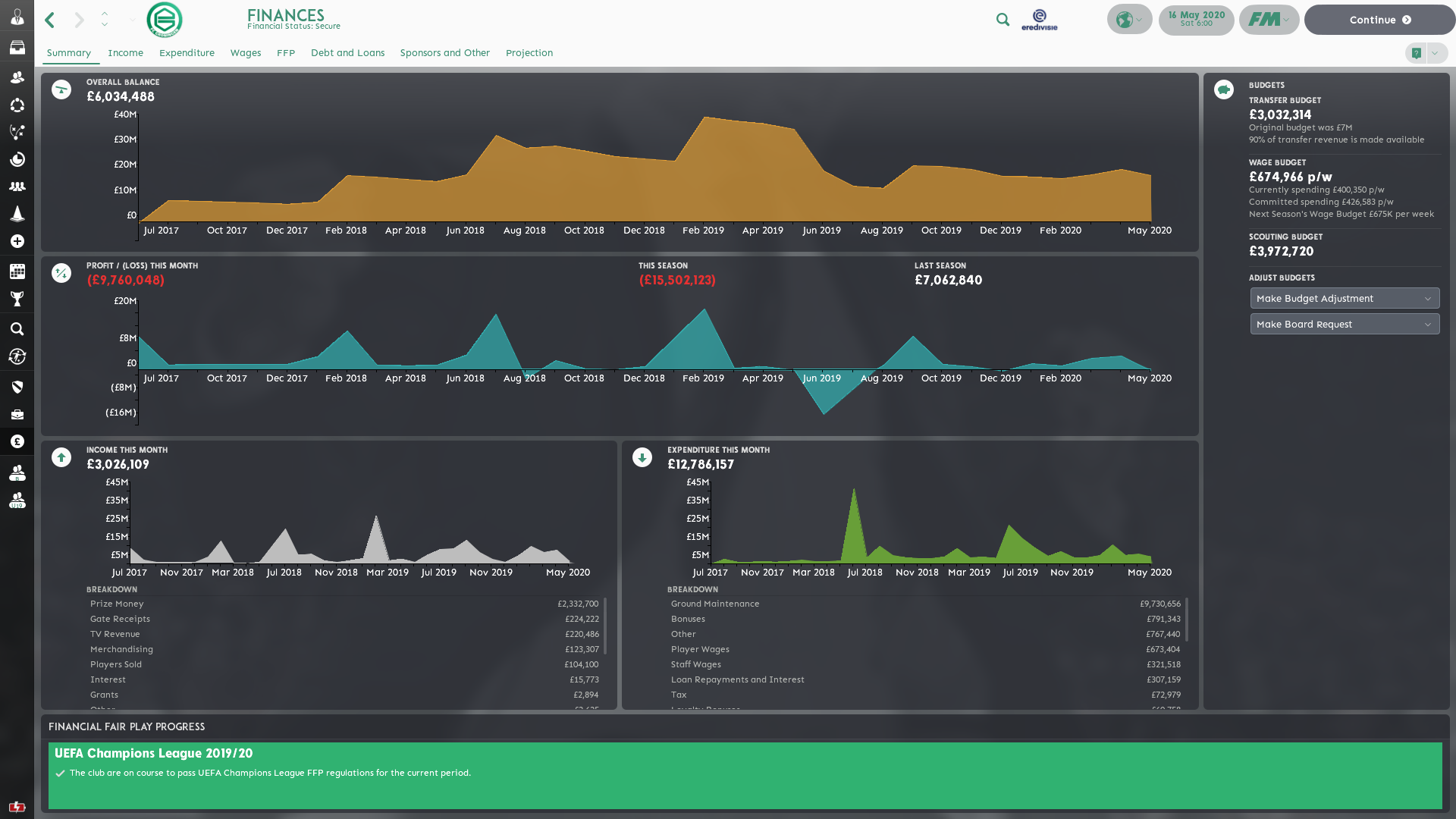 Disappointed we are in poor state   Club are in talk with a consortium to take over the club.

I am just about to finish my 3rd season with FC Groningen. First season, finished 6th, beat AZ in this play off thingy. Second season, won the league by a point! Got knocked out in Europa League by Spartak Moscow in first knockout round

3rd season, about 10 games or so left (not got FM up) about 13 points clear of PSV. Playing Ajax in Europa League second round. Will be playing Zwolle, in Dutch Cup final. Will post up screenshot when I get FM up. Was offered Wolfsborg and Ajax interview but turned both down. Ajax are currently 12th in the table (guessing) Finances at the club are quite dire, About 17M in the bank (beforehand was 40M)

Have to sell players to generate money for transfers and make money for the club unfortunately.

Slowly getting there VP

I'm surprised you sold Welbeck in the first season, he was superb for me!

Bloody hell! Good to see you are back @Tarrantino

Congrats on winning the play off final

Good luck with this @Shedender

Would be amazed if you beat them! Thankfully you qualified ahead of Juventus

Will be tough against Atletico Madrid

What skin are you using?