[FM20] Realistic Transfer Preferences 2.0 - A Collab by Daveincid and majesticeternity 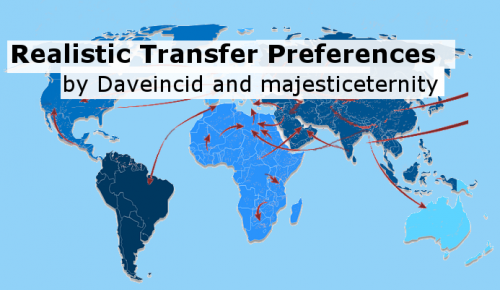 The real life transfer market is extremely complex, and every nation has their own tendencies. These tendencies vary greatly.

For example, Northern Ireland may get their players mostly from within their own nation, or from Ireland, and never from South America.

Whereas Scotland may get more players from England than their own nation, and randomly in small numbers from all over the European continent.

This "transfer flow" for each nation is poorly represented in FM.

In the default database, there are 3 sections regarding transfers, yet England has nation preferences set for only 2 out of 228 nations, and the continent and region sections are completely empty.

This file changes that.

We have compiled huge amounts of research/data/charts/etc and combined our work, to create the largest and most realistic set of transfer preferences ever created for FM.

Guides for a Realistic Setup:

Any nations not loaded as playable are hardly used for transfers. This means your save setup could be unrealistic.

For example, you want to manage in Portugal, and load England, Spain, Italy, and France also. This means Brazil is left out, the nation that Portugal most often gets players.

So, here is a list of basic guides by nation, to help you set up a decent save.

The most important nations are listed first, then gradually less important, followed by optional ones.

Place in Documents\Sports Interactive\Football Manager 2020\editor data folder. Start a new save. When selecting the database(before Advanced Setup), be sure to select the checkbox to enable this file.

Overall: This has been thoroughly tested by both of us, but considering there are so many nations and aspect to this, as well as variation in each save, there can be issues remaining. Any feedback you have would be great!

African nations: There is less data to help determine destinations of players born in African nations, and it is very tedious to compile. Data has been compiled for Nigeria, Senegal, Mali, Ivory Coast, Algeria, Cameroon, Morocco, and South Africa. This data has then been applied to Italy, Netherlands, Spain, Norway, France, England, Portugal, Germany, Belgium, USA, Turkey. As there are very few default playable African leagues, testers that load custom African leagues would be needed to ensure this information represents real life data accurately.

Affiliations: It's hard to find the data and research to determine affiliation tendencies for nations, and is also hard to know the mechanics FM uses. A few outside-of-nation tendencies have been applied, but more information could be used.

Ages: Age data is a huge task, and difficult to acquire, as well FM does not really apply the rules, but varies as it wishes. But any additional information is helpful.

hi, any ideas for updating to update 20.3? or is it working normally?

It should work just fine, it's only simple database changes, but I haven't tested it.

Will this work on the latest update? Only just bought the game today

8 years ago
7 hours ago
8,655
17 Apr 2020 17:56:19
I think the best method is to post all your problems in main forum, that way the author will respond faster
https://community.sigames.com/topic/511263-fm20-realistic-transfer-preferences-20-a-collab-by-daveincid-and-majesticeternity/

7 years ago
1 hour ago
972
Premium
17 Apr 2020 18:13:46
Wow that's a fantastic idea, top work guys. Often bugged me about the transfers sometimes being a bit.. out there. Does this change transfers that usually happen? When managers get sacked it always seems to be the same managers being hired by the same clubs for instance.

Brilliant work. Any plans to update this for FM21?

Any chance of adding Malta into the mix? Would be great, as I know a large number of users on here play the Malta leagues patch that is put out by mons every year.

Really appreciate this, it made a huge difference to my saves last year. It's an immersion killer for me without it. How long do you anticipate the testing will run before you release for FM21?

12 years ago
2 weeks ago
34
Premium
07 Dec 2020 04:04:22
Hey guys I've just downloaded your Smarter AI and Derbies files, just waiting for this one now too to start my next save. Your work is amazing and really enhances the game! How long do you estimate it may take?
Thanks in advance

Hey guys I've just downloaded your Smarter AI and Derbies files, just waiting for this one now too to start my next save. Your work is amazing and really enhances the game! How long do you estimate it may take?
Thanks in advance