1 hour ago
DGlef commented on: [FM20] Germany Divisions to Level 6 with 20 Teams

2 hours ago
Stopik commented on: Polish Lower Leagues (down to 6th level) by Bigpole (updated for 20.4 version)

4 hours ago
Qvordrup commented on: Request Thread (ONLY TEAMS, COMPS and NATIONS THAT ARE IN THE OFFICIAL FM DATABASE)

5 hours ago
rfreixo commented on: Facepacks Release thread - NO REQUESTS

5 hours ago
rfreixo added a download: Syrian Players Part -12 Mixpack 9 hours ago
A new version of our data update was released with 49396 changes from 196 contributors.

10 hours ago
RT7 commented on: Facepacks Release thread - NO REQUESTS

10 hours ago
RT7 added a download: NAC Breda Teampack 11 hours ago
A new version of our data update was released with 49223 changes from 196 contributors.

12 hours ago
tv_capper commented on: Image finder thread - assistance in finding a source image 13 hours ago
A new version of our data update was released with 49187 changes from 195 contributors.

Season 3: Regionalliga Nordost
So to begin season 3 we had a look at the squad and let a couple of players go, including Karim Benyamina, who was a great servant to the club. Mid-way through the season, we had Emmanuel Njoku , our starting centre back, wanted to leave for Chemnitz. For squad morale purposes I decided to let him go. But I was happy with our signings this time around. Our new Partnership with FC Bayern Munich lead to us getting Malik Tillman on loan for the year. Our other major signing this year was the signing of loanee Paul Gehrmann on a free from Cottbus. 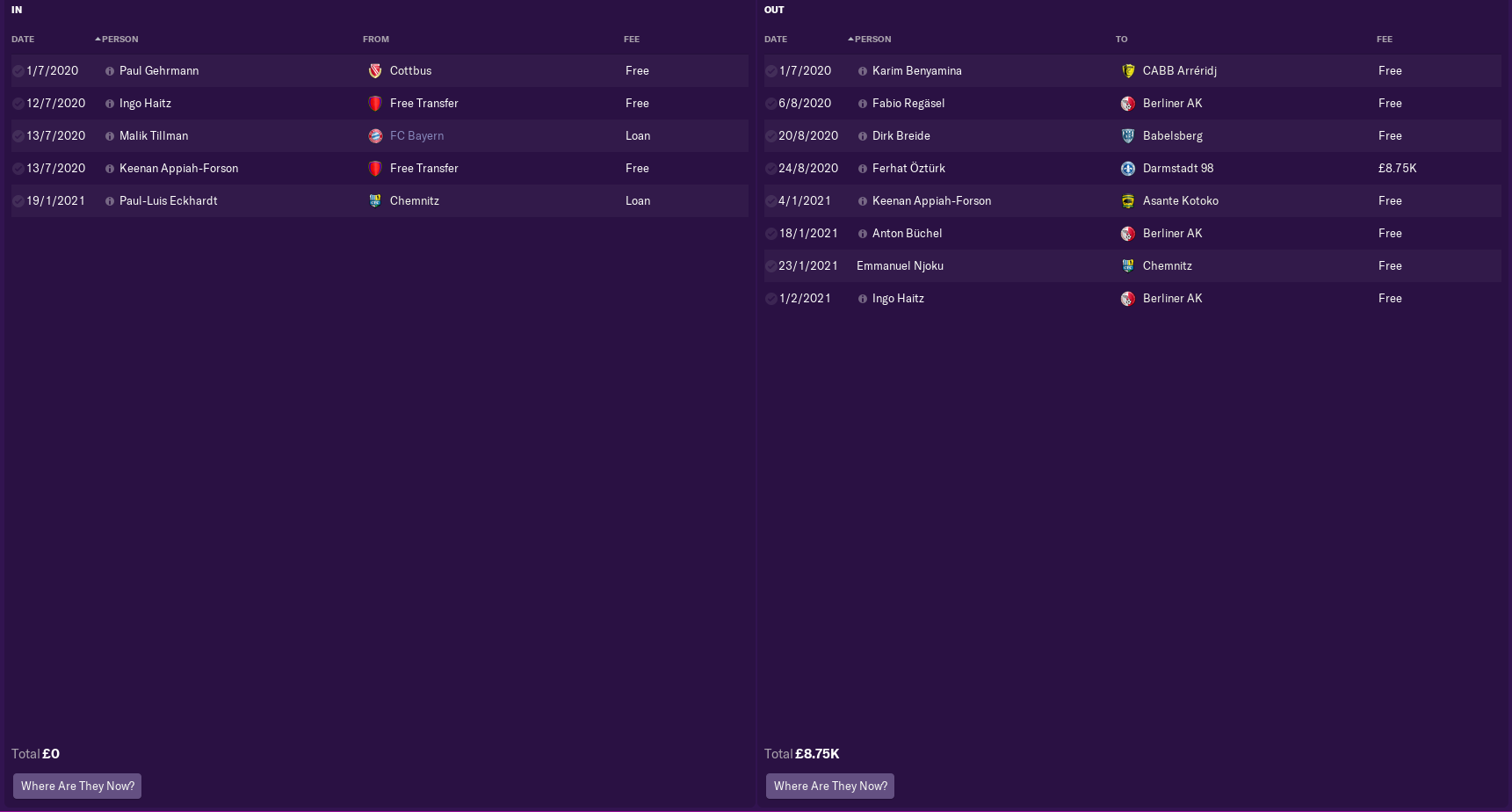 So after getting the squad the way I wanted it, we started the season with an 8 game unbeaten run. Losing 2 games to Viktoria Berlin and Rot Weiss Erfurt was disappointing but we reacted well and went 15 games (with Friendlies) unbeaten. 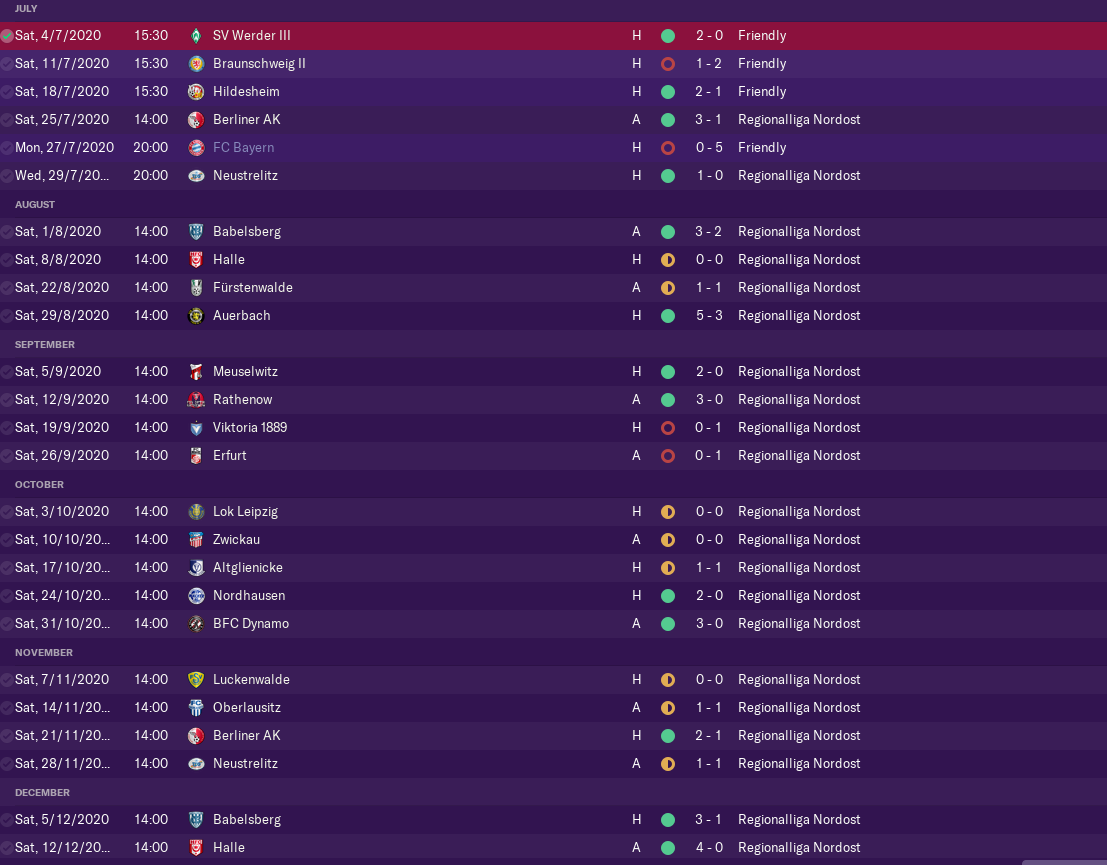 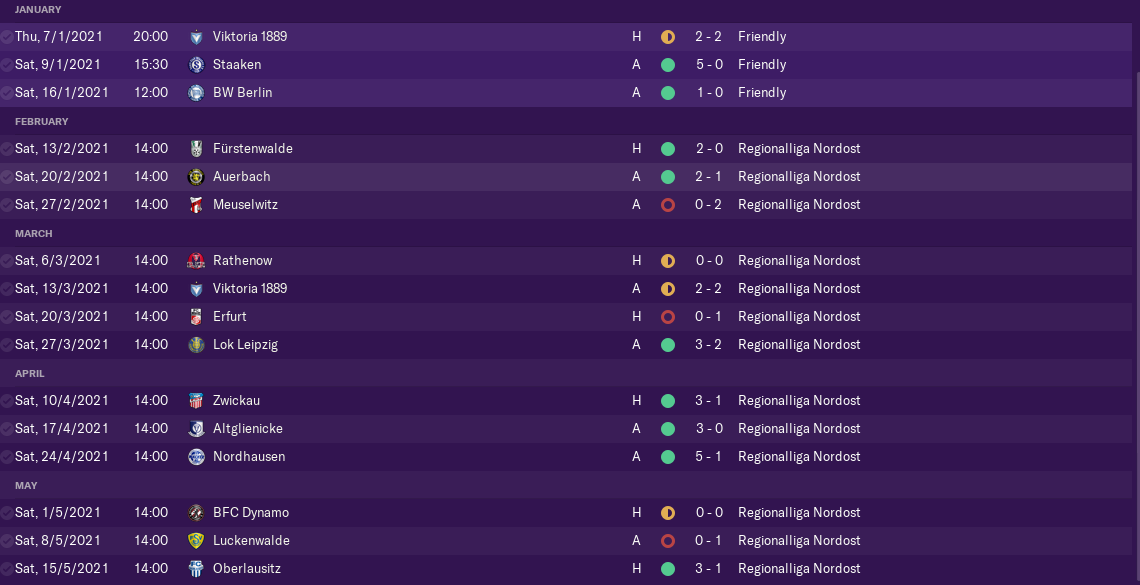 We seemed to die off and struggled a bit over the final few weeks of the season. But where did this leave us in the league?

YEEEEEEEEESSSSSSSSSSSSSSSSSSS!!! Tripped over the line to get it, but we are Champions and promoted to the 3.liga! In fairness, I worried that we had bottled it completely with our bad run at the end of the season, but we just nicked it. What a season and what a team! Delighted.

So we move onto Season 4. See you all next time!

Some massive results in this round. Cork very unlucky to go out. I was at the Shamrock Rovers v Brann game in Tallaght, and it was a brilliant performance. Brann gave us a game. Pitch invasions and madness in the South Stand when the 2nd goal went in. We play Apollon Limassol in the next round, first leg on Thursday in Tallaght.

Also @Suffolk Seasider not sure if this is allowed, if not delete as appropriate, but skorlive.com is a good spot for streaming games.
Keep on Hooping!!
davysrfc 21-07-19 - 11:08

After promotion last year, the focus switched to Regionalliga football. Early in the summer we received an offer for Eric Versteppen which we simply could not refuse. 80k into the bank and a thank you to Eric for his services to the club. But it left us a massive hole to fill considering he was a good keeper at this level. So I scouted around other lower German squads and found a suitable replacement in Dan Twardzik, at a good price of 33k. Other improvements to the squad were Nicholas Fontaine, Fabian Frinke, Omid Seberdest, Marcel Hoppe and Fabio Mirbach all signed on free transfers. Other signings were cover signings.

So pre-season focus was on getting the squad cohesion up and getting the lads to know the way we play here at TeBe. Results were worrying but I had every faith in the lads to turn things around. After a disappointing start to the season, as well as an early exit from the DFB Pokal (we only qualified for this after winning the league) to 2.Bundesliga side Greuther Furth, we dragged ourselves into form and only lost 2 games up to the mid-season break. In the lead up to the mid-season break, I felt that we couldn't lose our momentum with a 2 month gap, so I set up a good number of friendlies to keep us match fit and in the game. 9 wins from 9 was impressive. What was more impressive was our form continuing after the break. A 10 game run gave us hope at a run at the title and that coveted promotion spot! A loss to Hertha BSC's reserve team dented our confidence but we ended the season well with a win at Meuselwitz and a draw at Berliner AK. 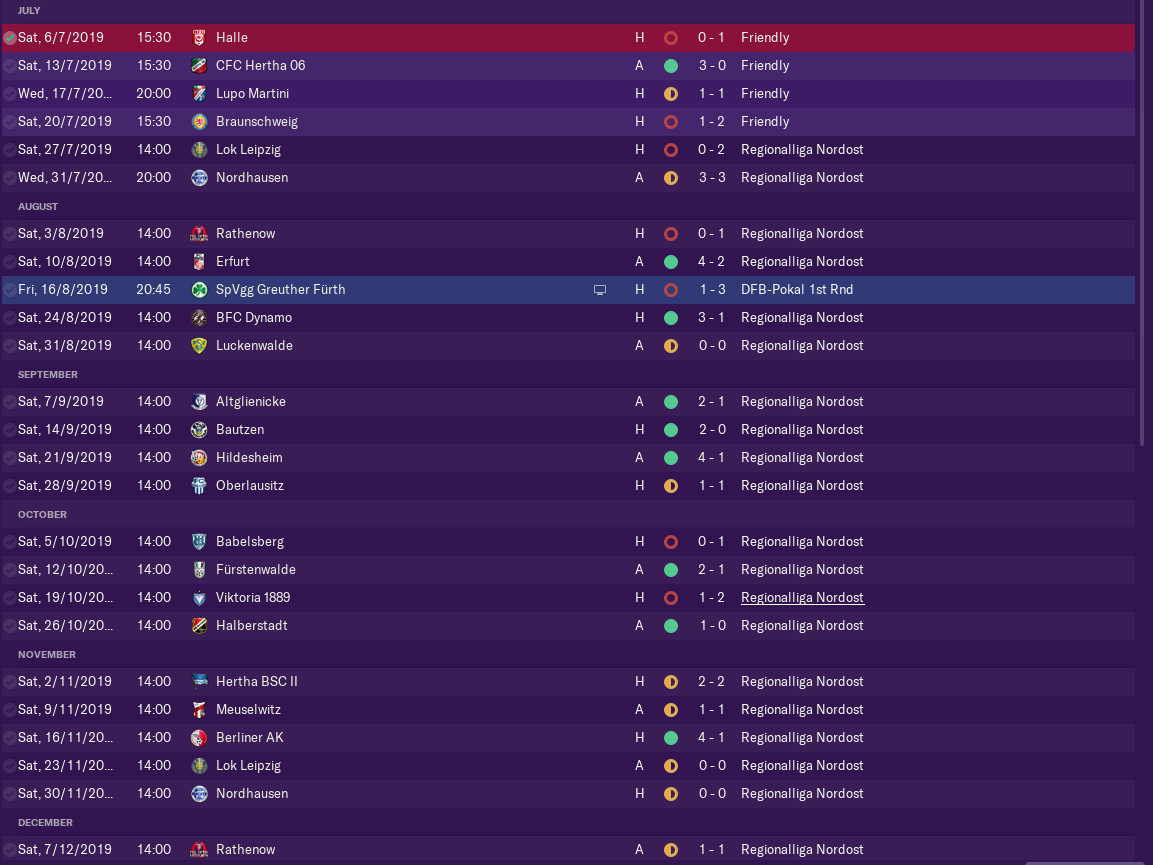 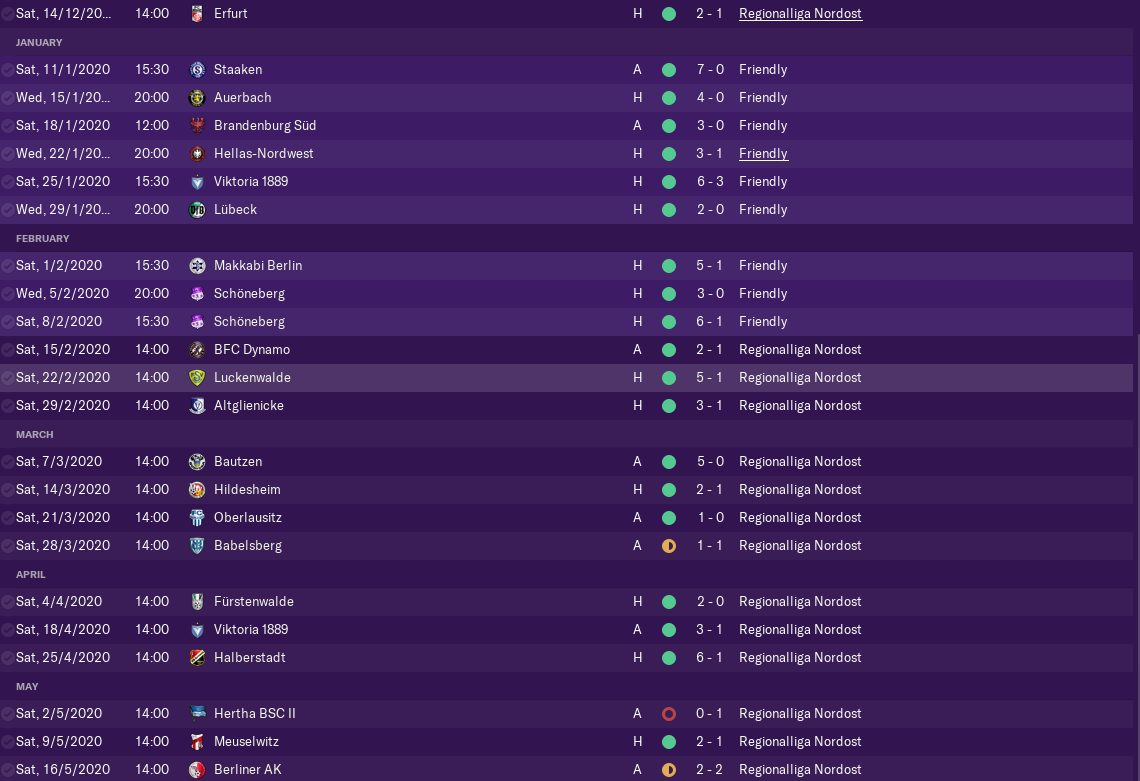 But was it enough to win the title?

No, it most definitely wasn't! Our slow start added to Hertha just being a great team for this level led to them running away with the league, losing only 1 game all through the year. But overall I was delighted with our year. The aim was mid-table at best at the start of the season and to find some of our signings having a really good season was definitely a positive to take into the future.

The Irish National Broadcaster. Usually have live games available on their player.

https://www.rte.ie/player/ Can be a bit temperamental though.

Thought that they played really well and created a few chances. Pity neither team could score.

Dundalk were rather disappointing in the home leg last week. Riga stuck to their plan really well and looked a good team considering the last Latvian team I seen were Skonto playing an awful Pats team in one of the worst games I've ever had the displeasure to go to. Should be a good game now on Wednesday. Live on RTE as far as I know for those who can get it.
Keep on Hooping!!
davysrfc 15-07-19 - 17:25

Irish teams had a bit of a disappointing week in Europe, St. Pats losing to a much better Norkopping side from Sweden in Dublin (after stealing the European spot from Waterford a couple of months ago), Cork losing to Progres Niederkorn from Luxembourg at home and Shamrock Rovers saving the week with a 93rd minute equaliser away to SK Brann in Norway. All these games (and Dundalks Champions League game in Riga) are all on TV here (and premier sports in the UK as far as I know) so something different to watch. Looking forward to Brann coming to Tallaght.
Keep on Hooping!!
davysrfc 14-07-19 - 17:59

@tongey @DNZY thanks lads, I'm already a bit ahead so you should look forward to what I have got so far.

SEASON 1: NOFV-Oberliga Nord
I began the Season 1 by looking at the squad, whilst we were favourites for the league, I felt that there were improvements that could be made. SO we took a couple of players on loan, and signed Manuel Starke to bulk up the forward line and Nelson Scultz Fademrecht to man up the midfield alongside the loan signing of Paul Gehrmann. I messed around with a couple of formations throughout the friendly period and they seemed to work well for the most part. After picking the formation I felt worked the best with this team, we started the season away to the local BW Berlin. As you can see we started the season extremely well, going unbeaten for 13 games before losing to league rivals Zehlendorf. after becoming patchy during November, and getting some players back from injury, including goalkeeper Eric Versteppen, we were right back on form and went into the mid-season break with a win over CFC Hertha 06.

During the mid-season break, we played 2 friendlies, mainly for fitness purposes. Both were wins against opposition in stronger leagues, so I was impressed. The second half of the season went rather well, going unbeaten including a massive win over our title rivals Zehlendorf (revenge for the earlier loss in the season). But did we win the league? JUST ABOUT!!!!!! That win over Zehlendorf was massive and basically won us the league. Capped off a great season.
Onto the Regionalliga Nordost!


So we move onto next season!

*If anyone has any advice or any ways of improving the story, throw a comment or a PM, more than happy to take it all on board!*

Throughout the last 8 years, myself and my friends here in Dublin, have found ourselves regularly travelling throughout Europe. About 4 years ago, myself and a couple of mates ended up in Berlin for a few days. As you do when your a football obsessed 20 something year old, we went hunting for every bit of Football we could find. Whilst we seen the wonderful Olympiastadion, the unique Stadion An der Alten Försterei, and the unexpectedly big Friedrich-Ludwig-Jahn-Sportpark, it was a stadium that we seen no game in that I enjoyed the most. Whilst on a wander after partaking in the Olympiastadion tour, we found this wonderful hidden gem, the Mommenstadion. Open to the public, we strolled around for a couple of hours. We chatted to the locals and after a few minutes of chatting, it turned to bottles of beer and stories of a team with a bit of history. Once Berlins top team, they've fallen on hard times on more than one occasion, and have seen the higher leagues of Germany, playing in the 2.Bundesliga in 1998 until 2000. In more modern times, the club is playing in the Oberliga (fifth tier), with 2 stints in the Regionalliga (fourth tier) and a long stint in the Berlin-Liga (sixth tier) between 2011 and 2015.

My overall aim is to bring TeBe, as they are affectionately known, to the top, to win the Bundesliga, to bring home the DFB Pokal, and to take it to the European Giants.

But first we have to get there.

Welcome back DZNY!
Keep on Hooping!!