15 minutes ago
Benjamin222 commented on: Facepacks Release thread - NO REQUESTS

1 hour ago
Rubenovic77 commented on: Custom kit doesn’t show up

1 hour ago
hammer9 commented on: Custom kit doesn’t show up

1 hour ago
Dan commented on: Lets go on a European journey, man!

1 hour ago
geordie1981 commented on: Facepacks Release thread - NO REQUESTS

2 hours ago
mihataaa commented on: Standard Fantasy/Request Logo only (NO PACKS) Thread

2 hours ago
HRiddick commented on: Facepacks Release thread - NO REQUESTS

For the second time this season I'm being threatened with the sack and deservedly so because we are 8th after 29 games and well out of the title race.

I need to pick up 11 points from the next 5 games and with fixtures against Chelsea (H), Tottenham (A), Stoke (H), Arsenal (H) and Newcastle (H) I think my time at the Etihad is coming to an end. This season has been absolute horrible. Out of the Champions League at the group stages, 8th in the Premier League, out of the League Cup at the QF stage, out of the FA Cup in the third round and possibly could be out of the Europa League in the second knockout round.

It's been brutal. I spent £432m on attempting to make the squad stronger and somehow they've become worse.

EDIT: Lasted 2 games and now I've been sacked. We drew 1-1 at home to Chelsea but then Tottenham beat me 1-0 and I'm unemployed.

Glad you've chosen to stay away from the big leagues @Dan at least for now. Good luck at PSM.

If I don't beat Huddersfield at home then I'm being sacked as Manchester City manager.

Well, at least I wasn't the first person on Susie to be sacked on this years FM.

But, one poor month and you're out of work and that's perhaps an extremely harsh sacking @r96Skinner but I'm sure you'll be able to find another job soon.
Shedender 31-10-18 - 09:05

This could be fun or this could fail miserably, either way though I'll be following. Good luck with it @Dan.

So in my first season I ended up finishing second in the Premier League w/ Manchester City, seven points behind champions Arsenal but we did manage to win both the League Cup and FA Cup though but failed in the Champions League, losing in the first knockout round to Real Madrid.

Second season and I've spent a staggering £432m in attempting to win the Premier League crown - Hector Bellerin (£100m), Nabil Fekir (£70m), Benjamin Pavard (£31.5), Jordan Pickford (£60m), David Alaba (£80m), Timo Werner (£50m) and Santiago Ashacibar (£40m) all joined the club. Gavin Bazunu joined from Shamrock Rovers but that transfer was already pre-arranged. Out and it was time to say goodbye to Gabriel Jesus (£90m to Chelsea), Ederson (£67m to Arsenal), Danilo (£30m to PSG), Fernandino (£25m to Barcelona), Patrick Roberts (£15m to Crystal Palace) and Marlos Moreno (£11.5m to Gladbach) while a few others left for either peanuts or on loan deals.

At the beginning of November we find ourselves in fourth place and five points off the pace but still in the League Cup and doing inconsistent in the Champions League group stages.
Shedender 26-10-18 - 15:09

Brilliant that is a start for me. Do they appear in a list anywhere to compare against other teams in the league?

If you mean as in average attendance then:

That will then tell you what your average attendance is throughout the campaign and compared to the other teams, it will also tell you how many sellouts you've had throughout the season and a few other bits and bobs as well.

Good to see you're doing a career thread for FM19 and it's the British Steel challenge, something I had been considering doing myself as I've never been able to complete it due to different circumstances - from being shit at the game to getting attached at one club. Good luck with this buddy.
Shedender 26-10-18 - 13:41

Can someone tell me where i find the attendance for my matches. 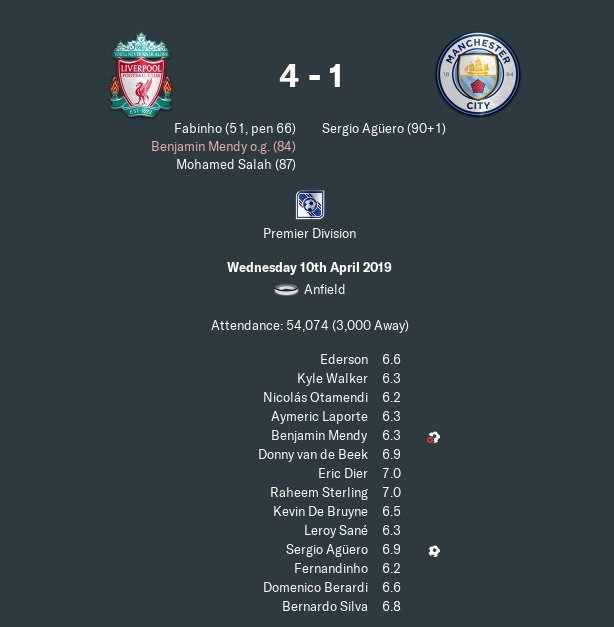 It doesn't count as a "top domestic cup" (going by the Steam achievements) but I've still won my first trophy as Manchester City boss, and in dominating fashion as well.

Well it's actually my second trophy of the season after winning the Community Shield but that's a glorified friendly so. . .

Yeah I've had a fair few, I just transfer list them

Phew, at least it's not down to my bad management then.

Has anyone noticed players take "hissy fits" quite easily on this years game or just me?

So far in 6 months with Manchester City I've already upset Gundogan (who I ended up selling to Arsenal for £73m), Gabriel Jesus (currently rotting in the U23's) and most recently Sergio Aguero decided to have a "temper tantrum" because I had the audacity to criticise his poor training - it doesn't help that the latter hasn't been scoring regularly so he's been criticised in the past for that as well but apart from that I'm currently second in the Premier League and in the final of the League Cup against Wolves.
Shedender 24-10-18 - 10:39

Good to see you're back @r96Skinner and I'll be following as per usual.

Just decided to spend £94m on Eric Dier because, you know, he's English.

Best spend it whilst I can!

Good to know that Football Manager continues to be realistic.

Sorry you can download things quite quickly if you become a Premium Member but if you don't become one then you still download but they'll take ages.
Shedender 08-10-18 - 11:56

Thanks for your reply, Now, please tell me: if I want to be a member for a year, plus football manager 2019, how much do I have to pay?

And the downloads for faces, kits, stadiums, etc, can I do that without charge me (or do I have to pay?)

For last: When it will be the right date do purchaise the game?

2) You can but it takes ages because you need to download each section and that would take an eternity.

Pfft, I haven't got a baldy what type of saves I'll be doing whenever FM19 comes out.

It's two weeks until the BETA is released and I've still not decided. Manchester City will more than likely be the BETA save so I can get used to the new training and stuff but I've still no idea on what my main save is going to be.
Shedender 13-09-18 - 18:22 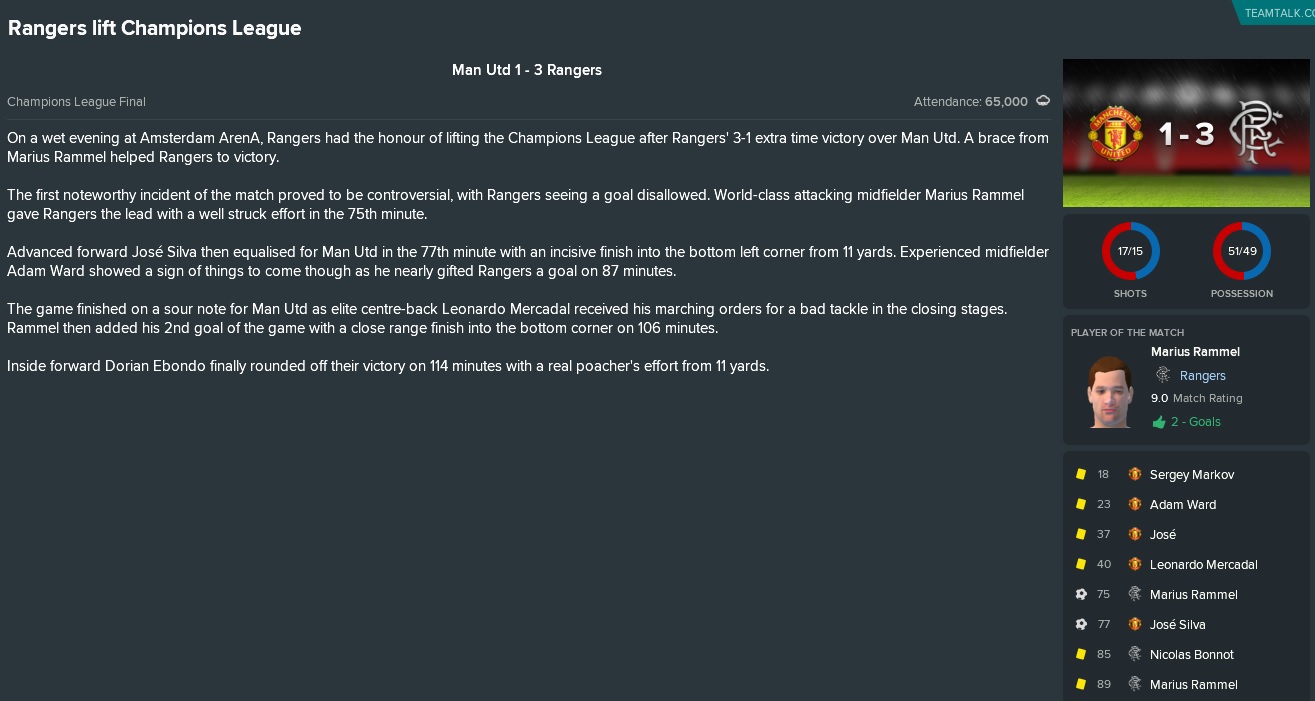 Our fifth Champions League trophy in 8 seasons and the sixth season in succession we made the final.
Shedender 14-08-18 - 15:27

Eh yeah it makes sense, i've enjoyed not having to update monthly and having to stop the game when yo're in full flow, however doing season updates on fm19 for an online game should be quite good.

Yeah it means whenever you're in excellent form you don't need to stop the save so you can upload and potentially "scud" the form. I mean at one stage I went 123 games unbeaten between 17/5/45 and 15/12/48 so that would've been around 2 and a half years without losing a single league game and people probably would've accused me that I was "cheating" on the save which obviously I don't see the point in doing so.

We've now lost 3 games in the last season and a half.

Great work getting so far into a save @Shedender shame it never turned into a career of any sorts.

As I'm sure I've mentioned in the past, due to use dominating the Scottish Premiership the last 9 years (and previous seasons as well) I'm sure people would've got bored following the career but it's actually been nice just playing a career without the need to stop playing and uploading onto Susie. Will I return for FM19? Probably.
Shedender 14-08-18 - 10:31

Still managing Rangers and still dominating domestically. We're on course for a tenth consecutive Scottish Premiership title and I'm still enjoying the save regardless of how much I've been dominating in the Scottish game. I've guided Rangers to the last five Champions League finals - back-to-back-to-back wins and then back-to-back runners-up. I've won the last four Scottish Cups and the last seven Scottish League Cups.

These were my transfer dealings for season 33 (as of post January transfer window):

Wow, that second lot of results looks like a screenshot from a @Shedender story

You've already mentioned the two I'd like to be return/get sorted @Suffolk Seasider.

I don't think SI can do anything about it but I'd love players to stop gurning about their "lack of first team football" when the campaign has ended and I'd also love players to stop gurning about wanting to leave the club literally months after joining just because some club (e.g. Real Madrid) have become a little interested but will never actually make a move.
Shedender 27-07-18 - 12:55

Pfft, I haven't got a baldy what type of saves I'll be doing whenever FM19 comes out. At the moment I'm still managing Rangers (and enjoying it!) but I don't think I'll be managing them on next years game due to currently managing them for 30+ seasons - I would normally manage my local side Bangor but due to failing to get promotion from the Ballymena & Provisional Intermediate League Premier Division, they won't be playable again.

Always struggle to manage Newcastle for some reason, maybe next season will be the time I manage them.
Shedender 22-07-18 - 14:36

and I'm only staying put (even though we're dominating domestically and in Europe) is because I'm due to leave Ibrox for a brand spanking 97k+ all seater stadium and I'd love to manage at least one season in the new ground.
Shedender 13-07-18 - 14:17

It's a bit of a joke that someone like Ludogorets has to begin in the first qualifying round.