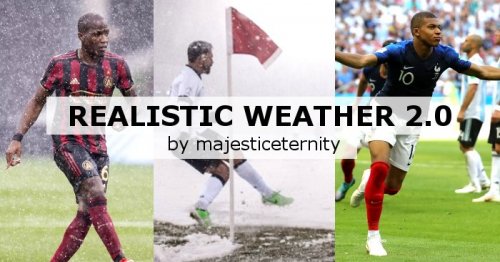 Real-life annual weather data from weatherspark.com and climatestotravel.com was used to optimize current weather patterns, and create new ones.

This file will do 2 things:

1. Help give the feeling of being in different countries. No longer does every region have a similar type of weather. For example, the Brazilian Amazon's Spring is now only 20% likely to be dry, instead of the original 60%(be prepared for delayed games!). It feels much more "tropical". The Spanish coast highly contrasts it, being most often very calm, dry, and mild. Originally, France used England's weather, and was 75% chance to be calm wind. Now, a match in France is 80% likely to be anywhere from breezy to extremely windy. Mexico will now either by dry or stormy. Swedish coast in the spring is no longer mostly 7-13 C, but can be anywhere from -7 to 21 C.

2. It will also, in some regions, increase whatever effect weather already has. Russian Siberia's winter is now TRULY cold, so if cold has ANY effect in the ME, it will be more apparent. Originally, winter in the Siberian region was mostly 0 to -7. It now is mostly -16 and below. On the other side, Mexican desert originally only reached 34 C at times. Now it can go above 43 C.

Can you battle the down-pour from Kyushu, Japan's typhoon season, the below -20 temps in Russia, the sweltering heat of Mexico, or the hot summers and monsoons in Senegal? Or do you prefer the mild, sunny Mediterranean side of Spain?

Many thanks to majesticeternity from the SI forums for allowing me to share here.

HOW TO INSTALL
Place the downloaded file into the following path....
Sports Interactive/Football Manager 2020/Editor Data

Since it's a .fmf file, I presume you place the file in My Documents\Sports Interactive\Football Manager 2020\editor data\. Then when starting a new save, you tick the file to be loaded.

this will work go with other add on and other league pack .. planning for long save this way ask

Yes it will work with other files.

can you let me know what differences using this file we would see in the game? thanks!

There's a long explanation in the main post, is that not enough?

14 years ago
12 hours ago
6,234
28 Dec 2019 22:34:48
Affects fitness and potentially the tactics you will need to play in certain conditions. I've loved having it. Think SI need to incorporate this file every year.

Does this require an update to make it compatible with 20.3? It's less obvious to check compared with competition names/colours, etc.

Thanks for this, it always bug me when I play out a season in country with decent climate and it has most of the games teaming with rain!

I look forward to your work for FM21.

Thanks for this, it always bug me when I play out a season in country with decent climate and it has most of the games teaming with rain!

I look forward to your work for FM21.