2 minutes ago
Asket commented on: Facepacks Release thread - NO REQUESTS

2 minutes ago
Asket added a download: Smolevichi Teampack 36 minutes ago
A new version of our data update was released with 219366 changes from 778 contributors.

2 hours ago
Kinkladze10 commented on: Football Manager 2020 realistic match engine patch 2 hours ago
A new version of our data update was released with 219300 changes from 778 contributors.

2 hours ago
t.marinov commented on: Facepacks Release thread - NO REQUESTS

2 hours ago
t.marinov added a download: Bulgarian Mixpack 3 Mixpack 3 hours ago
A new version of our data update was released with 219271 changes from 778 contributors.

4 hours ago
Asket commented on: Facepacks Release thread - NO REQUESTS

6 hours ago
Asket commented on: Facepacks Release thread - NO REQUESTS 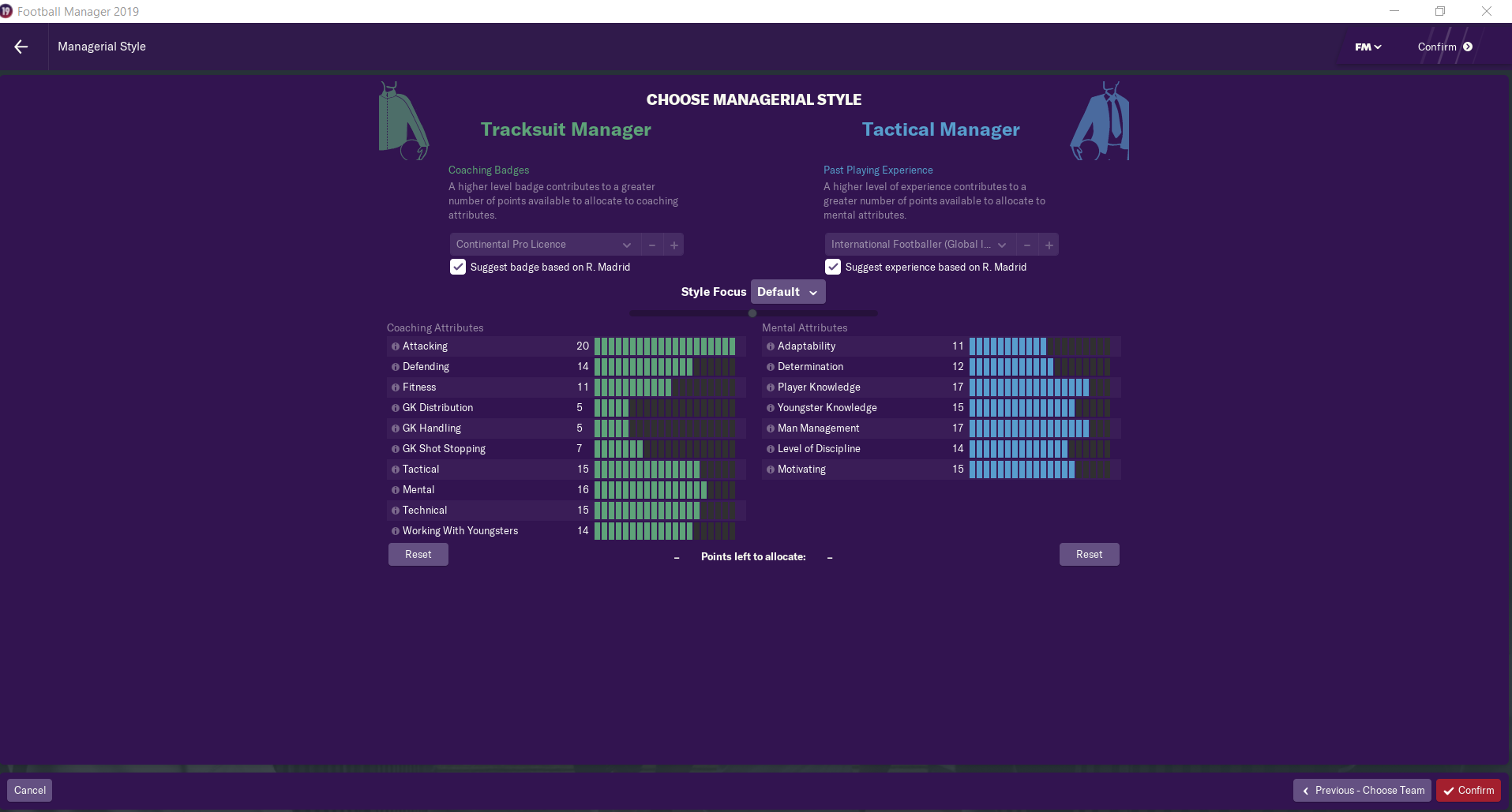 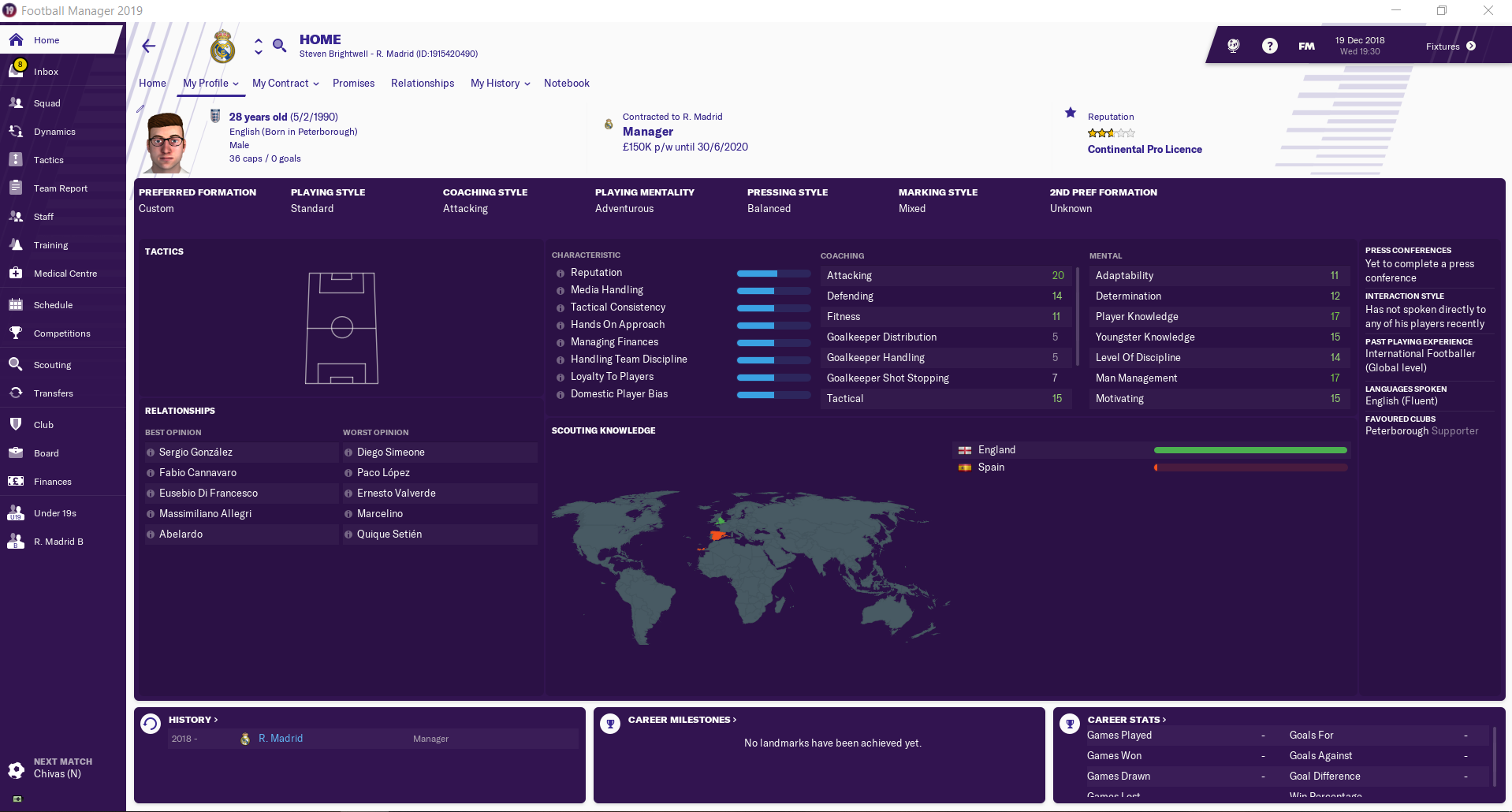 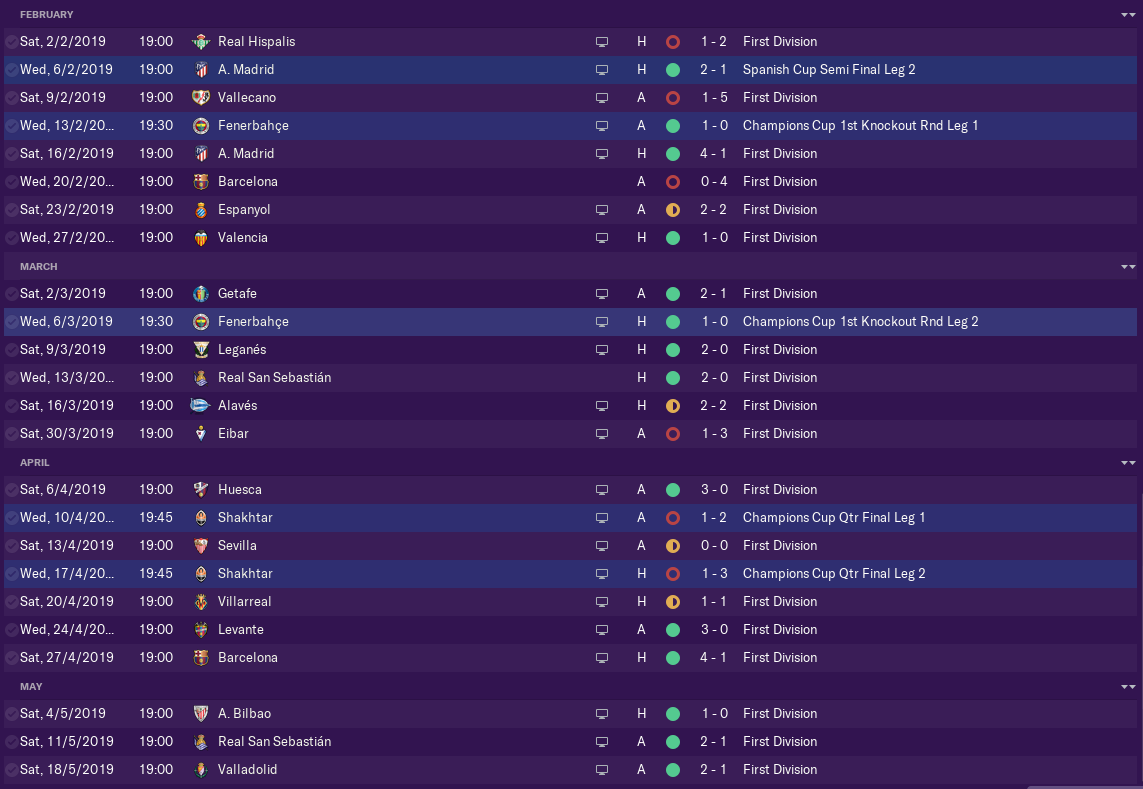 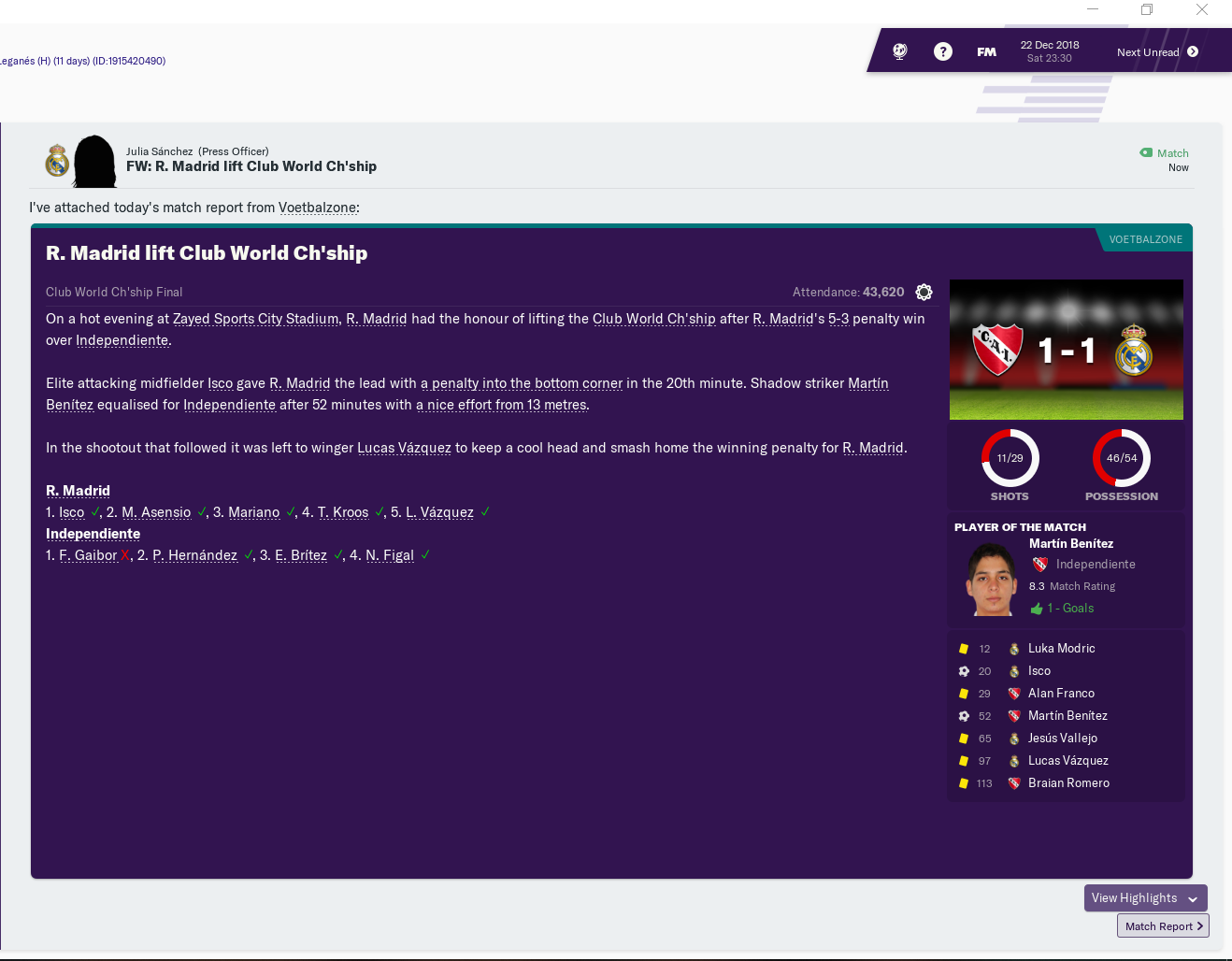 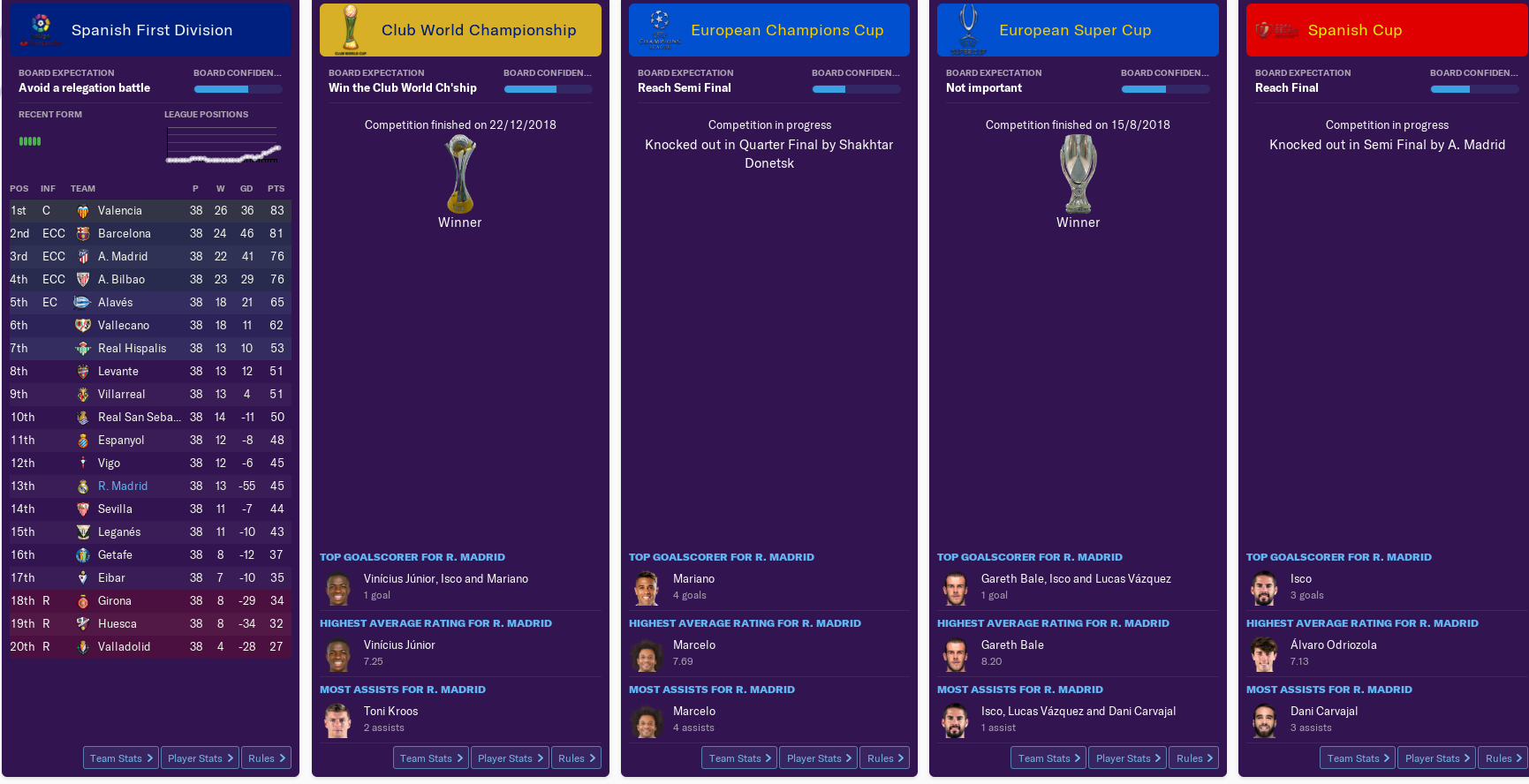 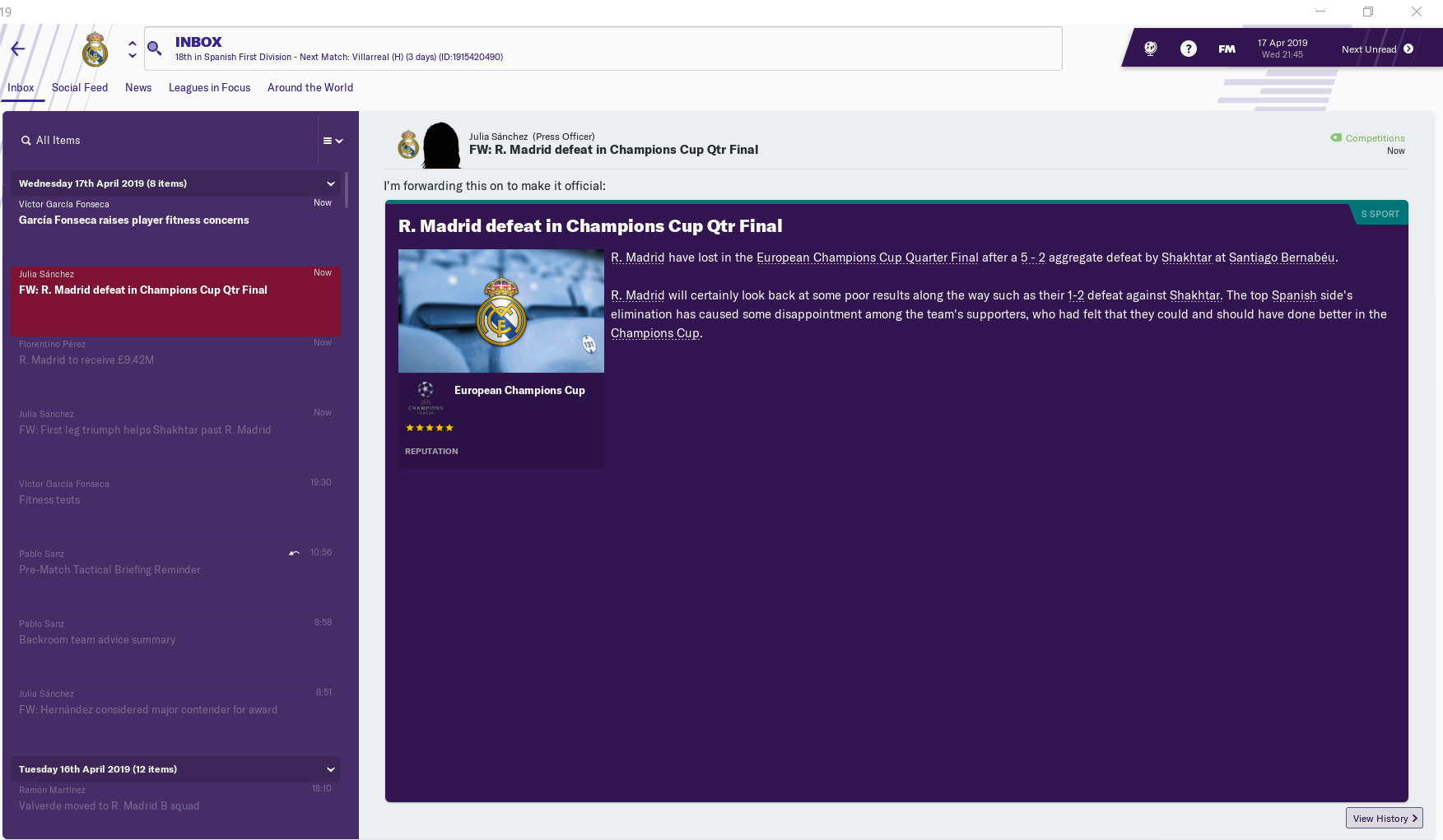 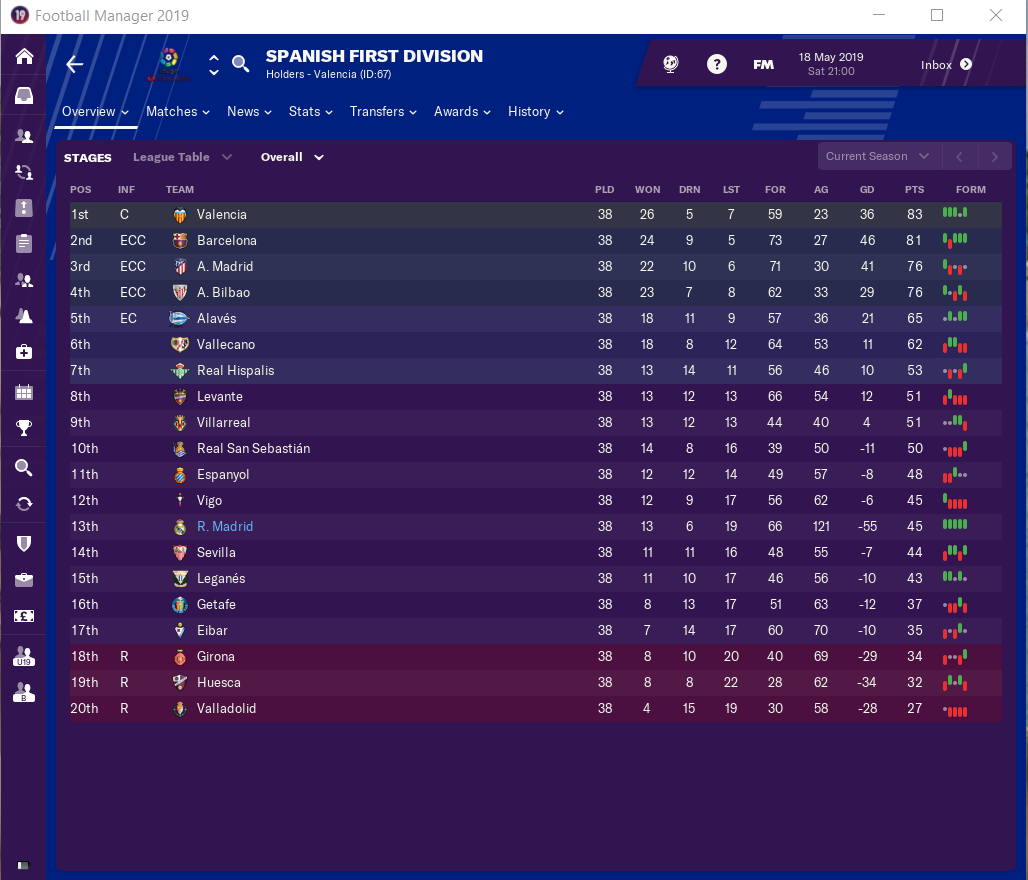 Started off slow, trying to turn the Morale around but thankfully unlike the MLS task I finished the season in good form. 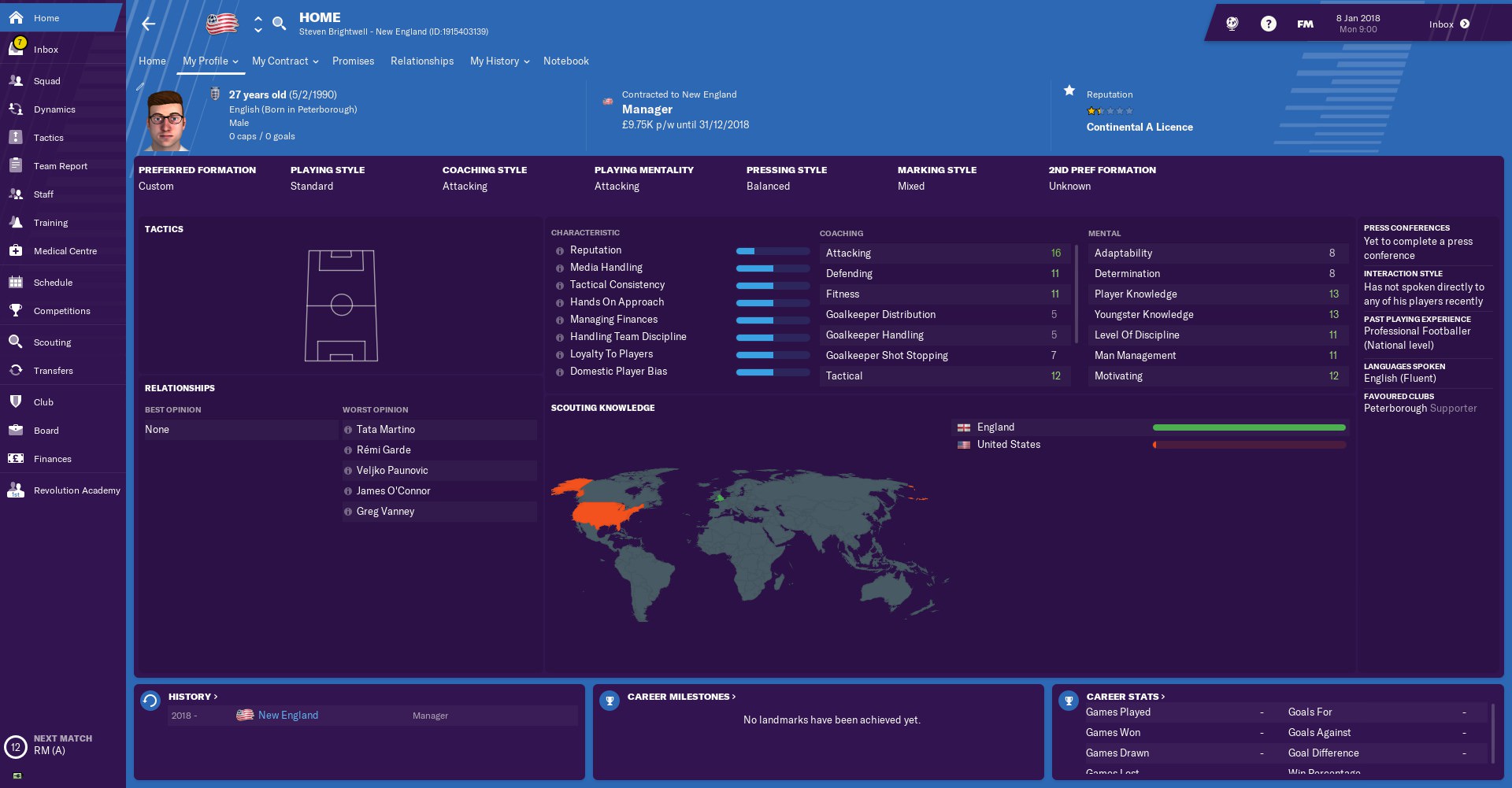 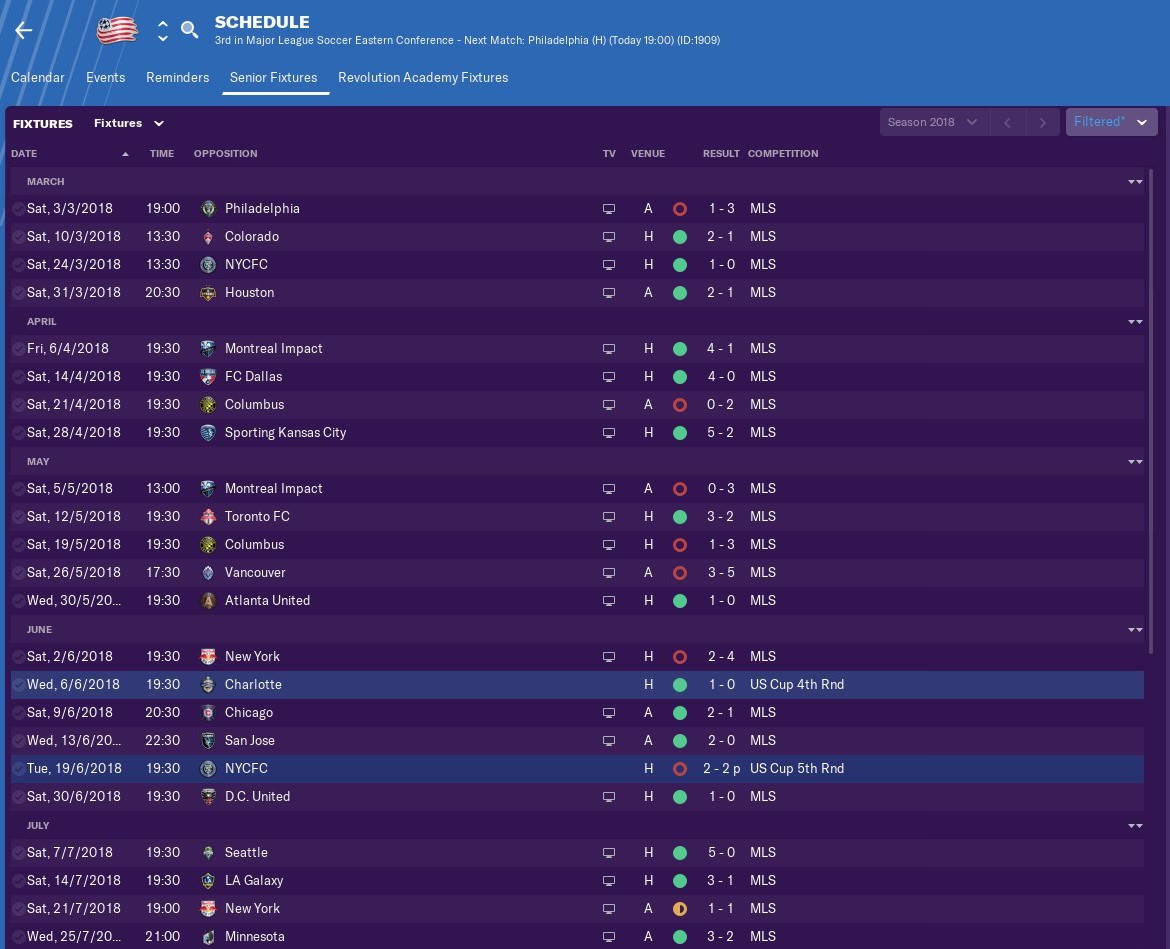 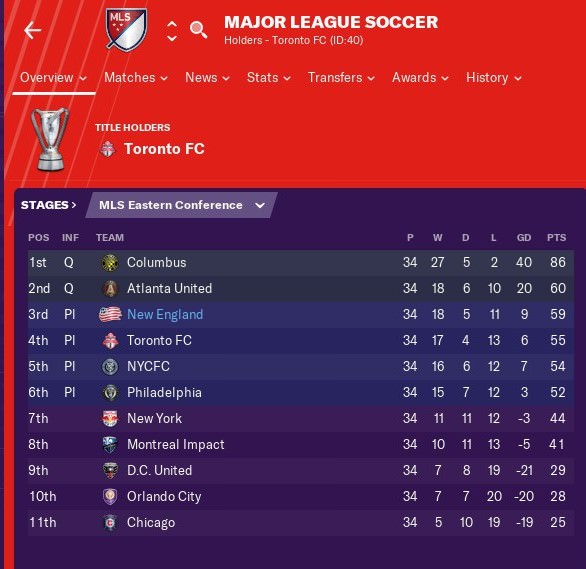 Not Overly familiar with playing in the MLS, so was a bit cautious in terms of signing etc.
But as a whole I was happy with the outcome, despite throwing away a 2nd place finish in both the Conference & Shield with a bad run of form at the end of the season

Anyone else finding it really hard this year?

I've started about 10 saves, with different teams and divisions, but I have yet to make it to the end of the first season without being sacked, most of the time I have barely made it to Christmas
MCMXC 15-11-15 - 08:51

Is there any way to get easily notified when a new update comes out?

Also when players get requested to be cut in the request section, do they get added to the mega pack for the next subsequent release?
MCMXC 23-10-14 - 22:27

End of my first season in charge in Holland and it started out really well going undefeated all the way through friendlies, and the first few months of the season, until we were battered 6-1 against Ajax. I have to say the most pleasing result was the easy of our 12-4 agg victory against Nice to reach the Group Stages of the Europa League.


We were able to pick ourselves for a few more games before a poor December and a disastrous February, which ultimately made the title a little bit out of reach but we were still in contention for the 2nd Champions League spot, but some frustrating results in the last few weeks meant we had to settle for a disappointing 5th. I was very happy with our time in Europe, the Huge play-off win against Nice and then brilliantly topping our group, having only been the 3rd seeds. I was a little disappointed that we got knocked out the Sociedad as i felt if we hadn't of played them in Feb we could have beaten them. We had a fairly easy run in the Dutch cup, with the only real competition we faced was the holders and future league champions, AZ, in the Quarters, where we had built up a 4-0 lead after 30 mins and maintained that until 20 mins to go when they bit back and it ended 4-4 and us winning on penalties 8-7. That experience of shoot-outs probably helped us to win the cup, when we were able to come out on top of the marathon shoot-out that happened in the Final, with us picking up the Trophy as a result of the 27-26 shoot out win. Rivals wise we only played 4 matches and so only amast 10 points for our win against Ajax. Season 3 was just a disaster for both myself and the rest of the so called big 4!

We won the Super Cup at the 3rd time of asking but was pretty much the only joy of the season.

Our first foray in Europe after the ban started alright as we made the Group Stages with wins over Olympiacos & Napoli, buthen no points picked up in our Group.

As defending Champions of the Turkish Cup, i would have liked to have done better then we did, Sadly going out in the fifth round, Only Galatasaray & Beşiktaş of the Big 4 made it to the Groups and with only the latter getting out of it.

The poor season for the top teams continued in the league, where we only managed to finish 5th, thankfully qualifying for Europe but it was looking so much worse around Christmas. None of 4 big teams managed to make it into the top 2 at any point in the season and only 6 match-days ended with one of us in 3rd!

Thankfully i can make my exit from the team after the poor season and hopefully will have a better time on the next leg.

I reckon it be nice to take a trip over to Wales or N Ireland in the next leg, before continuing west to one of the American continents after that. Season 2 was littered with inconsistent performances for the rest of 2014, but the turn of the year saw an improvement

Just like last year we started out with some horrible friendly results and a Penalty shoot out defeat to a rival in the Super Cup. The League was slightly disappointing but results improved to finish the season as Runners Up and a place in the Champions League following the end of the European ban. But as defending champion we didnt even spend an hour in top spot

The team looked determined to make amends for the horror show of finishing bottom of the group last season and lifted the Cup in April and also made amends of the Penalty defeat to Beşiktaş in the Super Cup by not only beating them in the final, but also by winning 2 shoot outs on the road to the Final.

2014 picked up again and the league title looked like it was virtually in our grasp and a high possibility of breaking the 100 goals mark, but 3 defeats in a row in April nearly threw it away.

We also picked up more victories over our rivals this season, but that was helped by Trabzonspor having a shocker and finishing bottom of our Cup group, but also by them narrowly avoiding relegation from the Super League with only a couple matches to go.


So I make that a slightly better 70 points for the hitch-hiker, giving a total of 112 points with the final season still to play. My target is to get at least 88 points in year 3 so I can complete my first leg of the tour with 200 points The Susie tour managed to pick up a hitch-hiker whilst it was in Turkey in the form of MCMXC.

He took the rains of Fenerbahçe S.K. and had a roller coaster of a first season in charge.

It started out with some horrible friendly results and a Extra time defeat to a rival in the Super Cup. The League seemed to be going pretty well until a awful win less 30 days which produced 3 defeats and 2 draws, and at the halfway stage in the Group of death in the Turkish Cup, the table was looking bleak!!

2014 picked up again and the league title looked like it was virtually in our grasp and a high possibility of breaking the 100 goals mark, but 3 defeats in a row in April nearly threw it away.

But we held on to win the title.

The process of making this ageing foreign side both younger and more Turkish has began with the signing 2 younger Turks for total fee of 8.35 Million Only subtle changes but i would like there to be a red and green arrow for subs to appear in the timeline on a match day, as well as it saying saved penalty instead of missed if the penalty was on target and not blazed high/wide, just to give the GK's a bit more credit.
I also agree i would love to editor to be updated and a bit easier to use. Also i know its probably not going to happen but more "official" playable leagues and licenses.

I'm completely baffled as to what the score is in my match! It apparently ended as a 3-0 defeat!

The last few weeks, my fm13 has frequently crashed if i get an injured player in a match. I make the substitution but it always freezes after confirming the change and then i have to close fm and load it up again, anyone else having this or know why?
MCMXC 13-11-12 - 16:13

Yeah ive just been struggling in to win anything else in Ireland as Shamrock have won the league by a country mile about 10 yrs in a row!
MCMXC 31-10-12 - 12:34

During that 2nd season we hit a bit of bad form just in the run in so finish again a consistent 5th. The third season i thought was to be the year to kick on with the silverware. All was going well and we were sitting top in may when our star striker McGoldrick sustained a injury that was to put him out of action for 11 months, that coinciding with the English transfer window opening to poach some of our other players caused us to go on a bad run, and it was to be yet again a 5 team battle for the playoff. Having narrowly lost out in a semi final replay to the reigning champions Derry in the Challenge Cup, we found faith and belief and our form started to be consistent again leaving it a straight fight between us and Limerick, knowing a win for us and them failing to win would set up a home playoff showdown against our bitter rivals Longford who had gained promotion the season before. An own goal by the champions gave us a 1-0 victory whilst Limerick suffered a 10 man defeat to Wexford, setting up that big local showdown on goal difference. During the playoff match our player of the season got sent off just before half time and not too long after the break we were behind, until the 77th minute when we clawed back an equalizer, 5 minutes later we had a debatable offside goal disallowed leaving the game to have another 30 minutes to play.With the first half of ET staying goalless it made a very tense end to end battle to the 2nd half of ET only for us take the lead after 107 minutes before we were given another sending off, leaving us the last 5 minutes of extra time to hang on to the lead with a 2 man deficit, before the crowd errupted the the final whistle was blown, with promotion achieved! I decided to start in the January so i had the whole of the 2012 season to play as, with the vacant job at Athlone Town, and only manged to finish 5th in the First Division and really didnt make any impact in the cups. This second season is nearly coming to the conclusion and has gone alot better in the newly expanded league, with the top 5 teams having been a tight breakaway group all season, hoping to nick the playoff spot.
MCMXC 30-10-12 - 11:33

You don't need to write a thread for the challenge buddy, however I will still need to see screenshots of your manager at the start of the game (his rep) and then when you win a trophy I would like to see the message screen saying you won it and either the league table or match overview for a cup final win

let me know if you wish to join the challenge

Cool, yeah i do i gave it a shot in 11 and was defeated so thought id give it a go. Oh, i'm already in my 2nd season

But i did notice that you can see you past exp on your profile page in this version, so hope that would be alright. Same, still awaiting for my code, but have got work in an hour so will see what the situation is tomorrow!
FM2021 SALE